When the head of the Federal Bureau of Narcotics heard about the Licata case, he knew it was the break he'd been waiting for.

Tampa police arrived at the Licata residence one afternoon in October 1933. Neighbors in the tightly-knit immigrant community were concerned. No one had come in or out of the Italian-American family’s home all day, which was strange, considering the school-aged children, and that the father, Mike, ran two bustling barber shops.

Licata was determined to be suffering from “dementia praecox.”

When the police opened the door, they found carnage. Twenty-one year-old Victor Licata had murdered his family with an axe the night before – his parents, one of his brothers, and his younger sister were all dead and another younger brother would be soon. Victor was discovered in the bathroom, curled in a chair, murmuring incomprehensibly. His family was trying to dismember him, he said, and replace his arms with wooden ones.

According to Larry Slomans’s book, Reefer Madness, shortly after the murders, Licata was evaluated by psychiatrists and determined to be suffering from “dementia praecox,” (now known as schizophrenia). The doctors speculated that his condition was congenital. Two cousins and a great uncle had been committed to asylums, his brother also suffered from “dementia praecox,” and his parents were first cousins. The police had been trying to have him committed for over a year, but stopped when his parents said they would care for him at home.

The case would have slipped largely unnoticed into grisly small-town lore if it were not for one detail. According to the local newspaper, at the time that he committed the murders, Victor Licata had been “addicted to smoking marihuana cigarettes for more than six months.”

After prohibition ended, bureaus like Anslinger’s were threatened by obsolescence.

Four years later when Harry Anslinger heard about the Licata case, he knew it was the break he had been waiting for. Anslinger had recently been appointed head of the Federal Bureau of Narcotics (the precursor to the DEA) after making his name as a temperance hardliner during prohibition. But as Johann Hari explains in his book, Chasing the Scream: The First and Last Days of the War on Drugs, after prohibition ended, bureaus like Anslinger’s were threatened by obsolescence.

Anslinger’s office was focused on narcotics like cocaine and heroin, but these drugs were only used by a small minority. In order to ensure a robust future for his bureau, “he needed more,” Hari writes. Marijuana was used more widely.

Anslinger consulted 30 doctors about the drug’s connection to violence. All except one told him there was none, so he bucked the other 29 and trumpeted the findings of that one doctor. Anslinger warned in a congressional hearing, “Some people will fly into a delirious rage, and they are temporarily irresponsible and may commit violent crimes.”

His anti-marijuana push was driven by racism. “Reefer makes darkies think they’re as good as white men,” he was quoted as saying, and “There are 100,000 total marijuana smokers in the U.S., and most are Negroes, Hispanics, Filipinos and entertainers. Their Satanic music, jazz and swing result from marijuana use. This marijuana causes white women to seek sexual relations with Negroes, entertainers and any others.”

Crusaders switched from calling it “cannabis” to “marijuana,” hoping to capitalize on anti-Mexican sentiment.

Beginning in 1939, immediately following her performance of “Strange Fruit,” Anslinger began ruthlessly targeting Billie Holiday who was rumored to have a heroin addiction. Those closest to her believed Anslinger’s campaign created an enormous strain, contributing to her early death. During this time, anti-drug crusaders switched from calling it “cannabis” to “marihuana” or “marijuana,” hoping the Spanish word would capitalize on anti-Mexican sentiment.

At hearings in 1937 on a bill to prohibit marijuana, Anslinger was asked for “horror stories” proving the marijuana-violence connection. Two weeks later, a letter from the chief inspector at the Florida Board of Health arrived telling the story of Victor Licata. The inspector also sent along a picture, presumably the young man’s mugshot, which had been circulated widely in the Florida dailies. In the photograph, Licata is crazed violence incarnate, his wild-eyed stare entirely unnerving. This would be the face of Anslinger’s marijuana crackdown. 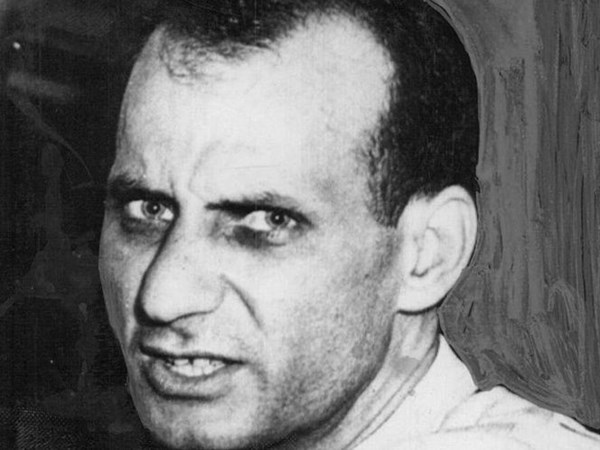 Anslinger began giving speeches and writing articles on the dangers of marijuana, harping on the Licata case. “You smoke a joint and you’re likely to kill your brother,” he said. In his most famous article, “Marijuana – Assassin of Youth” published in the American magazine, Licata is transformed from a congenitally mentally ill person into “a sane and rather quiet young man” whose reefer-toking had turned him into an axe-wielding murderer – not his schizophrenia.

Anslinger succeeded in turning marijuana into a national issue. By 1938, the film Reefer Madness had been purchased by a new director and was being circulated more widely, warning of the “frightful toll of a new drug menace which is destroying the youth of America … The Real Public Enemy Number One!”

In the coming years, hundreds of thousands of men and women would spend huge portions of their lives behind bars.

In the 1930s, The New York Times ran dozens of articles about police crackdowns on “marijuana rings,” whereas in 1926, the paper ran an article titled, “Marijuana Smoking Is Reported Safe.”

The Marijuana Tax Act, legislation that Anslinger drafted himself, was passed in 1937, effectively making the sale and possession of marijuana illegal across the country. In 1950, Victor Licata hanged himself with a bed sheet. Meanwhile, Anslinger’s bureau flourished.

According to Hari, “within thirty years, he succeeded in turning this crumbling department with these disheartened men into the headquarters for a global war that would continue for decades.” In the coming years, hundreds of thousands of men and women – disproportionately people of color – would spend huge portions of their lives behind bars.

Laura Smith is a staff writer @timeline and a freelance journalist based in Oakland, California. Her nonfiction book, The Art of Vanishing, about the disappearance of Barbara Newhall Follett will be out from Viking in 2018.