Free Enterprise Is the World's Only Successful Strategy for Reducing Poverty

Unlike socialism, capitalism helps the poor, and here are the numbers to prove it.

In prior years, I’ve shared some videos with powerful messages with a common message. Grinding poverty used to be the normal human condition, but then rule of law and limited government enabled a dramatic increase in prosperity.

All these videos are worth watching. They show that misery used to be pervasive but then we became rich starting a couple of hundred years ago.

But there’s one shortcoming in these videos. They basically tell a story of how the western world became rich. In other words, they describe how North American and Western Europe went from agricultural poverty to middle-class prosperity.

What about the rest of the world? 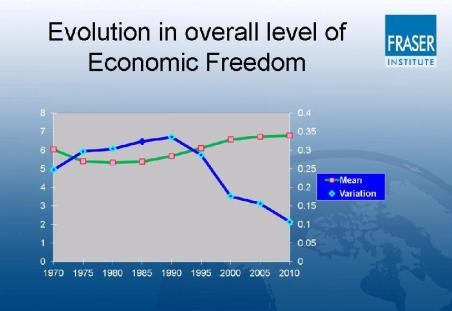 Well, there’s a good story to tell there as well, albeit it’s happened more recently. Back in 2014, I shared some data from Economic Freedom of the world showing how there was a substantial increase in global economic liberty starting about 1980. (For more on poverty under capitalism, see "Extreme Poverty Rates Plummet Under Capitalism.")

Yes, there were improvements in western nations during that period (thanks to Reagan, Thatcher, etc), but there were also improvements in economic freedom elsewhere (collapse of the Soviet Empire, reforms in what used to be known as the Third World, etc).

In this video from Prager University, Arthur Brooks of the American Enterprise Institute explains that this shift to free enterprise is what produced greater prosperity all across the world.

By the way, folks on the left (see this Salon article) don’t like the fact that the world shifted in the direction of economic liberty.

They grouse that the developing world was subjected to a “Washington consensus” that imposed a “neoliberal” agenda (with neoliberal meaning “classical liberal“).

But here’s a visual showing how a shift to capitalism was great news for the less fortunate. The number of people in extreme poverty has dropped dramatically since the early 1990s.

I wish the data went back to 1980, but even these partial numbers are a tremendous confirmation of the hypothesis that free markets are the best way of helping the poor.