Originality isn’t about doing what’s never been done in a strict sense, but it’s about the unique way in which each individual gives expression to his or her artistic influences.

According to Austin Kleon’s Steal Like An Artist, the so-called “original” thinkers and creators are simply people who effectively learned to remix other people’s materials.

Originality isn't about doing what's never been done. It's about the unique way you give expression to your artistic influences.Originality isn’t about doing what’s never been done in a strict sense, but it’s about the unique way in which each individual gives expression to his or her artistic influences. Quoting Jonathan Lethem, Kleon argues that “when people call something ‘original,’ nine out of ten times they just don’t know the references or the original sources involved.”

It’s a simple idea, but not as simple as “copy the people you like and you’ll be an instant genius.”

The kind of stealing Kleon refers to is not about pretending you came up with somebody else’s idea or just modifying a few details. It’s about being strategic and selective with the process of choosing your influences, taking what resonates with you, making other people’s ideas your own, and being diverse enough to find unexplored points of intersection between your various influences.

If you fall in the category of people who want to write a book, learn an instrument, start a podcast, or do something creative, but you’re wrestling with the fear of not being good enough or original enough, Steal Like An Artist is a great book for helping you get started. It’s an easy read and there’s no complex jargon to navigate, yet Kleon offers some highly digestible and pragmatic insights for the beginning creator.

Here are five insights I’ve distilled from Steal Like An Artist:

1. If it’s powerful enough to distract you, don’t ignore it. Harness its power. 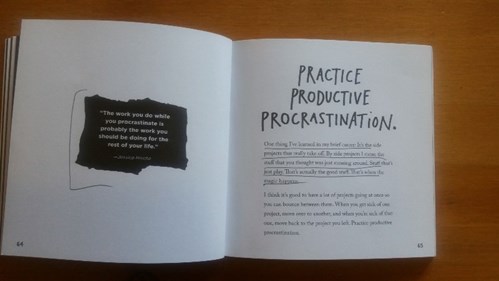 One thing I’ve learned in my brief career: It’s the side projects that really take off. By side projects I mean the stuff that you thought was just messing around. Stuff that’s just play. That’s actually the good stuff. That’s when the magic happens. – Page 65

People often ask me “What are some great books to buy?” My response is usually “The ones you’ll actually read.” Doing a bunch of activities that you think are important will almost always be less impactful than doing the stuff that genuinely fires you up. It’s hard to be great at the stuff that requires hard work just to make it tolerable.

If you’re always wondering “How much time do I have before I can stop doing this?” then you’ll almost always come in second place to the person that wakes up in the morning eager to do it. It’s not that passion has some sort of magic power to it, but you’re far more likely to put the work in, make interesting connections, and exercise follow-through if you adamantly believe in what you’re doing.

Jessica Hische wrote, “The work you do while you procrastinate is probably the work you should be doing for the rest of your life.”

2. Even if you marry a single interest, don’t stop flirting with other passions. 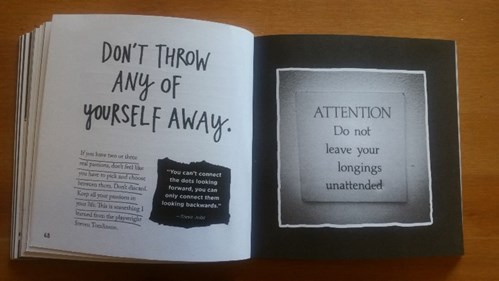 If you have two or three real passions, don’t feel like you have to pick and choose between them. Don’t discard. Keep all your passions in your life…The thing is, you can cut off a couple passions and only focus on one, but after a while, you’ll start to feel phantom limb pain. I spent my teenage years obsessed with songwriting and playing in bands, but then I decided I needed to focus on just writing, so I spent half a decade hardly playing any music at all. The phantom limb got worse and worse.

About a year ago I started playing in a band again. Now, I’m starting to feel whole. And the crazy thing is, rather than the music taking away from my writing, I find it interacting with my writing and making it better – I can tell that new synapses in my brain are firing, and new connections are being made. – Pages 68-71

James Altucher has a neat concept I like called “Masters of the intersection.” The basic idea is that you can become great by taking two or three things you really like and becoming the best in the world at the intersection between those things. This allows you to achieve greatness, not by rising to the top of an existing craft, but by creating an entirely new hybrid craft.

You achieve greatness, not by rising to the top of an existing craft, but by creating an entirely new hybrid.So let’s say you’re really interested in basketball, but you’re not good enough to go pro. Let’s also say you’re really interested in philosophy, but you’re light years away from being the next Aristotle. What if you focused on the intersection of those two fields by philosophizing about basketball? Aristotle never did that. And while you may never beat Lebron James or Stephen Curry in a game of 1-on-1, you might be better than both of them when it comes to the art of philosophizing about life lessons that can be learned from their sport.

This is a simplified example of the art of mastering the intersection. In order to do that, however, you have to stop looking at your various passions as a distraction. You have to be willing to indulge in the things you’re fascinated with even if they have no obvious connection to your job, career goals, or immediate practical concerns. Your seemingly distracting passions might very well be the ultimate means by which you’ll distinguish yourself from everyone else in your field. Don’t become a boring one-dimensional person who only knows how to talk about the one thing you’ve formally studied. Embrace your diverse range of interests and become a master of the intersection. 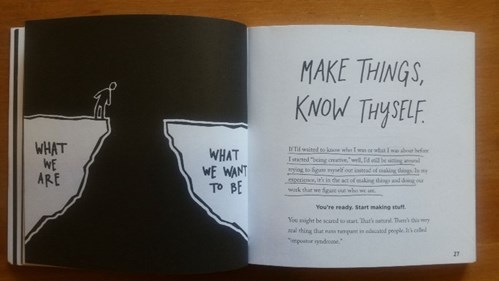 If I’d waited to know who I was or what I was about before I started “being creative,” well, I’d still be sitting around trying to figure myself out instead of making things. In my experience, it’s in the act of making things and doing work that we figure out who we are. – Page 27

So many people get stuck on things like “being a writer” or “being an entrepreneur,” and they never get around to getting things done because they’re too busy trying to figure out if their ontological state gives them permission to do the thing they want to do.

If you're interested in it right now, then that's enough to try it out.Forget about your state of being for a second. Forget about your identity for a moment. Just do something. If you’re interested in it right now, then that’s enough to try it out. You’ll discover the most valuable information about yourself, not by naval gazing and analyzing your soul all day long, but by getting to know what the creative process actually feels like. The worst thing you can do is make your actions dependent on some rashly established axiomatic understanding of what your identity is.

Your sense of self will evolve and expand until the day you die. So you’ll be waiting around forever if you insist on knowing who you are before beginning the work you feel compelled to do in the moment.

Work. Risk. Try. Create. Experiment. Test. Move. Do. Knowledge of self is the effect, not the cause of all these things.

4. Read like your sense of creativity depends on it. 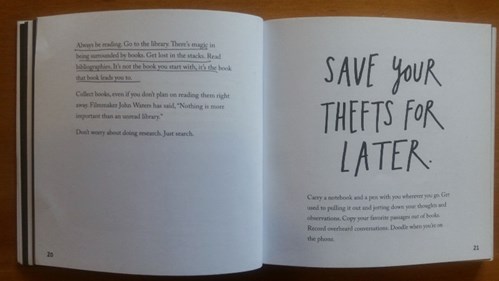 Always be reading. Go to the library. There’s magic in being surrounded by books. Get lost in the stacks. Read bibliographies. It’s not in the book you start with, it’s the book that book leads you to. – Page 20

Books are written by people. That makes them personal, not impersonal. Reading books is like hanging out with a person except for the fact that you can still learn from this person even if they don’t like you. Books are the cure for artistic solipsism. It keeps you from seeing the world as if your vantage point is the only one that exists. Everything that you take for granted as being certain, fixed, impossible, ugly, difficult, or boring is seen in an entirely different way by someone else. Avail yourself of those perspectives. 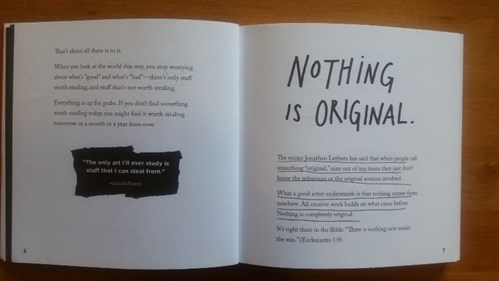 Nothing is original. The writer Jonathan Lethem has said that when people call something “original,” nine out of ten times they just don’t know the references or the original sources involved. What a good artist understands is that nothing comes from nowhere. All creative work builds on what came before. Every new idea is just a mashup or a remix of one or more previous ideas. – Pages 7-8

Originality is how you uniquely put things together. You didn’t create the alphabet, yet you have a unique way of using language that differs from your peers. When a musician composes a song, they don’t feel pressured to invent the notes on the piano or to create a new instrument. They can simply work with what’s already there and put their own unique twist on it.

When you were a baby, you learned how to talk by copying the adults around you and you kept adding to your repertoire of influences. That’s also how you learn to create. Keep consuming the stuff that you like in order to add to your pool of influences and keep pushing yourself to create on the go. As you do this, your unique style will emerge through spontaneous order.

Eventually people will start to accuse you of being an original too.

This first appeared at The Mission.

T.K. Coleman is the Education Director at FEE. In addition to delivering compelling workshops on entrepreneurship, creativity, and economic thinking to HS and College students around the country, T.K. is also a co-host for The Minimalists Podcast.