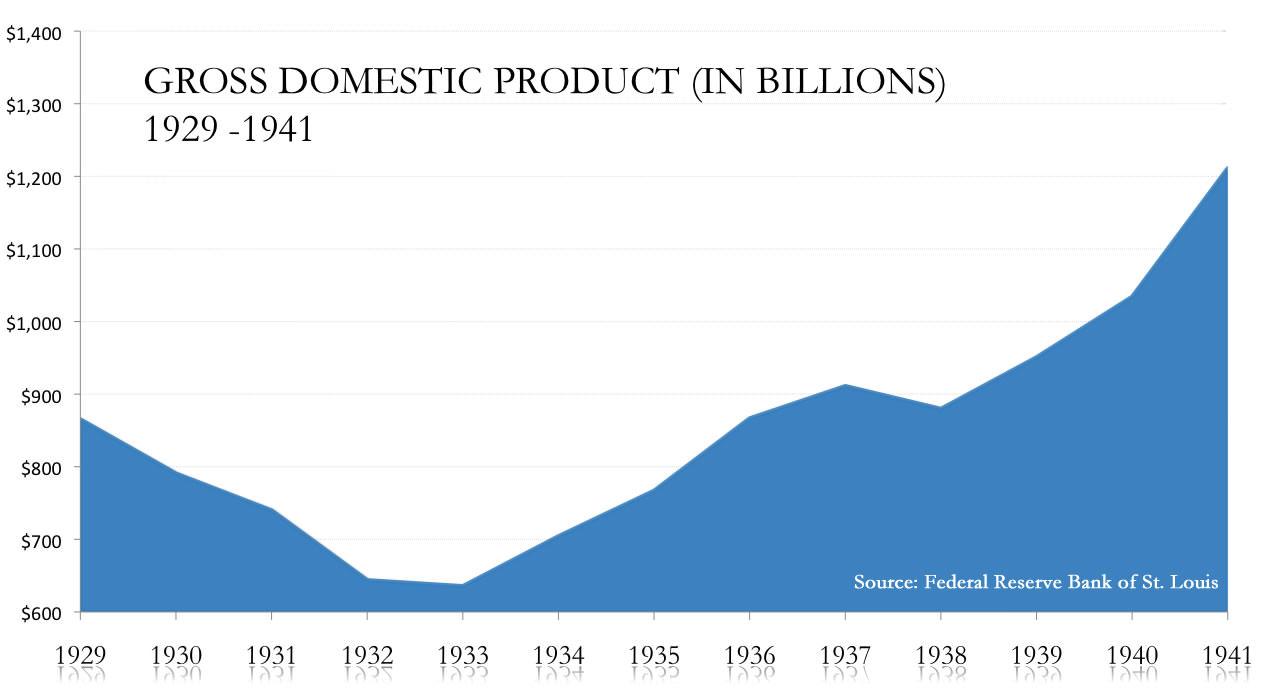 On his New York Times blog page, Paul Krugman displayed a graph showing that the post-1929 U.S. economy began to expand before Franklin Roosevelt took office. Certainly the economy was recovering before any of FDR’s policies had time to play out through the large and complex U.S. economy.

During 1933, Roosevelt’s first year in office, GDP increased about 17 percent. What would have accounted for that?

Not FDR’s 1933 decision to seize privately owned gold and devalue the dollar from $20 per ounce of gold to $35. This increased the value of gold held by the U.S. Treasury and entitled it to print an additional $3 billion of greenbacks. The Thomas Amendment to the Agricultural Adjustment Act (AAA) authorized the Treasury to print $3 billion more. Nonetheless, the total amount of currency held by the public didn’t increase until 1934. The Fed wasn’t very active during this period.

The most sweeping pieces of legislation passed in 1933—the climax of the Hundred Days—were the National Industrial Recovery Act (NIRA) and the Agricultural Adjustment Act, but both promoted contraction, not expansion. The NIRA authorized FDR to establish cartels fixing wages, prices, and output. The AAA aimed to reduce agricultural acreage.

It’s not clear how any of FDR’s 1933 policies could have accounted for a 17 percent increase in GDP, even if they promoted expansion, because they wouldn’t have had time to ripple through the economy. It seems more likely that FDR had the good fortune to come into office near the bottom of the Depression, and enough adjustments in wages, prices, and other factors had occurred that the economy was ready to recover. The economy had recovered from previous panics, crashes, and depressions without a big-government program. Undoubtedly FDR’s sunny personality and formidable communications skills helped give people confidence they could achieve a turnaround.

From 1933 to 1937 GDP increased about 60 percent. This was the biggest GDP expansion of the New Deal—and it occurred without federal spending and deficits that would qualify as Keynesian stimulus. Krugman wrote, “[T]he New Deal didn’t pursue Keynesian policies. . . . [F]iscal policy was only modestly expansionary.” Other economists, such as Price V. Fishback, agree that New Deal budget deficits probably didn’t contribute to recovery—Fishback calls FDR’s deficits “tiny.”

Since the NIRA and AAA promoted contraction, the Supreme Court gave the economy a boost in 1935 by striking them down. Ironically, FDR viewed the anti-New Deal justices as the “Four Horsemen of Reaction.”

It has often been said that the depression-within-a-depression of 1938 happened because FDR foolishly cut federal budget deficits, but that couldn’t have been the case since the dramatic 1933–1937 expansion occurred without meaningful deficit stimulus. Other factors help explain that depression, starting with the newly centralized Federal Reserve Board’s decision in July 1936 to increase minimum required bank reserves 50 percent and its decision in January 1937 to increase bank reserves another 33.3 percent. Suddenly, less money was available for lending, and interest rates went up—a double whammy for employers. The Social Security excise tax on payroll began to be collected in 1937, making it more expensive for employers to hire people. The undistributed profits tax became a big issue in 1937. The Supreme Court upheld the Wagner Act in 1937, setting off the rapid unionization of mass-production industries, which led to an 11 percent increase in wage costs during that depression year—and a resulting surge in unemployment.

The problem with the New Deal wasn’t expansion. The problem was the persistence of high unemployment despite expansion. Many economists point to New Deal laws such as the NIRA, the Wagner Act, and the Social Security payroll tax (there weren’t yet any Social Security benefits), which made it more expensive for employers to hire people. Whenever anything becomes more expensive, there’s likely to be less demand for it.

In addition, the succession of New Deal tax increases—1933, 1934, 1935, and 1936—reduced private funds available for hiring. And the constant tax changes made it hard for investors to estimate their potential risks and returns, so they remained on the sidelines. Investors, like everybody else, need predictable rules. No wonder investment was at historic lows during the 1930s. Without investment it was very difficult to create new jobs.

When FDR came into office he had Congress and the nation at his feet. He was hailed as a conquering hero. With his rhetorical acumen and political genius, he might have begun by forming coalitions to undo his predecessor Herbert Hoover’s biggest disasters: the 1930 Smoot-Hawley Tariff that throttled trade and the 1932 revenue act that doubled many taxes. Ending rather than embracing Hoover’s disasters would have been change that people could believe in! If, furthermore, FDR had avoided his own misguided policies, the expansion probably would have been more robust, and without the blunders of 1937, it might have lasted longer—and most important, it would have enabled the private sector to create millions more jobs.

Jim Powell, senior fellow at the Cato Institute, is an expert in the history of liberty. He has lectured in England, Germany, Japan, Argentina and Brazil as well as at Harvard, Stanford and other universities across the United States. He has written for the New York Times, Wall Street Journal, Esquire, Audacity/American Heritage and other publications, and is author of six books.