Eugenics, Immigration, and the End of Open Borders

Last week marked the 92nd anniversary of the passage of the Immigration Act of 1924, also known as the National Origins Act. This bill marked the permanent end of America’s nearly open borders policy with Europe. Other previously passed laws like the Chinese Exclusion Act, the Literacy Act of 1917, and the Page Act restricted immigration from elsewhere.

Congress picked 1890 as the target date for the 1924 Act because that would exclude most of the Italian, Eastern European, and other Southern Europeans who came to dominate immigration since then (Charts 1 and 2). The 1924 Act also created family reunification as a non-quota category. 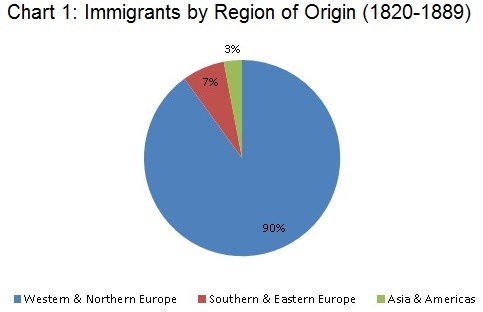 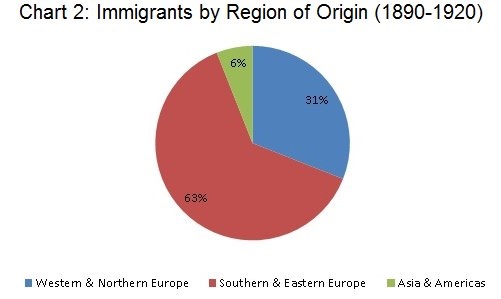 The supporters of the 1924 Act gave several reasons for blocking immigration from Europe.

Prescott Hall, co-founder of the Immigration Restriction League that concocted the national origin scheme, wrote: “Do we want this country to be peopled by British, German, and Scandinavian stock … or by Slav, Latin, and Asiatic races, historically downtrodden, atavistic, and stagnant?”

Representative Albert Johnson, chairman of the House Committee on Immigration and Naturalization, was also the head of the Eugenics Research Association. One of Johnson’s key advisers on immigration was Madison Grant, author of the 1916 best seller The Passing of the Great Race, a tract that denigrated Asians, blacks, and split Europeans along absurdly antiquated racial lines. They wrote Hall’s scheme into law.

Why did the 1924 Act use a complex national-origins system to discriminate (mostly) based on race and ethnicity when they could have just explicitly discriminated based on race and ethnicity? Prominent 1924 Act supporter and New York University sociologist Henry Pratt Fairchild explained the answer to that in his 1926 book The Melting Pot Mistake:

The question will probably at once arise, why, if this legislation was a response to a demand for racial discrimination, was it expressed in terms of nationality? The answer is simple. As has already been shown, our actual knowledge of the racial composition of the American people, to say nothing of the various foreign groups, is so utterly inadequate that the attempt to use it as a basis of legislation would have led to endless confusion and intolerable litigation.

So Congress substituted the term nationality, and defined nationality as country of birth. It is clear, then, that "nationality," as used in this connection, does not conform exactly to the correct definition of either nationality or race. But in effect it affords a rough approximation to the racial character of the different immigrant streams [emphasis added].

Fear of litigation, administrative simplicity, and the knowledge that nationality and race were close enough for this piece of discriminatory legislation to achieve their goals made explicit discrimination unnecessary.

Some of the worst provisions of the 1924 Act were changed in 1952 and the rest of it was obliterated in 1965, with the exception of the immediate family exemptions from the quota. The Displaced Persons Act of 1948 corrected another serious deficiency of the 1924 Act by creating the first refugee law in U.S. history. The Displaced Persons Act was in response to the US government denying Jewish refugees during the 1930s and to help absorb the refugees of communism in the newly declared Cold War.

The brutal justifications for the 1924 Act and its terrible consequences should make us all glad that it’s a dead and buried law.