Commerce and capitalism have done more for women than legislation.

As part of the publicity for her role in the new live-action version of Beauty and the Beast, Emma Watson was photographed for Vanity Fair in a Burberry bolero that left her mostly topless.

Although the reaction most people had to the spread was probably not very dramatic (maybe you thought, like I did, “cute jacket”), there were more than a few responses on social media that criticized her choice as being at odds with her feminist ideals.

In her response to the incident, Watson offered up a simple truism about feminism that is more powerful than it might sound:

Feminism is about giving women choice.”

So, for Hermione’s sake, and in honor of women’s history month, I’d like to talk a little bit about the importance of choice to the expansions of women’s rights that have taken place over the past 200 years.

Some of the oldest and most significant restrictions on women’s choice in American history are those that restricted married women’s ability to own property separately from their husbands. The legal tradition underlying these restrictions was coverture, which declared “the very being or legal existence of the woman [to be] suspended during the marriage.” A favorite quip of historians of the subject is that these laws created a situation in which husband and wife were one within marriage, and that one was the husband.

Although specifics varied by state, this usually meant that married women could not own land or homes in their own names, sign enforceable contracts, stand for themselves in court, or create wills.

Nearly all married women in the United States had the legal right to own separate property and keep earnings acquired during marriage by 1920.

Further, divorce was extremely limited, making it nearly impossible to dissolve a marriage once entered. Limitations on divorce always hit those in the least happy marriages the hardest. So while many couples doubtless enjoyed happy marriages, those who were in less fortunate circumstances were legally bound to remain trapped within them.

The upshot of all this is that 19th-century property law and legal practices made it difficult for married women to make some of the most basic decisions about how they wanted to lead their lives.

Fortunately for our mothers and grandmothers, married women became significantly more empowered with respect to these fundamental decisions over the course of the 19th century. Although old habits die hard, and therefore men’s discretionary decision-making power within marriage likely continued as a cultural norm among some communities, nearly all married women in the United States had the legal right to own separate property and keep earnings acquired during marriage by 1920.

Prior to the birth of American industry, most women in the United States would have spent their lives performing some type of domestic labor in a rural farming community. Usually, the women worked on land owned by her husband, father, or other male relative, with any proceeds beyond what the family required for survival accruing to that owner. Textile mills, the first large-scale American factories, offered young women an alternative unlike any they’d seen before.

In the early textile mills, women were invited to apply the skills they had developed weaving cotton into cloth at home to the large-scale water or steam-powered industrial looms recently constructed in Waltham, Lowell, and other cities across the Northeastern U.S. In exchange, they worked for wages which they had control over spending. They had this control because this new type of work gave them a way to do something not very common at the time: move away from home without getting married.

The young women working in these mills attended lectures, wrote for publications edited by other “mill girls,” opened their own bank accounts, made large purchases like furniture and pianos, and lived in residences acquired in their own names. What freedom compared to life on the farm!

As the American economy continued to grow over the course of the 19th century, opportunities for women to work outside the home continued to expand. The expansion in the range of external options opened new frontiers to women across the country, both in terms of the practical decisions they were able to make and the ideas they were able to encounter. This expanding range of experience proved fertile ground for expansions in women’s rights that would continue to take place through the 20th century.

Susan B. Anthony, a pioneering activist for many women’s rights causes, including separate property ownership, access to professional careers, equal pay for equal work, and women’s suffrage, grew up surrounded by the adventurous young women working in the early American mills. 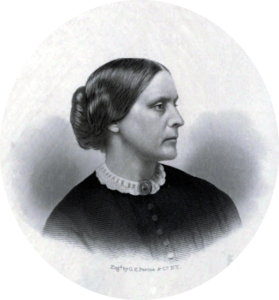 Her father, Daniel Anthony, was the owner of a water-powered textile mill in Pennsylvania that regularly employed female workers, some of whom boarded directly with the Anthony family. Between these experiences and her father’s encouragement of her education, she grew up with a strong conviction in the capability of women that would drive her to work towards expanding the choices available to women in other domains.

So, if you believe–like Emma Watson and I–that choice is important, take a moment to join me in recognizing how important economic opportunity is for all people to be able to make the most important decisions we face as human beings: who we want to be, and how we want to spend our days.