Cervantes was a capitalist? An Austrian? A free-market Randian? A libertarian? An English liberal? A precursor.

Economists from the Austrian School have long argued that the free-market mindset, which reached its pinnacle during the classical liberal period of the 18th and 19th centuries, traces its own origins back to the early modern period, especially the ideas of the neo-scholastic thinkers of 16th and 17th century Spain known as the School of Salamanca.

Miguel de Cervantes (1547-1616), author of the first modern novel, Don Quijote de la Mancha (part one, 1605; part two, 1615), was familiar with the School of Salamanca. As evidence, here are five major ideas at the core of free-market thinking which are also at the core of Don Quijote:

Salamancan and Austrian economists embrace the notion that free and voluntary exchange implies that even two wrongs can make a right. If both of us leave happy, the “true” value of things we exchange matters less than the fact that we exchange them. Tastes, wants, and needs are subjective. Indeed, such differences are precisely why we produce stuff and trade it. Without them we would all be poor, starving brutes.

Examples of subjective value theory abound in Cervantes. For example, in Don Quijote Part 1 Chapter 21, Don Quijote, the eccentric hidalgo (gentleman) asks Sancho, “Do you not see that knight coming toward us, mounted on a dappled gray and wearing on his head a helmet of gold?” The squire is unconvinced: “What I see and can make out ... is just a man riding on a donkey that’s gray like mine, and wearing something shiny on his head.”

The Time Value of Money

If we laugh at Don Quijote's money calculations, we endorse the official policy against interest.Cervantes’s critique of usury laws appears in Don Quijote Part 1 Chapter 4’s dialogue between the hero and Juan Haldudo regarding the back pay the peasant owes a shepherd. Don Quijote calculates that “nine months, at seven reales a month” comes to “73 reales,” which includes an interest of 10 reales. It’s a game of perspectives. If we laugh at Don Quijote, we endorse the official policy against interest; if we accept his calculation, we think like rational market participants.

Karl Marx and Friedrich Engels credited Thomas Hobbes as an originator of their materialist assessment of how the world works. They liked Hobbes’s critique of metaphysical thinking but also his understanding of labor as a commodity subject to the law of supply and demand. A fundamental aspect of the transition from feudalism to bourgeois capitalism involved an awareness that we should compensate people for their property or services.

Hobbes was a serious reader of Don Quijote. Throughout the book, squire and hidalgo negotiate Sancho’s salary. In Part 1 Chapter 20, Sancho presses his master: “I would like to know ... just how much a squire made from a knight-errant in those days, and if they were paid on a monthly basis or daily, like bricklayers.” When Sancho threatens to go on strike in Part 2 Chapter 7, Sansón Carrasco, also known as “perpetual diversion and delight of the courtyards of the schools of Salamanca,” offers his services. Don Quijote perceives a market: “Did I not tell you, Sancho, that I would have plenty of squires from whom to choose?”

John Maynard Keynes observed that only one man in a million perceives the destructive effects of inflation. Hoping likewise, the Habsburg kings of early 17th-century Spain undertook the first modern industrialized production of fiat money to finance their wars, corruption, and extravagance. The results correlate well with the fall of the Spanish Empire marked by the Treaty of Westphalia in 1648 (see figure below). Artificially induced inflation was criticized by members of the School of Salamanca, especially Mariana. Philip III burned Mariana’s books and the Inquisition charged him with lèse-majesté – insulting the monarch, which was treason. 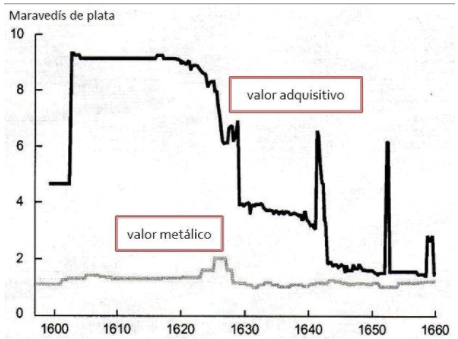 Purchasing power of the billon cuarto coin reverting to the market value of copper, 1597-1659. The maravedí was one of the era’s units of account. Source: Federal Reserve Bank of Chicago.

In Don Quijote Part 1 Chapter 1, the first metaphor in this greatest work of fiction involves a comparison between Rocinante’s hooves and the decayed purchasing power of the era’s quarter coins. Later, in Part 2 Chapter 17, Cervantes has his hero attack what is first described as the king’s money cart. It’s really a cart carrying the King’s lions, which refuse to fight with Don Quijote. But when he uses gold coins to tip the driver and the lion tamer, bribing them to say he vanquished the beasts, it’s symbolic: gold is a store of value against Philip III’s money. The narrator reports that the lion tamer “promised to relate that valiant deed to the King himself when he arrived at court.”

Montesquieu’s notion of “doux-commerce,” a vision of the positive effects of trade, anticipated Adam Smith, James Madison, David Ricardo, Norbert Elias, Steven Pinker, and Niall Ferguson. Anticipating Montesquieu was Mariana, who said, “There’s nothing more excellent in human life than that good faith by which commercial relations are established and society among men is constituted.”

Cervantes was a capitalist? An Austrian? A free-market Randian? A libertarian? An English liberal? A precursor.Don Quijote also concerns this lesson. The protagonist’s madness dissipates as he comes to terms with bourgeois virtues. In Part 1 Chapter 1, he is mismanaging his domestic economy such that not even Aristotle could help him. Just one chapter later, he learns that, unlike chivalric novels, the real world requires payment for goods and services. Fittingly, the innkeeper knights him by pretending to read Latin from an accounting ledger. By Part 1 Chapter 7, our hero grasps that he must finance his adventures: “Hawking one thing and pawning another, all for less than he should have, he came up with a reasonable amount.” Don Quijote is perhaps most bourgeois in Part 1 Chapter 44, where he quietly resolves, without his usual recourse to violence, a payment dispute between the innkeeper and two guests.

The greatest irony involving commerce in Don Quijote is that the marketplace rescues the novel from its own violence against itself. In Part 1 Chapter 9, the narrator explains how he acquired the continuation of the text that ended in the middle of the knight’s battle with the Basque in Part 1 Chapter 8. Asymmetrical information about bundles of paper the narrator finds in Toledo’s marketplace results in their purchase and then the employment of a local Morisco to translate them. Think about this: we couldn’t read the novel past Part 1 Chapter 8 were it not for the miracle of a multiethnic marketplace for goods and services.

Cervantes was a capitalist? An Austrian? A free-market Randian? A libertarian? An English liberal? I hedge by saying he was a precursor.

Nevertheless, when it comes to thinking about economics, there’s a tangible intellectual feedback mechanism amplifying the influence of the first modern novel: Salamancan thoughts on political economy influenced Cervantes; later, proto and classical liberals who also read Salamancans often validated their ideas while reading Don Quijote. John Locke, Thomas Jefferson, and Frédéric Bastiat were also intense fans. But that is another story.