The Effects of Adding Light Rail Are Counterintuitive

Growth in traffic has outpaced growth in population ever since the automobile went into mass production. This puts great demands on our transportation infrastructure. Trying to keep up with growing traffic by building more roadway capacity is a daunting task, particularly in urban regions. There are limits to how many lanes of roadway can be crammed into cities. The results are increased traffic congestion and potentially higher levels of air pollution in urban regions.

Advocates of government subsidies for public transit assert that this should help mitigate urban traffic congestion by replacing many automobile trips with a smaller number of high-occupancy-vehicle trips. In terms of carrying capacity, a bus can serve 15 times as many person-miles per vehicle-mile as a typical automobile. A light-rail train has a carrying capacity about 100 times larger. The prospect of reducing urban traffic congestion by luring would-be automobile drivers onto
public transit is thus tantalizing.

For a long time the assumption has been that offering more public transit service options would reduce traffic congestion. But despite the more than $300 billion in taxpayer money spent to expand the quantity and quality of public transit over the last four decades, its share of travel has declined. While the number of transit passenger-miles has risen slightly over this period, its share of urban travel has decreased (table 1).

In the last two decades, more and more cities have turned to light rail as a prospective savior in the battle against urban traffic congestion. A light-rail train in a three-car configuration can carry about six-to-seven times as many passengers as a standard bus. Light-rail tracks can also be built at-grade in city streets. This is considerably less costly than either an elevated or subway alignment. The high capacity compared to a bus and low cost compared to a subway or elevated track has great appeal to urban planners. 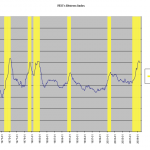 For light rail to reduce traffic congestion, though, the number of persons it diverts from driving must exceed the drawbacks of in-street alignment. When light-rail tracks are built in the street, they occupy space that could have been used by motor vehicles. The loss of two lanes of roadway for motor-vehicle travel (three where stations are located) squeezes the remaining traffic into a narrower facility. In addition, light-rail trains are typically granted the authority to preempt traffic signals. This further impedes the flow of motor vehicles.

The question of which effect is larger—the traffic-reduction impact of diverting drivers from their cars or the traffic-impeding impact of locating light-rail lines in city streets—has been addressed in a report by Valley Metro in Arizona.1 Among other things, the report attempts to project the traffic and air quality in 2020 with and without a 20-mile minimum-operating segment of light rail.

Traffic congestion results when too many vehicles try to use the same roadway at the same time. Vehicles impede each other and slow down the movement of traffic. If enough of those who would otherwise drive could be induced to switch to public transit, the number of vehicles trying to use the roadway would be decreased. This could reduce traffic congestion if the number of diverted automobile trips is larger than any negative consequence caused by public-transit vehicles’ larger size and slower speeds.

The prospect of carrying up to 500 persons at once in a three-car light-rail train is the transit bureaucrats’ plan for reducing automobile trips. Of course, not all 500 light-rail passengers on a given train are diverted from driving an automobile. Some will be diverted bus riders. Others will be taking newly generated trips. So the gain in reduced automobile trips is not as large as the total passenger ridership. Nevertheless, adding light rail is bound to reduce the number of trips made in privately owned automobiles.

As noted, however, adding light rail in an in-street alignment will unavoidably reduce the carrying capacity of the roadway. Typically, two lanes that previously would have been accessible to motor vehicles are taken up by light-rail tracks. Unlike the temporary use of the roadway represented by bus transit (once a bus passes, the lanes are again available to other motor vehicles), light rail often permanently removes access to these lanes. Motor vehicles may be permitted to drive over light rail tracks only at a limited number of designated crossings.

The question is whether the reduced capacity is more than offset by the reduced number of automobile trips or whether the reverse is the case. In an effort to answer this question, the Phoenix region’s urban planning agency, the Maricopa Association of Governments (MAG), ran its “Travel Demand Model” comparing the traffic impacts for conditions without light rail (“no build” option) and with 20 miles of newly added light rail (“build” option) for the year 2020. The results are in table 2. 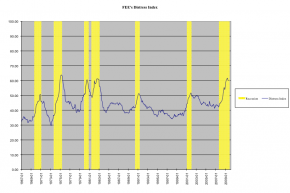 The most outstanding feature of the data is the extraordinarily small difference between the “build” and “no build” alternatives. With one exception, all the impacts are in fractions of 1 percent. The exception is an impact slightly higher than 1 percent. It is clear that adding light rail will not be a significant factor in addressing traffic congestion in the region.

The reduction of VMT is normally expected to reduce delays for the remaining motor vehicles. However, since the roadway capacity is reduced by two lanes, the smaller VMT might be offset. The MAG model’s projected vehicle-hours of travel (VHT) indicate that the loss of capacity is a larger factor than the diversion of drivers from their cars. For the region, the addition of light rail is expected to increase VHT by 0.45 percent. For the corridor served by light rail, VHT are expected to increase by 1.23 percent. So even though fewer miles would be traveled, those trips would take longer if light rail is added to the traffic mix.

The effects are small, but the notion that building a light-rail track in the street will reduce future traffic congestion is confounded by these data.

Although it may not be widely known, urban air quality has been improving over the last few decades despite a dramatic increase in VMT. Taking carbon monoxide as an example, in Phoenix, violations of the Environmental Protection Agency standards used to be common everyday events. Now violations are rare (figure 1.) 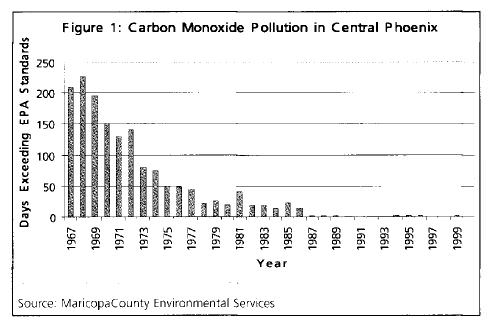 These gains were attained at a time when public transit never carried as much as 1 percent of the person-miles of travel in the region. Consequently, the bulk of the credit for any improvements in air quality must go to advances in automobiles and the fuels they use. Compared to automobiles built in the 1960s, cars today emit 97 percent less carbon monoxide.2 With fleet turnover and existing employed technology, urban air quality should continue to improve despite an expected increase in vehicle-miles of travel. This, in fact, is what is projected in the Valley Metro environmental impact statement. According to that statement, regardless of whether light rail is built, future pollution levels are expected to decline. In Phoenix, air pollution is measured at a number of so-called “hot spots.” For the “build” option, pollution is expected to be lower at three sites and higher at eight sites than under the “no build” option. Overall, carbon-monoxide pollution is expected to be slightly higher under the “build” option.

Expectations for higher pollution as a result of adding light rail are confirmed by the statement’s acknowledgment that carbon-monoxide levels will increase, but not by enough to trigger any violations of EPA standards.3 This conclusion is consistent with the data showing projected increases in VHT if light rail is built.

Inasmuch as light-rail transit is often promoted as a means of improving air quality, the indication that it will actually increase pollution may strike many as counterintuitive. After all, aren’t we luring some people out of their cars? Don’t fewer cars mean less pollution? So far as it goes, the answer is yes. However, by placing the train tracks in the street, we reduce roadway capacity. The reduction in capacity more than offsets the reduction in numbers of vehicles using the roadway. The remaining vehicles take longer to travel through the narrower roadway. This leads to more fuel consumed and higher pollution.

Again, the effects are small, but the notion that building a light-rail track in the street will reduce air pollution, again, is confounded by these data.

Concerns about the growth of motor-vehicle traffic and its impacts on air quality are warranted. We can’t expect to keep adding vehicles to an existing road network without severe reductions in travel speeds. Solutions to the demand for more mobility in the face of this growing crush of traffic are sorely needed.

Solutions, though, must be sensible options that do more good than harm. Given the data for the Phoenix case study, it would appear that one frequently suggested solution—adding light rail—is counterproductive. At best, the likely impacts would be minimal, leaving the problem of traffic congestion virtually untouched. Worse, though, is the prospect that adding in-street light rail will actually make traffic more congested than it would otherwise be.

Granted, Phoenix is only one city. Results might differ in other cities. However, given the relatively poor drawing power of public transit combined with the unavoidable loss of roadway capacity from in-street alignments, it seems probable that similar outcomes would be common in other cities.

The billions “invested” in money-losing light-rail systems have not made a significant contribution toward reducing traffic congestion or air pollution. Tax dollars have been wasted. We need more promising options—like opening markets to independent bus, jitney, and taxi operators.

John Semmens is a research fellow at the Independent Institute and research project manager in the Arizona Department of Transportation Research Center.