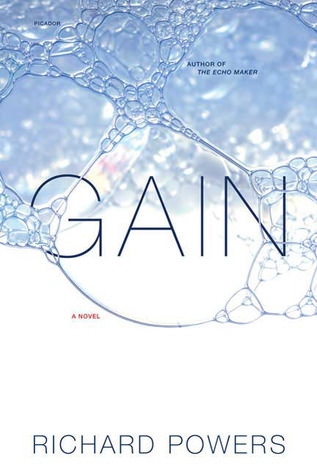 Richard Powers. Gain. Picador, 1998. 355 pages.
Gain is a sprawling and engrossing novel with two main characters: a company and a woman. The company, Jephthah Clare & Sons of Boston, begins as a family shipping enterprise, becomes a small soap and candle manufacturer, and by the end of the novel has grown into a massive international corporation. The woman, Laura Bodey, lives in Lacewood, where Clare has its home offices, and as the novel opens she is just being diagnosed with ovarian cancer.
Powers traces the two stories in parallel, detailing the rise of Clare & Sons and the progress of Laura’s illness in alternating chapters. The tie between the two stories is the possibility—never settled and always questioned by Laura—that her cancer could have been caused by the chemicals in Clare & Sons’s products and production processes. As Laura notes, however, finding the medical cause of her cancer or placing blame for it in court “is not going to tell me what I need to know,” and the course of her illness and treatment is only half of the story Powers is telling.
When Gain was first published, the New York Times observed,
[I]t's clear what Powers is getting at—the history of a company like Clare & Sons may add up to a classic American success story, but among the casualties of that supposed success are the health and happiness of some of its customers and neighbors. The pointed association of business growth with tumor growth, of a corporation's robust health with a woman's agonizing infirmity, is deliberate: for Powers, there is a direct link between the rise of corporations and the decline of the individual.
While Powers could have easily fallen into this trap of making Gain into a Lifetime movie tear-jerker (Ovarian cancer! Mother of two poisoned by chemicals! Evil corporations! Class action suits!) he finds the story of Clare & Sons too complicated and interesting to treat so stereotypically.
Instead, the reader is treated to a fully imagined fictional history of Clare & Sons, supported by painstakingly created advertisements and corporate ephemera. So fully imagined is the history of the company, in fact, that it seems more of a character in the novel than does Laura herself. The lively details of the company’s history and the power of its representation argue, I think, against assuming that Powers just wants us to think that Clare & Sons is a malevolent corporate entity and Laura a hapless victim.
Leaving aside questions of praise and blame, however, it is well worth noting that readers who are looking for compelling and complex representations of business and literature will not be disappointed by Gain. Powers conveys the wonders of the market and the miracle of gains from trade in maxims like “profit equals uncertainty times distance” and in passages like this one:
The world had to be circumnavigated before the humblest washerwoman could sip from her ragged cup. The mystery of it all sometimes visited Jephthah at night. . . . He, the Oregon trapper, the Chinese hong: everyone prospered. Each of them thought he’d gotten the better end of the deal. Now, how could that be? Where had the profit come from?
Readers who are familiar with Adam Smith’s Wealth of Nations or Addison and Steele’s Spectator will recognize the genuinely eighteenth-century ring of such moments.
Equally, the debate among the owners of Clare & Sons about the idea of incorporating will prove interesting to anyone who recalls the dust-up over Mitt Romney’s comment that corporations are people. Powers writes:
If the Fifth and Fourteenth Amendments combined to extend due process to all individuals, and if the incorporated business had become a single person under the law, then the Clare Soap and Chemical company now enjoyed all the legal protections afforded any individual by the spirit of the Constitution. And for the actions of that protected person, for its debts and indiscretions, no single shareholder could be held liable.
Wryly citing Bierce’s Devil’s Dictionary that a corporation is “an ingenious device for obtaining individual profit without individual responsibility,” Powers encapsulates in a few elegant pages the running debate over the nature of the corporation.
For me, Powers’s novel is consumed with questions about growth—the growth that is killing Laura and the growth that creates Clare & Sons. Does growth kill us or cure us? Can a company get too big? Are corporations our greatest threat or our greatest hope?
Gain does not give us answers. It raises questions. But it is worth noting that by the end of the novel, Laura’s video-game-addicted son Tim has grown up to become a computer scientist who works on protein folding. He creates a chunk of code that “might create molecules to do anything . . . and promised to make anything the damaged cell called out for.” With a cure for cancer in their hands, Tim’s team is ready to go into production. “And softly, Tim suggested that it might be time for the little group of them to incorporate.”