Cash for Clunkers Was a Loser

President Obama’s Cash for Clunkers program, inspired by the Consumer Assistance to Recycle and Save Act, ended August 25, 2009. As I drove through a major shopping area that day, I passed a large and highly successful Toyota dealer. Just past the sparkling showroom and sparsely populated lot of new cars, “clunkers” sat in a securely fenced half-acre field. There among the older Chryslers, Buicks, and Chevys were stout Ford F-150 pickups, Jeep Wagoneers, and a few other almost-indestructible vehicles. Along with these, some still-shiny two- or three-year-old gas-sippers stood in the ranks of the condemned, awaiting the injection that would freeze their engines and reduce the entire machine to scrap.

“Nudged” by federal policy, the previous owners accepted a handsome payment from the rest of us for ridding the nation of older, more heavily carbon-emitting vehicles and replacing them with shiny new machines that required a lot of energy to produce but would, on average, yield lower carbon exhaust and greater fuel efficiency. The clunker statute gave consumers $3,500 vouchers if they purchased vehicles that yielded a four- to nine-miles-per-gallon (MPG) improvement in fuel economy, and $4,500 if the yield was ten or more MPG.

In all, according to Bloomberg, some $2.88 billion in tax money helped buy some 700,000 vehicles made up of the popular Ford Focus, Toyota Corolla, Camry, and Prius, along with some Hummers and Ford F-150 and F-250 trucks. These and a wide variety of other cars and trucks moved quickly from dealer lots to the homes of the blessed. In fact, the speed of the transactions was more than government could handle. The program was wildly popular. 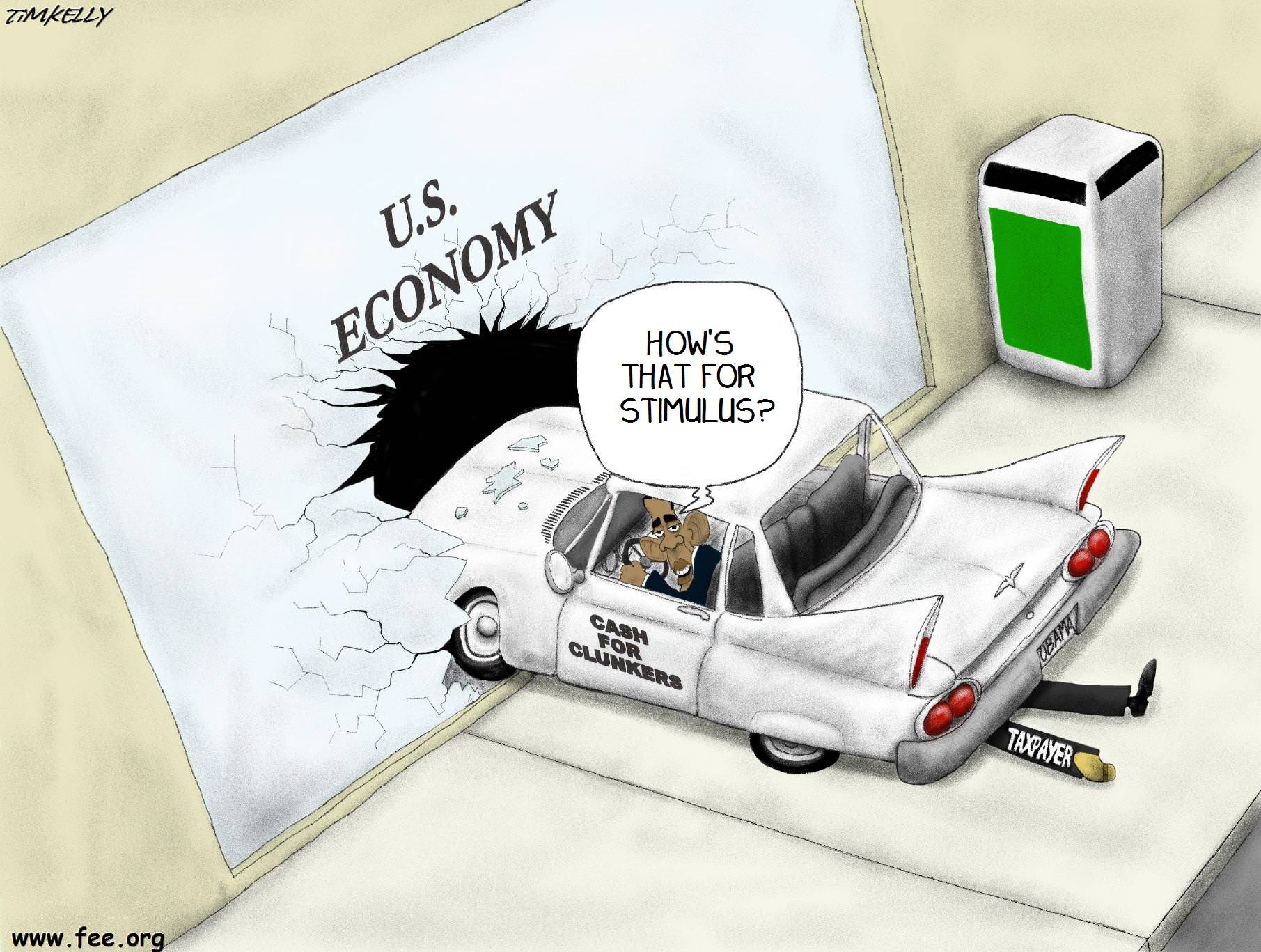 Taken together the trade-ins had an average fuel economy of 15.8 MPG, while the replacements averaged 24.9 MPG. And according to Ford Motor Company, this kind of fuel-economy improvement translates to a reduction of five to ten million barrels of oil consumed over the next five years. (The nation currently consumes nine million barrels a day.) This will be oil that some other people can enjoy.

President Obama cheerfully termed the program “successful beyond anybody’s imagination.” Secretary of Transportation Ray LaHood, who administered the program, said the effort was “a lifeline to the automobile industry, jump starting a major sector of the economy and putting people back to work.” LaHood quickly added that while all this happened, “[W]e’ve been able to take old, polluting cars off the road and help consumers purchase fuel-efficient vehicles.” Economist John Lott surmised that “Only in Washington could a program that is spending money 13 times faster than was planned be labeled a ‘success.’”

Obama’s Council of Economic Advisers (CEA) predicted the economy would be spurred as the auto industry geared up to meet inspired demand.

The program was predicted to raise third-quarter GDP 0.3–0.4 of a percentage point and lift year-end employment by 42,000. August auto sales did indeed reach to the sky, but September sales plunged back into the basement again. The program stole sales from the future; it did not fertilize future sales.

Considering final costs, there’s serious doubt that the program was successful even in the short term. The doubt arises for at least three reasons. First, the program got political support primarily for its much-touted environmental benefits. Carbon emissions would be reduced—but at about ten times the cost of alternate ways of removing carbon. Second, there is Bastiat’s parable of the broken window to consider. And third, there is a serious matter of eroding social norms for conserving wealth. A crushed clunker with a frozen engine is lost capital.

Let’s consider each of these points.

University of California-Berkeley economist Christopher Knittel developed a rigorous assessment of the implied cost of carbon emissions under the clunker program (“The Implied Cost of Carbon Dioxide Under the Cash for Clunkers Program,” www.tinyurl.com/mrmtuy). Knittel made plausible assumptions about the average life remaining in vehicles removed from the road, the average fuel economy associated with those vehicles, and the resulting levels of carbon emission that would have survived in the absence of clunkers. Eventually, of course, the clunkers would have died a natural but less dramatic death. Knittel then estimated the carbon reduction gained by replacing the large fleet of clunkers with a new fuel-efficient fleet. When he ran the numbers, Knittel found the cost per ton of carbon reduced could reach $500 under a set of normal values for critical variables. That fell to $237 per ton under best-case conditions. And what does this tell us? The much celebrated Waxman-Markey cap-and-trade carbon-emission control legislation estimates it costs $28 to reduce a ton of carbon across U.S. industries. Yes, we are getting carbon-emission reductions by way of clunker reduction, but we are paying a pretty penny for it.

Frédéric Bastiat’s brilliant parable of the broken window reminds us that a street hoodlum throwing a brick through a window generates a series of job-generating transactions that might raise GDP by a trivial amount, if it could be measured. Indeed, the idea seems so compelling that people today often speak of the silver lining found in the clouds that create hurricanes. Think of the roofers that become employed.

But Bastiat’s key lesson is that a window has been destroyed—and it had value. Before touting the total benefits of the program we must take account of the destroyed vehicles and engines that represented part of the wealth of the nation. As Tony Liller, vice president for Goodwill, put it: “They’re crushing these cars, and they’re perfectly good. These are cars the poor need to buy.”

Finally, over the eons, human communities have contrived all kinds of devices to transmit critical survival skills and compatible behavioral norms. One of these has to do with conservation of wealth. “Waste not, want not,” we are told. “A penny saved is a penny earned,” we are reminded. Using politics to pay people to destroy valuable vehicles, or to hold crops off the market, or to produce ethanol that may use more energy in production than it adds when burned, teaches a lesson of anti-matter and wealth destruction. Considering all this, Cash for Clunkers sounds like a sorry idea that should not be the model for future policy.

Even though a sorry idea, the Obama administration will soon go forward with a cash for old refrigerators program. Unlike the clunkers program, the appliance plan will not require destruction of the old refrigerators and other items involved. The transaction costs are just too high. Nevertheless, let’s stop Cash for Refrigerators before the idea spreads further.