By the Numbers: How Dangerous Is It to Be a Cop?

Defenders of police militarization, such as that on display in Ferguson, Missouri, often claim that it’s necessary to provide military gear to cops, given how dangerous law enforcement has become.

Indeed, in the name of the War on Terror and the War on Drugs, the federal government has provided thousands of pieces of military-grade body armor, mine-resistant armored personnel carriers, assault rifles, grenade launchers, helicopters, and night-vision goggles to local police and sheriffs. Almost every county in America has received equipment from these programs.

But has policing really become so dangerous that we need to arm peace officers like an invading army? The answer is no. It's never been safer to be a cop.

To start with, few police officers die in the line of duty. Since 1900, only 18,781 police officers have died from any work-related injury. That's an average of 164 a year. In absolute terms, officer fatalities peaked in 1930 (during alcohol prohibition) at 297, spiking again in the 1970s before steadily declining since.

If you look at police fatalities adjusted for the US population, the decline is even starker. 2013 was the safest year for American policing since 1875. 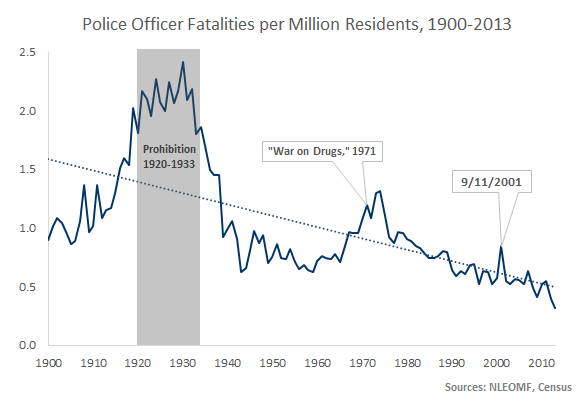 This is not to say that police officers do not have a difficult job. They certainly do. They’re required to have daily contact with drunks, the mentally disabled, and criminal suspects. Arrests can often lead to physical confrontation, assault, and sometimes injury. Police are constantly dragged into families' and neighbors' petty squabbles. It can be a stressful and sometimes thankless task.

But it just isn't unusually deadly or dangerous—and it’s safer today than ever before. The data do not justify the kinds of armor, weapons, insecurity, and paranoia being displayed by police across the country. Short of an outbreak of land-mine-related crimes in America's heartland, there's no reason to deploy mine-resistant vehicles and .50 caliber machine guns to rural sheriffs departments.

Instead of hiding behind gas masks, how about putting cops back on the beat and talking to the community? Instead of M16s and grenade launchers, how about dashboard and body cameras, which have been shown to reduce excessive force and improve officer safety? I bet Mike Brown's family wishes St. Louis County had considered that, rather than being dazzled by shiny new toys from the Pentagon.