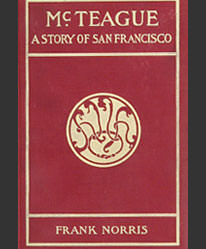 Frank Norris’s 1899 novel McTeague is one of the great neglected masterpieces of American Realist literature. Filled with so much jealousy, obsession, murder, blood, and gold that twentieth-century composer William Bolcom turned it into an opera, McTeague is a useful reminder that “realist literature” does not mean literature that is exactly like real life.

Realism is, instead, literature that focuses on the lives and experiences of ordinary men and women—particularly in an urban context. McTeague’s events and characters are not realistic. They are brutal, often vile, and even melodramatic. But they are intended as an antidote to decades of novels that attended almost exclusively to the doings of the wealthy and conveyed an essentially romantic view of human nature.

Erich Von Stroheim translated McTeague into a 9½-hour silent film in 1924, which was cut into incomprehensibility by the studio.  He titled it Greed. And the dangers of obsessive accumulation are front and center in the novel. As the story begins, McTeague is a dentist in a busy working-class neighborhood in San Francisco. When Trina Sieppe, the girlfriend and cousin of McTeague’s best friend Marcus, comes to McTeague to have a tooth pulled, McTeague and Trina begin to date. Shortly afterward, Trina wins the phenomenal sum of five thousand dollars in the lottery. Marcus, who feels that McTeague stole not only his girlfriend but also his fortune, becomes McTeague’s enemy. Trina and McTeague begin to consider what to do with their windfall.

As they settle into married life, Trina’s “household duties began more and more to absorb her attention, for she was an admirable housekeeper, keeping the little suite in marvelous good order and regulating the schedule of expenditure with an economy that often bordered on positive niggardliness. It was a passion with her to save money . . . she hoarded instinctively, without knowing why.” This perhaps excessive economization rapidly turns into an uncomfortable parsimony. When a house they have long wanted comes onto the market, McTeague and Trina consider buying it, but Trina almost instantly rejects the idea, despite their considerable savings.

“Huh—what do you think, Trina?”

Trina put her chin in the air, tilting back her heavy tiara of swarthy hair.

“I am not so sure yet. Thirty-five dollars and the water extra. I don’t think we can afford it, Mac.”

“It isn’t only that,” said Trina, “but it’ll cost so much to make the change.”

“Ah, you talk’s though we were paupers. Ain’t we got five thousand dollars?”

Trina flushed on the instant, even to the lobes of her tiny pale ears, and put her lips together.

“Now, Mac, you know I don’t want you should talk like that. That money’s never, never to be touched.”

“And you’ve been savun up a good deal, besides,” went on McTeague, exasperated at Trina’s persistent economies.

When McTeague signs a lease for the house anyway, Trina refuses to move and forces McTeague to pay the forfeited first month’s rent himself rather than taking it from her well-guarded savings. This unwillingness to buy into a promising future investment and symbol of their marriage is indicative of an ever-increasing miserliness in Trina. In a slightly later moment that balances precisely between the comic and the chilling, Norris shows us Trina as she

bolted the door with shaking fingers, and emptied a heavy canvas sack upon the middle of her bed. Then she opened her trunk, and taking thence the brass match-box and chamois-skin bag added their contents to the pile. Next she laid herself upon the bed and gathered the gleaming heaps of gold pieces to her with both arms, burying her face in them with long sighs of unspeakable delight. . . .  She lay on her bed, her eyes closed, her face buried in a pile of gold that she encircled with both her arms.

Trina’s near-sexual obsession with her hoard of treasure leads to her descent into the most abject poverty and, finally, to her murder by McTeague.

With Trina dead, McTeague steals her money, flees with Marcus in hot pursuit, and begins his own obsessive quest for gold in the desert mines of Placer County. The two men end the novel in a scene of such stunningly creative brutality that I’m reluctant to spoil it for readers of this review. Suffice it to say that nothing like it has been written before or since—except perhaps for some of the greatest tragic extremities of the Greek drama.

If these were the only events in McTeague, we would have a novel that fits firmly into the traditional genre of literature that moralizes against wealth. But Norris is—perhaps despite himself—sometimes a more interesting thinker than that.

Just as Mac and Trina’s discussion of buying a house suggests that Norris knows there is an appropriate kind of investment that is counterposed to Trina’s inappropriate and obstinate miserliness, a few other moments in McTeague point to some more complicated ways to think about wealth and business.

When McTeague’s friend Marcus becomes set against him and decides to destroy him, the first thing he does is to report McTeague for practicing dentistry without a license. Though he has practiced with some success for twelve years (this is a relative term; Norris’s accounts of turn-of-the-century dentistry are not for the faint-hearted), McTeague is told he must close his practice. In scenes reminiscent of a video from the Institute for Justice, we see McTeague and Trina fretting over how they will continue to earn an income, and McTeague insisting, “I ain’t going to quit for just a piece of paper.” It is not some sort of ahistorical libertarian misreading of Norris to find this vision of the destructiveness of licensure laws infuriating. How else could one be meant to respond to the image of a broken McTeague sitting in his perfectly tidy, completely empty dentist’s office saying, “I got everything fixed and ready . . . an’ nobody comes, an nobody’s ever going to come any more”?

And for those seeking some example of the bourgeois virtues in Norris’s novel, we need look no further than the fragile romance between the dressmaker Miss Baker and the bookbinder Old Grannis. Though the two are so shy that they are scarcely able to exchange a word—and though they conduct their romance primarily by sitting close to the partition that divides their apartments so they can imagine being together—Grannis and Miss Baker eventually, after long lives of hard work and saving, find “a little Elysium of their own creating.”

It would be madness to call McTeague a novel that praises wealth. Stroheim was right to call his filmed version Greed. But it would be irresponsible to ignore the ways in which Norris allows—even in this least subtle of novels—some subtlety into his consideration of the ways in which different people handle their wealth with different levels of responsibility and with different understandings of the meaning of money as a means of exchange, an object of desire, or a source of security.