It's important to have a healthy skeptic's attitude.

The issue of economic inequality is all the rage these days. It encompasses numerous arguments about a wide range of topics. Let us review and rebut several common ones.

Myth 1: Incomes Have Fallen or Stagnated

At first glance, this claim may seem to be supported by a graph like this one, taken from the Federal Reserve FRED data source.

The peak reached in 1999 wasn’t surpassed until 2016. This would seem to indicate significant stagnation of incomes.

The problem is that this is household data, which doesn’t control for the number of people per household. The scientific method has taught us that we need to hold independent variables constant, if possible, to do more accurate and convincing research. So, instead, we should use per capita data, which means one person and always means one person.

What exactly does the inflation-adjusted per capita data on various measures of standard of living say?

Real gross domestic product per capita, real disposable personal income per capita, real personal consumption expenditures per capita, and real total compensation per hour all point to a drastic and sustained improvement in the standard of living over time in the US, business cycles notwithstanding. This government data provides a strong counter-argument to the idea that the typical person in the US hasn’t gained ground in living standards since the 70s or 80s.

Myth 2: The Rich Are Getting Richer Faster than the Poor

The argument falls apart when you consider two things: income mobility and the fact that all households saw increases over time.

This isn't so much an outright fallacy as it has to do with incomplete knowledge and misunderstanding of statistics. The argument falls apart when you consider two things: income mobility and the fact that all households saw increases over time.

The data comes from the Panel Study of Income Dynamics at the University of Michigan. This longitudinal study started in 1968 and has been ongoing ever since.

The reason this data is important is that it follows people over time instead of statistical bins. This is maybe, at first, a subtle point, but it is crucial. Many arguments involving inequality follow statistical bins over time instead of people over time who move through the bins. I might not be as concerned about the bin of the bottom 20 percent between 1970 and 2018 if the people who made up the bottom quintile in 1970 have moved into other higher bins by 2018.

Myth 3: Wages Have Not Tracked Productivity

You may have seen this argument made by the Economic Policy Institute. The first chart (below) shows a disconnect between productivity and pay starting around the year 1973 and continuing into the present day. 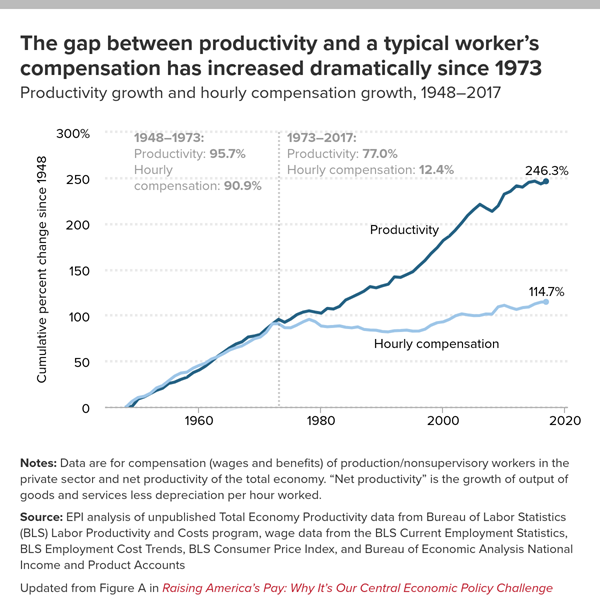 There are two basic problems with this chart.

The first problem is that it only considers wages. When all compensation is considered, which includes wages and non-wage benefits like health insurance, maternity leave, and life insurance among others, total compensation more closely tracks productivity.

Once you take these factors into account, compensation has tracked the increase in productivity to the tune of 77 percent, a far cry from the 7 percent decline that the CPI shows for only wages.

This is akin to wanting to know about the typical university student but only taking a survey at Harvard, a very non-typical school.

The problem with this line of argumentation is that this data is taken from a non-representative sample of CEOs, usually Fortune 100 companies. This is akin to wanting to know about the typical university student but only taking a survey at Harvard, a very non-typical school. Instead, when we take a truly representative survey of CEOs, we find that they make a median of $183,000 a year, about 4-7 times the typical worker.

Myth 5: Racial and Gender Discrimination Are the Primary Causes of Pay Gaps

Statistical analysis of this subject might, at first glance, lead to exactly the conclusion that discrimination is the primary culprit in income disparities between minorities and gender. There are two problems with this.

Second, when we talk about a theory in science, we may have several competing theories trying to explain the same phenomenon. The best theories are often the ones that explain the most-observed phenomenon accurately, that make predictions, and that can be tested and verified repeatedly. The theory discrimination in income disparities suffers from not being able to explain as many observed phenomena. It cannot make accurate predictions, and most importantly, it cannot be measured, tested, and verified. It is thus a theory that needs to be discarded when a superior one exists.

Human capital, according to economists, is the stock of knowledge, habits, and social and personal attributes, including creativity, embodied in the ability to perform labor to produce economic value.

The superior theory is that income is a function of human capital. Human capital, according to economists, is the stock of knowledge, habits, and social and personal attributes, including creativity, embodied in the ability to perform labor to produce economic value. The theory is well established in its framework and has evidence to back it up.

Although we covered only five topics, my purpose was to scratch the surface of inequality arguments and show the common logical breakdowns, fallacies, and statistical misinterpretations that abound in common media about this issue. Inequality arguments suffer from many of the same problems discussed here. My hope is that I have instilled an instinct to have a healthy skeptic’s attitude.

Dustin Carnes holds a BS in Economics along with a BA in Business Administration and writes on matters of statistics and economics in various places on the Internet.