Zimbabwe's Dictator Fell but the Country Is Still In Trouble

Things in the beleaguered African country might yet get worse before they get better.

I was still a university student when I learned that Robert Mugabe, the leader of Zimbabwe since 1980, had started expropriating land from that country’s farmers, leading to the second highest hyperinflation in recorded history and a spectacular economic contraction. Back then, I confidently predicted that the people of Zimbabwe would rise up and overthrow the ZANU-PF dictatorship. That was 17 years ago and, duly chastised, I have refrained from making definite predictions ever since.

At last, the wily dictator, now aged 93, appears to have met his match in the one man who is arguably even more brutal than Mugabe himself. Emmerson Mnangagwa is a killer and a fitting successor to the man he is likely to replace.

For decades, Mugabe dominated Zimbabwe’s politics and bestrode the global stage as Africa’s elder statesman. He accomplished the former by bribing, torturing and murdering his opponents. He achieved the latter via a cultural quirk, which venerates the aged, no matter how despicable.

The increasingly senile nonagenarian, however, made a serious error on November 6, when he sacked his Vice President, Emmerson “Crocodile” Mnangagwa, in order to facilitate the succession of his 52-year old wife, Grace “Gucci” Mugabe. That was Plan B. Mugabe tried to have Mnangagwa poisoned first. Alas, the Crocodile survived an assassination attempt in August and used his carefully cultivated military connections to turn the tables on Mugabe.

Mnangagwa presided over the Gukurahundi pogrom and murder of approximately 20,000 people in Matabeleland.

As things stand, the military, which launched a coup d’état on Tuesday, has Mugabe under arrest in Harare and his wife exiled in Namibia. Most commentators seem to assume that the dictator will now be forced to hand over the reins of power to his erstwhile deputy.

Mnangagwa has been at the centre of power in Zimbabwe since that country’s independence from the United Kingdom in 1980. In addition to the Vice Presidency, he has held a number of ministerial positions, though none as consequential as his stint as Minister of National Security between 1980 and 1988, when he presided over the Gukurahundi pogrom and murder of approximately 20,000 people in Matabeleland.

What sort of a country is the 75-year old génocidaire going to inherit from his predecessor? First, Zimbabwe is a dictatorship, with the opponents of the ruling ZANU-PF regime regularly beaten, jailed and even murdered. Elections, including the one in 1980 that brought Mugabe to power, are either heavily rigged or are conducted in an atmosphere of political violence against the heroic but blundering opposition. The country has no freedom of speech, with the Zimbabwe Broadcasting Corporation serving as the regime’s propaganda tool. That is why the military’s first move was to take over its Harare headquarters.

Hyperinflation and a Tanking GDP

Some four million Zimbabweans, especially the best and brightest, have left the country. They keep the 16 million people still in the country afloat through remittances amounting to over a billion dollars a year.

Speaking of the economy, following Mugabe’s assault on property rights and the rule of law in the early 2000s, the country has experienced hyperinflation that peaked at an annualised rate of 90 sextillion percent in November 2008. That year, output fell to a level last seen in 1979, while GDP per capita fell to where it was in the 1950s. Unemployment rocketed to 90 percent and the state’s functions – with the crucial exceptions of the military and secret police – effectively ceased to operate. 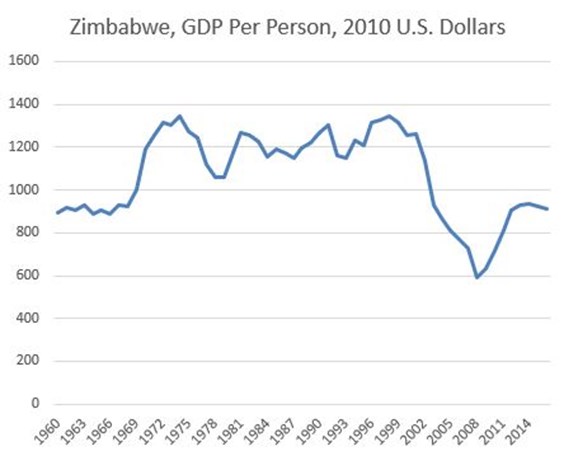 The international community stepped in and organized a power-sharing deal between Mugabe’s ZANU-PF and the opposition Movement for Democratic Change, under which the country was governed between 2009 and 2013.

As befits its bumbling nature, the MDC was given the thankless task of cleaning up the economic mess, as well as trying to improve health and education in Zimbabwe. Meanwhile, ZANU-PF kept control of the powerful ministries, such as the police and the military.

Unsurprisingly, the 2013 general election saw Mugabe regain full control of the country and Mnangagwa, who was instrumental in keeping the dictator in power through the worst of the economic crisis, was soon elevated to the Vice Presidency. 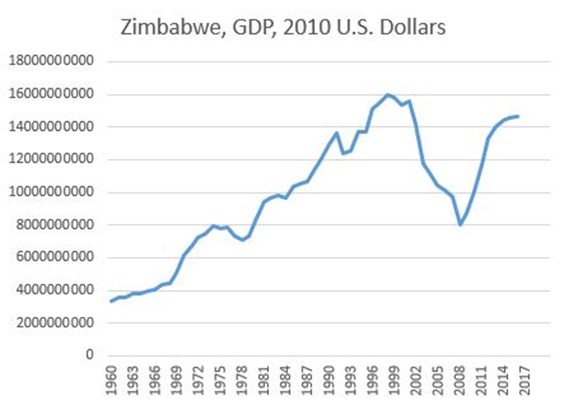 Those of us who have spent years advocating in favor of political and economic freedom in the Southern African country, not to mention millions of Zimbabweans at home and in the diaspora, will rejoice at seeing the back of a corrupt and brutal dictator. But it would be a mistake to be too hopeful. The man who seems poised to take over is just as corrupt and just as brutal as Mugabe. Things in the beleaguered African country might yet get worse before they get better.