Americans are not at the mercy of businesses that don’t share their values. 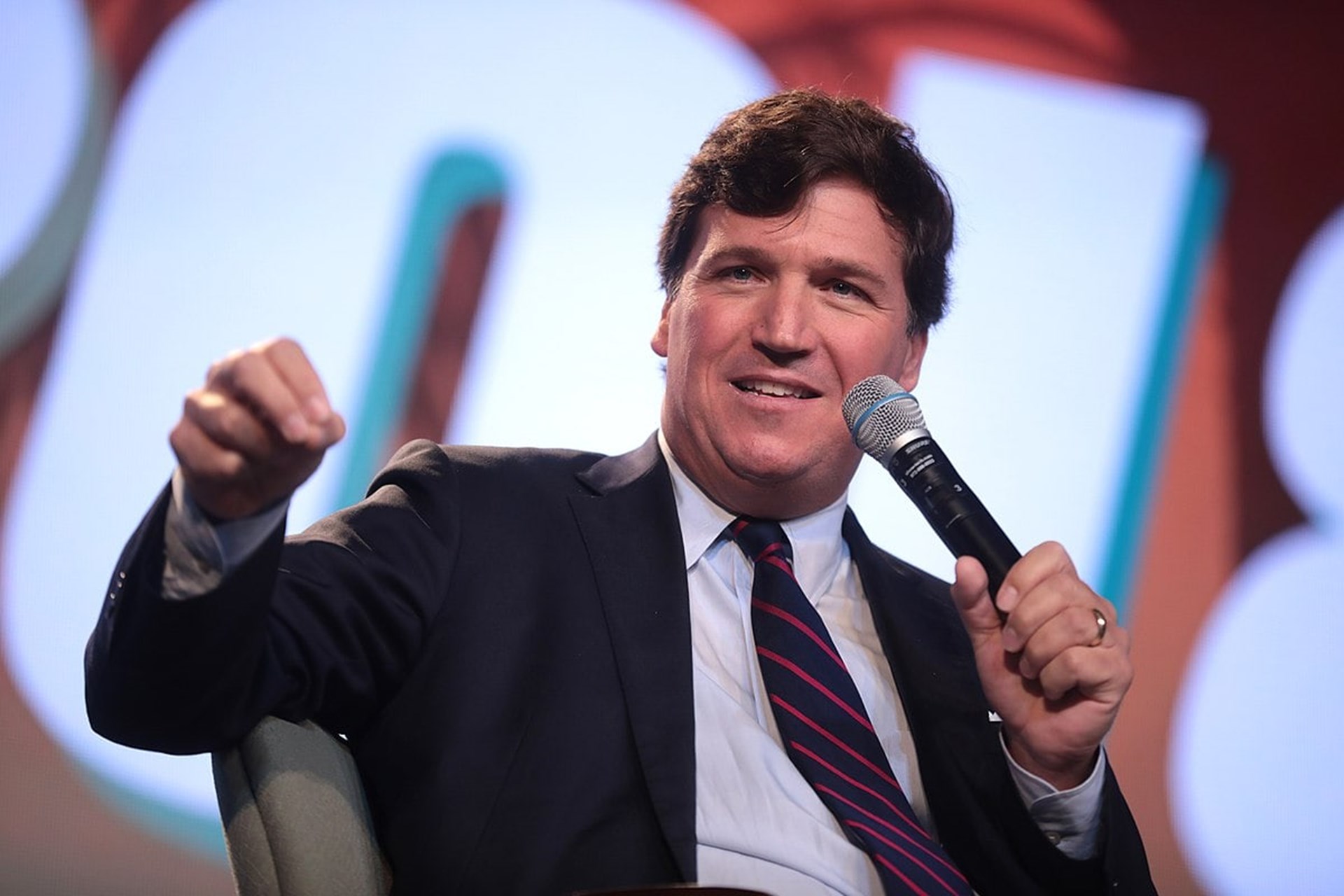 Sundar Pichai, Jack Dorsey, and Mark Zuckerberg have no prisons. They've never run an internment camp or seized anyone's home for failure to mow their lawn. Their body counts are a combined zero. Yet in a recent keynote address at the National Conservatism conference, Tucker Carlson suggested that big corporations—like Google, Twitter, and Facebook—are a greater threat to your freedom than the government.

“The main threat to your ability to live your life as you choose does not come from the government anymore, but it comes from the private sector,” the Fox News host said.

Echoing recent praise for Senator Elizabeth Warren and her brand of economic nationalism, Carlson declared that her book on the two-income trap is “one of the best books on economics he’s ever read.” (Might we recommend a bit of Sowell, Hayek, or Smith?)

Is Carlson’s claim defensible? Not by a long shot.

Government Abuse as a Threat to Freedom

The genius of the Constitution is a result of the American Founders' understanding that our freedoms and rights precede government and that an unrestrained government is the biggest threat to those freedoms. The Founders limited the power of the government through an intricate system of enumerated powers, separation of powers, explicit rights, and rights retained by the people to impede the abuse of governmental power.

Limiting the potential for governmental abuse was fundamental to the design of our constitutional order and remains an abiding concern. No such concern existed for “big corporations” because businesses do not wield the power to promulgate civil and criminal laws and exact punishment for violations of them. The state, not business, has a monopoly on compelled coercion.

Government has the legal authority to incarcerate you, allocate your tax dollars how it sees fit, and foreclose on your home if you fail to mow the lawn.

While laws and law enforcement are essential in a free and orderly society, government abuse at all levels has riddled our history (from FDR’s internment camps to Jim Crow laws in the South) and is the stuff of daily headlines.

Government has the legal authority to incarcerate you, allocate your tax dollars how it sees fit, and foreclose on your home if you fail to mow the lawn.

You may recall the Supreme Court case Masterpiece Cakeshop v. Colorado Civil Rights Commission involving Jack Phillips, the owner of Masterpiece Cakeshop. Phillips was asked by a same-sex couple to create a wedding cake for their upcoming ceremony. Jack politely refused. A complaint was filed with the Colorado Civil Rights Commission, which led to a years-long struggle for Jack as he sought to protect his business, his brand, and his reputation. Even though the Supreme Court ultimately sided with Jack, the state of Colorado sought to punish him for exercising his freedom of speech and association.

Where Is the Evidence of Corporations Threatening Freedom?

Much of the nationalist right’s recent lambasting of big business seems focused on social media. A few media personalities like Alex Jones, Louis Farrakhan, Laura Loomer, and Milo Yiannopoulos have been de-platformed for violating terms of service or community standards, but where is the widescale conservative or nationalist purge? Even when users from the right have been suspended “permanently,” social media has reversed course and reinstated their accounts, sometimes within 48 hours. (Ask your attorney if you can appeal a conviction or civil judgment brought by the government within 48 hours.)

The reality is that no person has a constitutional or natural right to a social media account.

The reality is that no person has a constitutional or natural right to a social media account. A user must agree to the terms of service and comply with community standards to enjoy the services offered by these platforms. No user can compel Facebook or Twitter to tolerate what it deems hateful or offensive language any more than they can compel Fox News to give airtime to pro-Antifa screeds.

Where else is big business threatening conservatives’ freedom? Are banks refusing mortgages to conservatives? Are hospitals refusing to treat them? Are auto dealers refusing to sell F150s to boomers because of MAGA memes? Certainly, there are unfortunate stories of well-known conservatives being refused service at local restaurants, but the multi-year investigation into the IRS’s unfair treatment of conservative groups reveals where the greater threat lies.

Carlson’s speech at the conference was titled “Big Business Hates Your Family.” While Carlson has railed against American companies for any number of reasons in recent years, his latest bête noire is Oreo. Nabisco, a parent company of Oreo, was in Carlson’s crosshairs for advertising that suggests kids “choose their pronoun” with their Pride Month “pronoun pack” cookies.

Tucker dismissed the idea that people can start their own competing business if they don’t like a company’s practices. This dismissal of entrepreneurship is puzzling coming from an entrepreneur; Carlson is the co-founder of an online publisher. But there is an even simpler course of action than starting your own cookie company. If you are not happy with Nabisco’s business practices, buy different cookies… or bake your own at home with your family.

It’s not clear what policy Carlson would suggest in response to Oreo, but Carlson’s characterization of big companies as monopolies may give a clue.

Use a Scalpel, Not a Sledgehammer

The big digital monopolies demand that we conform to their worldview and shut us down when we dissent. They have too much power. They are are threat to this country. Congress is doing nothing about it. It's time to complain, while we still can. #Tucker @FoxNews

Decrying social media companies as monopolies suggests that the companies should be broken up under antitrust laws. However, the Federal Trade Commission enforces antitrust laws where there's a showing of anti-competitive practices. It isn’t enough to say that a company is too large or the company’s practices are not pleasing to pundits like Carlson.

Giving users greater control over their own information would be one way to give consumers more power without breaking up the companies.

If companies like Google, Twitter, and Facebook engage in anti-competitive practices, such as price-fixing or exclusionary contracts, they should be forced to comply with applicable law like any other company. But rather than fearmongering that these companies are a greater threat to freedom than the government, we should narrowly tailor a remedy.

For instance, these tech companies’ greatest competitive advantage is that they have collected extensive data over the years. Rather than trying to break up these companies, users could be given the statutory right of data portability, where a person can delete their account and take all of their personal data with them. Giving users greater control over their own information would be one way to give consumers more power without breaking up the companies they enjoy using on a regular basis.

Ultimately, it’s an odd time to rail against American capitalism. Unemployment has dropped to its lowest level since 1969, and worker wages are on the rise. Capitalism, including big business, is a source of economic prosperity for American workers and families.

Rather than weaponizing antitrust prosecutions for political or social purposes, policymakers should eliminate the anti-competitive privileges of crony capitalism. Concerns about data privacy are real but can be addressed with focused remedies rather than the blunt tool of “breaking up big tech.”

Americans are not at the mercy of businesses that don’t share their values.

Americans are not at the mercy of businesses that don’t share their values. Like Tucker Carlson, we are free to start a competing business, or we can simply choose another supplier. By contrast, we can’t “log out” of laws and regulations—even ones we disagree with. Violating federal law or disobeying the instructions of a law enforcement officer can come with severe and sometimes deadly consequences.

Our Founders wisely recognized that our greatest threat isn’t Nabisco or Facebook. With the memory of an overreaching British monarch fresh in their minds, they sought to establish a republic that ensured government—not private business—was properly constrained. We ignore their wisdom at our own peril.

Brooke Medina serves as director of communications for Civitas Institute, a state-based public policy organization dedicated to the ideas of limited government and liberty. She sits on the board of ReCity Network, a non-profit committed to helping social entrepreneurs and community organizations tackle issues related to poverty. Brooke’s writing has been published in outlets such as The Hill, Entrepreneur, Washington Examiner, Daily Signal, FEE, and Intellectual Takeout.