Thirty-some years after martial law, Poland is thriving. But life wasn’t always this good. Travel with us to 1981.

Poland is not much in the public eye these days, but 30 years ago, the Eastern European nation was producing a drumbeat of headlines. Labor turmoil in a Soviet-controlled satellite. A Polish pope elected in Rome. An independent trade union operating legally and winning concessions from the government. The rise to power of General Wojciech Jaruzelski. Then came martial law and the crushing of Solidarity.

Today Poland is a thriving, vigorous free-market democracy. It belongs to NATO, the European Union, and the World Trade Organization. Such a Poland was unimaginable in 1981, the year martial law was declared. The Communist Party’s control seemed unbreakable. It appeared that Poland would return to the status quo that had prevailed since the Communist takeover just after World War II. But what was the status quo back in those days? What was day-to-day life in Poland like that made the population so eager for change?

The general quality of life, as in the rest of the Soviet sphere, was bleak. Supply shortages and poor distribution methods made shopping for the basics an agonizing experience even when supplies were at their best. Consumer goods were limited almost exclusively to low-quality Eastern-bloc products. Western goods were nowhere to be found except in special Pewex stores, which operated only with hard currency and were mostly beyond the means of average Poles. 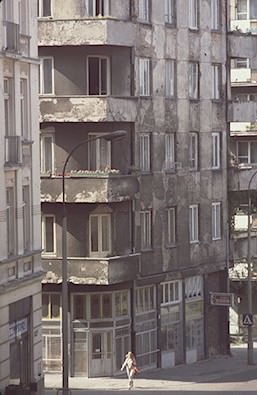 With the advent of martial law, things got progressively worse. Long lines formed when essentials—such as light bulbs, shampoo, tea, toilet paper, coffee, appliances, cheese, paper products, shoes, and underwear—appeared in stores. Shopping became a daily regimen of finding and standing in lines at small, scattered stores. And since most Polish women held jobs, the extra burden of shopping in such conditions was tremendous, leading to high absenteeism from work and significant strains on childcare and homemaking responsibilities. A Pole never left home without a shopping bag in tow, just in case he or she ran into an unexpected chance to purchase something.

The situation was less bleak in Warsaw. The Party could manipulate things to better supply the capital, but in an outlying city like Wroclaw, a major city in southwest Poland, one found a more typical situation for the country as a whole. A trip through Centrum, the city’s largest department store, would have seemed like some bizarre nightmare to American consumers. Very few products were available, yet crowds of people surged through the aisles. Lines of a hundred or more people formed at the few counters where products remained. What had been the fabric section of the store was a sea of empty measuring tables. Six or seven picked-over suits hung in the men’s clothing department among rows of empty racks. The sports department boasted just two items: bicycle tires and ski boots.

Hand-lettered signs throughout the store echoed the sad state of affairs. The men’s shoe department, where hundreds of different pairs had once been displayed, was empty. A sign there read, “149 pairs will be sold today.” Another sign announced, “No rugs will be sold today.” In front of the few vacuum cleaners left in the appliance section was a sign, “Only for Farmers.” The State had tried to entice farmers into producing more food by reserving desirable consumer goods just for them.

People were sometimes required to perform fantastic feats to obtain simple items. When sewing machines were announced for sale at one department store, people flocked in from all over Wroclaw. Initially it took a day and a half of standing in line simply to get on a list of interested buyers. Then for three or four consecutive days, one had to return three times a day for the roll calls verifying the list of names. This task accomplished, everyone was instructed to return in two weeks, when the machines would be delivered—but there was still no guarantee that people on the list would actually get a sewing machine. Who knew how many sewing machines would find their way into the hands of friends of the store manager or Party members?

But of the shopping hardships the Polish buyer had to face, surely the search for food was the most depressing. An inventory of one popular grocery store in Wroclaw with a reputation for being well supplied turned up bread, crackers, two types of spices, pickles, salt, flour, macaroni, sugar, large cans of peas, and mineral water. The produce section displayed potatoes, onions, beets, carrots, garlic, and spoiled lettuce. The dairy section yielded white cheese and eggs. Meat was available to those with the proper ration tickets. This was the entire content of the store. When shipments of jam, yogurt, or pudding mix arrived, they would sell out in under an hour. Sometimes milk could be had in the early morning.

By canvassing smaller shops around the city, one could procure a few more items, and Poles could round out the selection of vegetables via the outdoor market, but the struggle to create an appetizing and varied diet from these few basic foods was discouraging. Fruit was a particular problem; apples were sold year-round and occasionally lemons would appear. Oranges and bananas were imported only during holidays.

Buying gasoline was yet another headache. Party sympathizers were fond of pointing out that people in the United States had to line up to buy gasoline once, too. Yes, once. The countrywide shortages in Poland were a chronic problem, dwarfing America’s ordeal of the 1970s. Typically consumers would have to spend the day in their cars, leave them overnight, then spend the next day waiting in line, just to get a tank of gas. And that was assuming the gas station reopened—that it did not shut down again while waiting for the supply truck to return.

The oppressive daily reality didn’t end there. Housing shortages forced the young to the brink of despair as they faced waits of 10 or more years for cramped apartment space. Middle-aged couples with children were still living with parents as their names crept up the housing lists, while those who opted for Party membership were often quickly housed. Construction was uniformly utilitarian, gray, blockish, and unappealing. Many buildings started to crumble as soon as they went into service. The use of coal for energy cast a dark film over the cities. Public transportation was barely adequate, so buses, trams, and train cars were often full to bursting. The wait to buy a private car could last years and resulted for most in a tiny, underpowered Polish Fiat. Windshield wipers had to be locked inside the car whenever it was not being driven because they were prime targets for thieves. Car parts were hard to come by.

It’s true, however, that Soviet bloc countries enjoyed full employment. Well, “enjoyed” might be a stretch. Full employment produced chronic overstaffing. Many jobs were boring and frustrating. Shopkeepers, restaurant workers, and transportation employees had no incentive to be helpful or even civil to customers; they gained nothing in the bargain. Service was often surly and listless. Professionals battled inadequate supplies and equipment. Professors at Wroclaw’s prestigious technical university scoffed at the idea that they could manage any research in Poland. They spent all their time writing proposals for grants from universities in the West, where sophisticated equipment and materials were available. Bureaucracy gummed up every transaction, every simple request. Travel abroad was extremely restricted, and of course, television, radio, and print media were all limited to Party-controlled providers from Poland or elsewhere within the Soviet sphere.

Martial law imposed even greater restrictions. Passports were universally canceled so that no one could travel abroad. During the first few months of martial law, Poles were not even allowed to travel between cities within Poland without government authorization. Letters arrived torn open, stuffed in plastic bags, and stamped “Censored.” When you dialed a number on the telephone, the first thing you heard before anyone could speak was a recording repeating, “conversation controlled, conversation controlled.” The army took over all broadcasting, so programming on TV went heavily to Russian films about World War II. Soldiers in uniform had replaced the news anchors reading the daily news off teleprompters. And the news was always the same: Solidarity had wrecked the economy; the army was now getting the country back into shape; things were getting better. Of course, everyone knew none of that was true.

Life only began to improve after the Poles had thrown off the shackles of Soviet-style socialism. Once the Berlin Wall fell in 1989, things progressed rapidly in Poland. In December 1989, Poland’s parliament, the Sejm, approved a program to transform the Polish economy from centrally planned to free market. The Communist Workers’ Party dissolved itself in January 1990, and by the end of that year, Lech Walesa became Poland’s first modern-day, freely elected president.

Today life in Poland is on a par with that in Western Europe. Supermarkets and newly built department stores are flooded with goods from all over the world. Cities boast major new building developments. New church construction, forbidden under Communist rule, is booming. Old crumbling facades have been renovated, advertising now breaks up the uniform gray of the past, and transportation problems are largely solved. New superhighways supplement an excellent rail system. In 1996, Poles in Warsaw began bragging that the McDonald’s there had installed a drive-through window.

High-end restaurants, trendy cafes, and workaday lunch counters are everywhere. Where tourists from abroad were once a rare sight, even in a UNESCO World Heritage site like Krakow’s medieval marketplace, now you might find people there speaking English, Spanish, German, French, Russian, Finnish, Hungarian, Czech, Latvian, and Lithuanian, just to name a few. And Poles are, of course, free to travel abroad.

Poles have become huge borrowers, using credit to build new homes and purchase readily available apartments, cars, DVD players, big-screen TVs, and the like, yet default rates are comparatively low for such massive borrowing. Healthy living is a new passion in Poland. In the past, Poles didn’t have the flexibility or the means to explore different lifestyles. Now, heart disease and smoking are down, while exercising and interest in healthy cooking are up.

Poland’s economic and political transformations were complicated and tumultuous, but the Poles persevered through the setbacks, determined to take advantage of their new opportunity. What has emerged is a country that serves as a prime example of the advantages of freedom and democracy over repression and tyranny.

Gary Dudney spent four years in Poland on Fulbright exchanges after earning his Master's degree at the University of Kansas. He has worked for McGraw-Hill since returning to the States with his Polish wife.