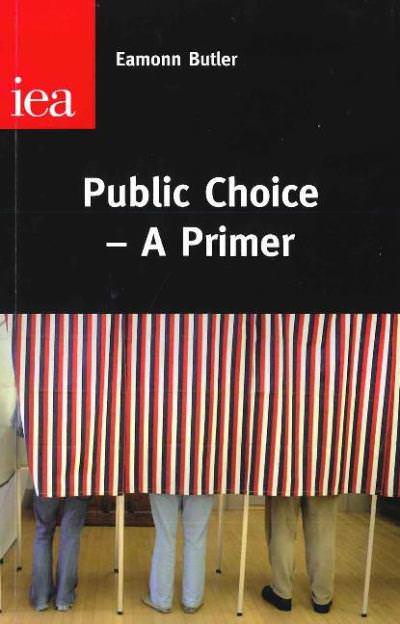 Eamonn Butler has earned his libertarian credentials: He cofounded the Adam Smith Institute, of which he is the director, and served as vice president of the Mont Pelerin Society. But Public Choice—A Primer was not written for a libertarian audience.
Instead, it’s a remarkably approachable and inquisitive overview aimed at the mainstream reader who may know nothing at all about Public Choice. In a little over a hundred pages—including a concise glossary and a useful timeline—Butler manages to summarize the history of Public Choice theory and offer details on its main expositors.
Butler draws upon a long tradition of Public Choice theorists. Starting with Duncan Black's 1942 essays on Count Charles de Borda and Marquis de Condorcet's eighteenth-century contributions, he moves on to the most seminal text of all: James M. Buchanan and Gordon Tullock's 1962 Calculus of Consent. Butler reminds us that Buchanan and Tullock gave us a simple but powerful definition of Public Choice theory: self-interest is the primary driving force behind all human actions. While this theory could include some business people who create jobs, Public Choice theorists like to stress that politicians, bureaucrats, and union leaders are driven by the same human trait. In other words, big government is also driven mostly by self-interest; it is not merely regimented by some ethereal "public interest."
Beyond this straightforward reiteration of the origins of Public Choice theory, Butler aptly shows that the theory is perfectly in keeping with the essence of free-market capitalism. Indeed, it offers a critique of this economic modus operandi in the same way as its godfather, Adam Smith, once suggested it should. As Butler reminds us, Adam Smith warned us as early as 1776 about the special relationships that could occur between government and business. To this end, Public Choice theory emphasizes the pitfalls of logrolling, pork-barrel politics, and crony capitalism. Butler goes to great lengths to describe and explain these unsavory yet necessary political side effects of mingling market forces with political power. He adds a touching anecdote about a time when, as an intern in the folly of youth, he was surprised at the kind of bartering ubiquitous in the United States Congress.
Butler goes into great detail to explain that there are three main schools of Public Choice theory. The first, started by Buchanan and Tullock, is known as the “Virginia School.” It focuses on constitutional theory and political institutions. The “Rochester School,” whose main figurehead is William H. Riker, relies heavily on mathematics and statistics and paved the way for the use of game theory. Finally, “Chicago School” practitioners—best represented by Gary S. Becker and George J. Stigler—look at the economic theory of collective decision-making and political institutions.
Such detail leaves the reader with the opportunity to actually choose a school. Butler is subtle enough to embrace none explicitly, and his impartial summary of different Public Choice theory interpretations gives the more tenacious reader the welcome opportunity to explore more deeply, starting with the Further Reading section at the end of the volume.
Over the course of a short book, Eamonn Butler has managed to capture the attractive aspects of Public Choice theory and hint toward its still-nebulous areas. Like any theory, it has its shortcomings. Yet it is also a powerful tool to contextualize events and to better understand the seemingly nefarious actions of our political leaders and their supplicants. Indeed, Public Choice theory rejects an oversimplified view of the political arena and encourages what some might regard as a cynical outlook on human action. Buchanan himself, after all, described Public Choice theory as “politics without romance.” But it also, particularly with the help of this volume, equips the reader with new lenses through which to see the world.

Victor Stepien is a masters graduate from the University of Provence in France. His work has been published in the popular press and academic journals in Europe, the United States and Australia.