No, Teachers Are Not Underpaid

Salaries lag in some states, but nationally, wages and benefits outpace the private sector.

Recent protests across the country have reinforced the perception that public school teachers are dramatically underpaid. They’re not: the average teacher already enjoys market-level wages plus retirement benefits vastly exceeding those of private-sector workers. Across-the-board salary increases, such as those enacted in Arizona, West Virginia, and Kentucky, are the wrong solution to a non-problem.

Most commentary on teacher pay begins and ends with the observation that public school teachers earn lower salaries than the average college graduate. This is true, but in what other context do we assume that every occupation requiring a college degree should get paid the same? Engineers make about 25 percent more than accountants, but “underpaid” accountants are not demonstrating in the streets. 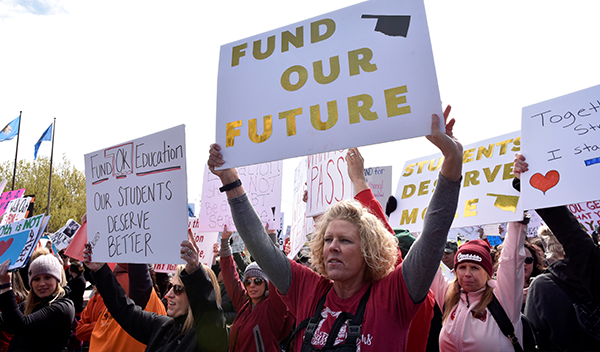 Teachers rally outside the state Capitol on the second day of a teacher walkout to demand higher pay and more funding for education in Oklahoma City, Oklahoma, April 3, 2018. Reuters

Wages are not determined by years of schooling but by the supply and demand for skills. These skills vary by field of study. About half of teachers major in education, among the least-rigorous fields at both the undergraduate and graduate levels. Incoming education majors have lower SAT or GRE scores than candidates in other fields, but—thanks to grade inflation—they enjoy the highest GPAs. Data from the Collegiate Learning Assessment indicate that students majoring in social science, humanities, and STEM fields not only start college with greater skills than education majors but also learn more along the way.

The Bureau of Labor Statistics (BLS) analyzes the skill requirements of different jobs, assigning each a pay grade based on the federal government’s General Schedule (GS). At the lowest skill levels—a GS-6 on the federal scale—teachers earn salaries about 26 percent higher than similar white-collar workers. At GS-11, the highest skill level, teaching pays 17 percent less than other white-collar jobs. This explains how shortages can exist for specialized positions teaching STEM, languages, or students with disabilities, while elementary education postings may receive dozens of applications per job opening.

Contrary to myth, teachers are generally not foregoing higher salaries by staying in the classroom.

The average public school teaching position rated an 8.8 on the federal GS scale. After adjustment to reflect the time that teachers work outside the formal school day, the BLS data show that public school teachers on average receive salaries about 8 percent above similar private-sector jobs.

Contrary to myth, teachers are generally not foregoing higher salaries by staying in the classroom. Data from the Survey of Income and Program Participation show that teachers who change to non-teaching jobs take an average salary cut of about 3 percent. Studies using administrative records in Florida, Missouri, Georgia, and Montana showed similar results; the Georgia study found “strong evidence that very few of those who leave teaching take jobs that pay more than their salary as teachers.”

It's Not Just Wages

It’s true that teacher salaries in several states are lagging. Teachers in Arizona, West Virginia, and Oklahoma have good reason to be dissatisfied: their salaries rank near the bottom nationally, even after controlling for cost of living. Even in these seemingly underpaying states, though, pensions can more than make up the difference.

We forget the value of benefits when considering how teacher pay compares with private-sector work.

As the New York Times recently reported, public-employee retirement and health benefits are bleeding dry state and local budgets. Neither the public nor teachers fully appreciate the costs of these programs. We forget the value of benefits when considering how teacher pay compares with private-sector work. And research suggests that teachers value deferred compensation less than upfront salary.

This opens the possibility of a constructive reform. States could offer newly hired teachers higher pay, coupled with switching those teachers to a generous, well-designed 401(k)-type retirement plan. In Oklahoma, for instance, the state could give new teachers an 11 percent raise—costless to the taxpayer—by providing a 401(k) plan with an employer contribution, which would still be four times greater than private-sector levels.

Research has found that better pay has only a modest impact on teacher quality.

For areas with legitimate teaching shortages—such as in STEM fields or special education—districts could offer targeted salary increases. A strategic approach to filling teacher shortages is particularly important to poorer states such as West Virginia and Oklahoma, where resources are limited.

Across-the-board pay increases, by contrast, are expensive and inefficient. Arizona governor Doug Ducey’s promised 20 percent teacher salary increase will cost $400 million annually before a single new teacher is hired. Such efforts create no incentive for prospective teachers to specialize in areas where shortages exist. And if the salary boost winds up reducing teacher retirements, fewer spots will open up for better-qualified new teachers. Research has found that better pay has only a modest impact on teacher quality.

Teachers enjoy widespread public favor, and their desire for higher pay is understandable. But no nationwide crisis of teacher compensation exists. Most teachers receive market-level salaries and generous retirement benefits. Local hiring problems can and should be addressed without granting windfall benefits to teachers whose compensation is already better than adequate.

Jason Richwine is a public policy analyst in Washington, D.C.