Fight for a More Civilized Bigotry

We don’t need to hold the same opinions in order to be civil to one another.

Over the past few years, the demand for social justice, privilege checking, tolerance and diversity in the west has skyrocketed. The progressive left (as represented in media, Hollywood, corporate business, social activism, academia, and government) has made clear that its primary political concern is fighting bigotry and hate. In America particularly, I would argue that our social and cultural climate has rapidly devolved into a state of warfare. I wish I was exaggerating, but from political clashes such as the ones in Berkeley to mass Facebook unfriending, political animosity seems to be growing.

With more and more people substituting screams for discussion, intolerance of both sides has strengthened.

A large part of that animosity stems from a militant opposition to bigotry. On face value, I don’t see anything wrong with opposing bigotry. Being a millennial, I’m part of the most culturally diverse and socially connected generation in history. But lately, I’ve noticed the tactics used by many in this effort have been increasingly unproductive. In fact, that’s too gracious. They’ve been outright counterproductive.

From the defense of ethnic minorities to LGBT rights, many on the left have created a hostile relationship between social liberalism and the general public. The obsessive rampage of millennials trying to exterminate bigotry has made people more divisive and ideologically isolated than ever. And I think, rather than millennials doubling down on their rampage to smash bigotry, they should instead consider fighting for a more civilized bigotry.

What is Civilized Bigotry

When I think of civilized bigotry, I envision a system or social order that allows for peaceful and productive cooperation between the more bigoted members of society, and the more individualist members of society. Not to say one can’t be both.

The purpose of civilized bigotry is to minimize conflict by maximizing understanding. Too often we promote our moral virtues with the assumption that others will adopt them without resistance. With more and more people substituting discussion for screams of racism, sexism, homophobia, transphobia, islamophobia, etc., the intolerance of both sides has only strengthened.

Encouraging civilized bigotry is a good alternative to reversed despotism.

The strategy for many social justice advocates has long been to silence the bigoted views that they hold in contempt, in an effort to shape a more tolerant society. This has led to certain ideas being met with attempts to get people fired from work, criminal punishment, and even physical assault.

One of the most notable examples involves Richard Spencer, an Alt Right media figure who was questioned about his affiliation with Nazism and subsequently sucker punched by a random protester.

As a black man, I’m not very sympathetic to the ideas of white nationalism. But the public reaction to his assault was irrational, illiberal, and most of all uncivil, articles questioning whether it’s ok to punch political opponents, chants of “make Nazis afraid again” on college campuses. Encouraging civilized bigotry is a good alternative to this reversed despotism. And before you dismiss this proposal in favor of unapologetically bashing bigots, you should know that I used to be one.

You heard me right, I used to be a bigot. Not that long ago, in fact, about 3 years ago I was pretty transphobic. I wouldn’t say I held any feelings of hate or fear towards trans people, I just simply lacked respect for their identity. One day I decided to post some questions I had about transgenderism on social media, looking for a civil discussion to expand my understanding.

Admittedly, some of the questions might have been unintentionally ignorant, but I entered into this venture in good faith. But instead of discussion, I was greeted with hostility and disgust. The people I engaged with abhorred my lack of immediate conformity to their demands for respect, not in terms of general civility because I’m not by nature a jerk, but things like using proper pronouns, acknowledging “cisgender privilege,” etc.

My bigoted positions weren’t going to be swayed by fear of being labeled transphobic.

Now maybe I’m old school, but I believe respect is something that is earned, not demanded. When I contested their demand for my arbitrary acceptance of transgender norms, I was stunned by the response. Instead of continuing to discuss ideas, I was basically expelled from their social circle and branded an intolerant hateful bigot. This baffled me because I didn’t hate them. I had an ignorant understanding of their identity, and because of that I wasn’t able to properly formulate respect for them. But I didn’t hold any ill will towards them. I was a bigot, not a monster.

This dictatorial attitude of “listen and believe” has plagued the market of social justice advocacy for years, aggressive thought policing in an effort to reform one's beliefs, not through persuasion, but through intimidation. My experience was unfortunate because I really wanted to build a bridge between myself and the transgender community, but my bigoted positions weren’t going to be swayed by fear of being labeled transphobic. That method was completely ineffective and if that had been the only tactic used on me, I would likely still be transphobic to this day. Thankfully, that was not the case.

After my disheartening experience with intersectional progressives, I voiced my frustration on social media in what I would describe as a pretty blunt reaction video. And to my surprise, it went viral.

I expected a general response similar to that which I received from the progressives I formerly engaged with, you know, claims of bigotry, transphobia, hate speech and all the hysterical screeching associated. But to my surprise again, the video was instead met with an onslaught of support. Not only from the general public but by hundreds of transgender people. All of which were incredibly supportive and eager to engage with me.

Following that video, I had multiple discussions with members of the trans community. I even made a playlist of some of my favorite video responses from trans people and trans allies. Later, I came into contact with other popular transgender personalities like Blaire White and Theryn Meyer who today I consider personal friends. As my friendship with these two amazing women continued to grow, I realized something amazing. I had grown to respect transgenderism. 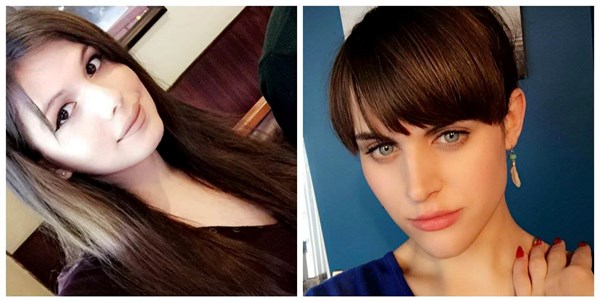 Upon realizing this, I first assumed this respect rose from an increased understanding of transgenderism as a concept, a result of “educating myself.” But, my opinions largely hadn’t changed.

Granted my position on transgenderism was more refined and definitely more informed than it previously had been, but I still had personal contentions with the notion of gender being a social construct. I still struggled to embrace related concepts like non-binary or genderqueer. And I damn sure didn’t check my cishet black male privilege. In fact, according to most progressive standards, I’d still be just as bigoted now as I was prior to this experience. So what was it that made me change?

The real motivating factor that allowed me to find respect for a class of people I previously didn’t have respect for was friendship. It was the compassion and interaction with transgender people that cultivated my respect for their identity. I have no problem referring to my trans friends (or any trans person really) by their preferred pronouns. Not because I feel socially obligated. Not even because I respect their beliefs, but because I respect them as individuals. 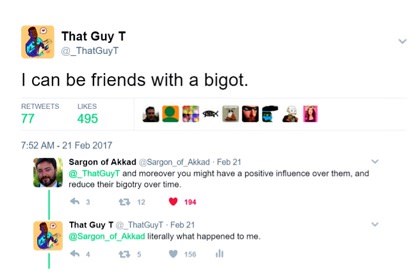 This statement I put out on twitter a few weeks ago wasn’t intended to be bold, but I do hope it resonates with others who may be flirting with the mainstream notion that bigotry is only to be met with vitriol and disassociation. Yes, I can be friends with a bigot. I am in fact friends with bigots. Some of whom are racist, sexist, ableist, homophobic, transphobic, xenophobic, islamophobic. My friendship with bigots does not serve as an endorsement of their views. It’s not meant to encourage intolerance. It’s meant to do the exact opposite in fact. It’s meant to infiltrate their social bubble, provide a positive influence that will hopefully change their attitudes toward particular cultural phenomena, and through that hopefully find a way to cooperate and coexist.

The fight against bigotry has long been centered around ideological transformation, but we shouldn’t have to change minds in order to find peace. We don’t need to hold the same opinions in order to be civil to one another. What’s the point in fighting bigotry if it only leads to more division? What’s the point in preaching tolerance if it’s only given to those who think the same as you?