Even If Marine Le Pen Goes Away, Economic Illiteracy Won't

Most of France — and the rest of the world — are deeply ignorant of economic truths.

When it comes to France and its elections, the attention span seems to go by who's the current president, and what Marine Le Pen is doing. Little wonder that the anglophone media is currently reporting very little about the candidate who lost against Emmanuel Macron in May this year, as Le Pen has been very much preoccupied with internal difficulties rather than addressing Macron's policies.

The National Front in Turmoil

France has this very odd habit of parties actually changing their names. While rebranding of party marketing tactics and messages is something that happens all across the globe, the French change the name of the political group without reforming its actual message. This is something that Le Pen's National Front is currently looking into, as the far-right party has been hit by several crises.

The National Front sees itself in massive turmoil during this reform. The fact that Marine Le Pen lost against Emmanuel Macron in the second round of the presidential election didn't come as a great surprise to the electorate, including its own. However, Le Pen's nationalists clearly underperformed in their attempt to gain a stronger hold in the legislature, as they only gained 8 seats in the National Assembly in Paris, compared to the 60 parliamentarians it was supposed to get according to opinion polls in 2016.

As a result, influential members, including Le Pen's former right hand and party vice chairman, Florian Philippot, left the party in order to create a competing political movement. The National Front sees itself in massive turmoil during this reform, as it is in the effort of capitalizing on the massive increase in voter support in the past elections, and is tearing itself apart in the process. The mix of politicians leaving the movement and Le Pen excluding them from the party has even seen the National Front lose its position as the strongest French party in the European Parliament. Even the planned rebranding of the party faces opposition in the nationalist's ranks. This is why speculations vary: from Le Pen stepping down to the party becoming completely insignificant.

The Far-Right Answers a Popular Demand

Once we look back at the presidential election this year, we find that the far-left and the far-right in France fight very similar battles. In fact, the proposals of these movements are so identical that Le Pen's party campaigned on them when she faced Emmanuel Macron in the second round. Le Monde reported on the campaign leaflet circulated by Le Pen’s National Front, which tried to attract the electorate of far-left candidate Jean-Luc Mélenchon, who got 19.5 percent of the vote in the first round. 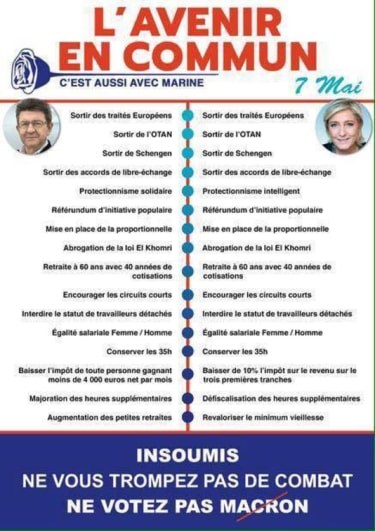 The leaflet, titled “Our future together,” compares Mélenchon’s proposals to those of Marine Le Pen. It trumpets that both candidates want to leave the European Union, NATO (which, in the case, of Le Pen is actually not true), and international trade deals. Additionally, both want to keep the 35-hour working week, install different measures of protectionism (by, for instance, taxing foreign imports), and cut the income tax for low-income earners.

In a remarkable IFOP poll taken just prior to the 2012 presidential election, 53 percent of French people believe that free trade has a negative impact on consumer prices, 69 percent say it aggravates the deficit, and a staggering 81 percent believe it has a negative impact on employment. However, recent numbers confirm this disconcerting trend. In a poll released in March of this year, a majority of people agreed with the notion that free trade is a good thing, but they were surely only led by the positive sounding semantics, because 70 percent preceded to state that France should tax foreign imports if they are in competition with French products, and 58 percent want to ban delocalization of companies. We hopefully won't have to find out how they would intend to enforce this last part.

If free-marketeers are sincere about their attempt to change the political landscape, they need to start at the bottom by educating people. Economic Education Is the Solution

We can write and talk about an uneducated political class who adhere to flawed economics all we like, but it doesn't change the fact that someone voted them in to begin with. Marine Le Pen is the symptom of a mislead public, not its cause. If the far-right would turn out to dissolve, which, even given its current problems, would remain an extraordinary development, then the far-left would take over its remaining political strength.

It doesn't matter which politician gives irrationality a face, but who propagates the irrationality. If free-marketeers are sincere about their attempt to change the political landscape, they need to start at the bottom by educating people about the advantageous nature of free trade and the devastating effects of the welfare state.