Yes, they absolutely did

There’s apparently been some controversy in academia about whether the infamous “No Irish Need Apply” signs and advertisements ever actually existed, or whether they were somehow figments of the collective Irish-American imagination, conjured up to get victim status.

This is, of course, utter nonsense, Phil Magness explains:

For more than a decade, University of Illinois-Chicago Professor Richard Jensen has been peddling a very strange historical thesis with a surprising amount of success in academic journals.

Jensen argues that the “No Irish Need Apply” slogan — the infamous discriminatory display against Irish immigrants to the United States in the 19th century — is largely a myth. He contends that the slogan, referred to as “NINA,” is a case of projected self-victimization that Irish communities enlisted to evoke sympathy or encourage immigrant solidarity, while also suggesting that evidence of NINA’s actual use was exceedingly rare.

There’s a major problem with the Jensen/NINA thesis, though: It’s complete bunk.

And the person who refuted Jensen’s claims is a high school student named Rebecca Fried. As detailed in this article, Fried investigated Jensen’s claims by scanning several online newspaper databases and finding extensive evidence of the nativist NINA slogan in hundreds of classified advertisements, newspaper articles, and even a couple of court cases in the 19th century. ...

Searching for NINA in genealogybank.com and newspapers.com — two subscription newspaper database websites — yielded 808 and 856 hits between the years 1800 and 1900, respectively, with the peak taking place between roughly 1850 and 1880. Most appear to be classified ads seeking labor. A few are Irish community commentaries upon the prevalence of such ads, further refuting Jensen’s additional claims about whether Irish immigrants were historically aware of such discrimination on a large scale. ...

It also became apparent that the practice was also sufficiently established by as early as 1830 that the New York Morning Herald (July 12, 1830) ran the following announcement that the offensive NINA advertisements would be refused by their office: 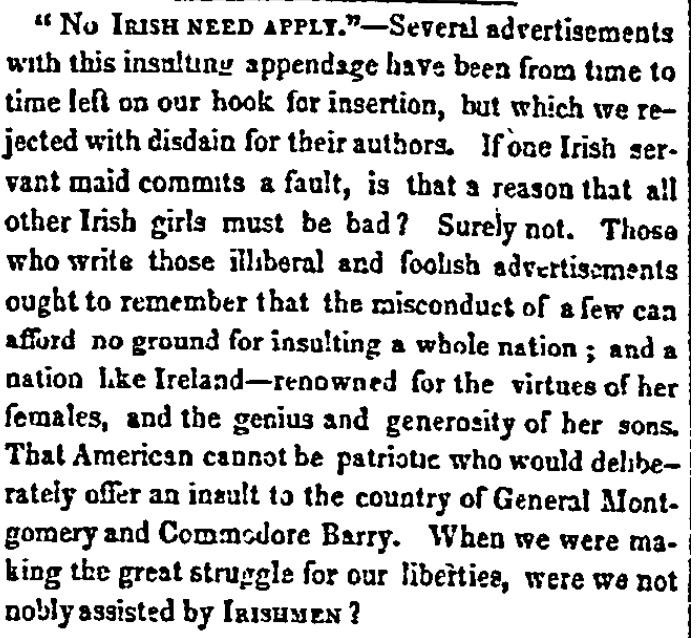 It is perfectly clear that Irish-Americans and immigrants did face widespread animus and discrimination in many parts of the country for probably a hundred years or more.

This prejudice was surely wrong and irrational, but, before we pat our progressive and enlightened selves on the back, we ought to acknowledge at least one way that 19th century America was fairer and more just to immigrants than it is today: It let them come.

However widespread the social prejudice against immigrant groups may have been, the federal government played no role in excluding them.

It was legal (though seemingly frowned upon by many) for individuals and businesses to not hire the Irish, but it was not legal for the government to forcibly deny them the right to live, work, and compete in the Land of the Free.

No musket-bearing SWAT teams kicked in doors, hauled children away from their parents or spouses away from their family, and packed them off to be starved, impoverished, and oppressed by the government of their birth country.

It was not until 1875 that the first anti-immigration controls, primarily targeting Asian women, were imposed in the United States, soon to be followed by the 1882 Chinese Exclusion Act, also explicitly racist in nature.

The Progressive Era of the early 1900s, with its fondness for eugenics and ethnic central planning, saw a series of increasingly harsh and restrictive laws designed to exclude and control racial composition, as well as stop foreign workers from competing with American labor.

We have since abolished explicitly racist immigration quotas, and, in their place, we have erected an almost total ban on immigration from anywhere. A few exceptions are made for the rich and well-educated, and some family members of US citizens (a nice-sounding and beneficial exemption that, coincidentally, has a similar effect as the old quotas designed to make sure that immigrants looked like us).

Today, nondiscrimination laws make it illegal for businesses to say they won’t hire Mexicans, but immigration laws make it actually impossible to hire almost any of them — even if Americans want to hire them and they want to work — just because they happen to have been born in Mexico. Of course, the same goes for the Chinese, and the Irish, and the other 7 billion people on earth.

Is this “speak no evil” approach to injustice against foreigners really so morally superior? I wonder.