Concierge Care for the Little Guy

“We are taking affordable primary care,” Gross says, “and bundling it together with a health insurance program that has to cover hospitalizations, chemotherapy, expensive surgeries, and end-of-life care.” The key to bringing down health insurance costs, he claims, is to divorce basic maintenance from insurance-based catastrophic, palliative, and chronic care.

Healthcare costs have increased by more than 400 percent over the past three decades, hitting the already-squeezed middle class especially hard. The Affordable Care Act (ACA) intends to bring relief by expanding Medicaid and subsidizing low-premium, high-deductible “bronze” plans. But its prospects for reducing the costs of care are limited, according to Gross, because it does not address the conflation of health maintenance and health insurance.

“Primary care does not cost that much,” says Gross, and since “about 90 percent of what most patients need can be accomplished at primary care,” unbundling cheap primary care from expensive catastrophic care would bring healthcare prices “crashing down.” Unbundling is what Gross is doing as president of Epiphany Health, with his model of “concierge care for the little guy.”

Healthcare for the Cost of an iPhone

Gross’s clinic is one of the last independent clinics in southwest Florida, a relatively underserved and economically disadvantaged region. The clinic’s genesis came from Gross’s and his colleagues’ inability to treat Medicaid patients because reimbursement rates were so low—a trend that is only increasing across the country. (According to Kaiser Health, one-third of doctors no longer accept Medicaid patients nationally. The figure is as high as two-thirds in some states, such as Texas.) Rather than leave this population without care, Gross devised a way to serve them while remaining profitable.

He noticed something interesting about his Medicaid patients. They all had iPhones. He believed that if he could offer a health service for a monthly contract fee at about the price of monthly cell service, he could serve the poor and turn a profit.

This model, in which patients pay a monthly flat fee directly to a personal physician—cutting out the insurance companies—to cover primary care, is known as concierge care. Long existent as a niche market, it has been derided as an elitist model for the rich and never seriously considered as a health reform for the general population. Until now.

For $83 a month ($152 for a couple and $49 per additional dependent child), with no copays or deductibles, Gross’s Epiphany Health offers patients 25 office visits per year and covers all primary care needs, including annual physicals, pap tests, mammograms, prostate and colorectal screenings, routine labs, sutures, skin surgeries, and vaccines.

Annually, each member receives a comprehensive metabolic panel, complete blood count, lipid panel, and thyroid panel—tests that would otherwise cost an insured patient about $500, depending on his or her deductible—at no extra cost. There are no restrictions against preexisting conditions.

For specialist care and complicated medical services, which Gross emphasizes can often be taken care of at the primary level, Epiphany partners with physical therapists, ambulance services, and labs, and with cardiology, rheumatology, general surgery, imaging, and orthopedic centers to bring patients network prices close to the average insurance copay.

Gross relays the story of how one of his first patients received an order for blood tests from her rheumatologist: “When she got to the lab, they quoted her $1,800 for the lab tests. She called our office and we rewrote the order under our Epiphany label and the out-of-pocket cost came down to about $85. In one lab test, the patient saved enough money to pay for nearly two years of primary care services.”  Epiphany patients enjoy similar savings for imaging services, paying $200 for an MRI of the spine and $175 for a CT scan of the head.

“We created an entire network of local like-minded physicians and facilities that are willing to sell services at a discount with the understanding that the patients would pay cash at the time of service,” says Gross, adding, “you’d be surprised to see the pricing we get.”

This model allows patients to purchase a low-premium/high-deductible catastrophic care plan running at about $100 a month to insure them in the event of major events or illnesses—such as heart attacks or cancer—that would entail potentially ruinous expenses.

According to the Kaiser Foundation, in 2013, the average monthly cost for a preferred provider organization (PPO) was $500 per individual, making PPOs about three times as expensive as a concierge primary/catastrophic insurance model. Though more expensive for the patient than Medicaid, concierge care provides immediate, quality, and personal care. Concierge care is also significantly cheaper than the ACA’s bronze plan, which averages about $250 a month ($200 with a subsidy) exclusive of copays. See the table below for how Epiphany’s plan compares to the average PPO and bronze plan.

Epiphany’s model is cheaper for all but the sickest patients. 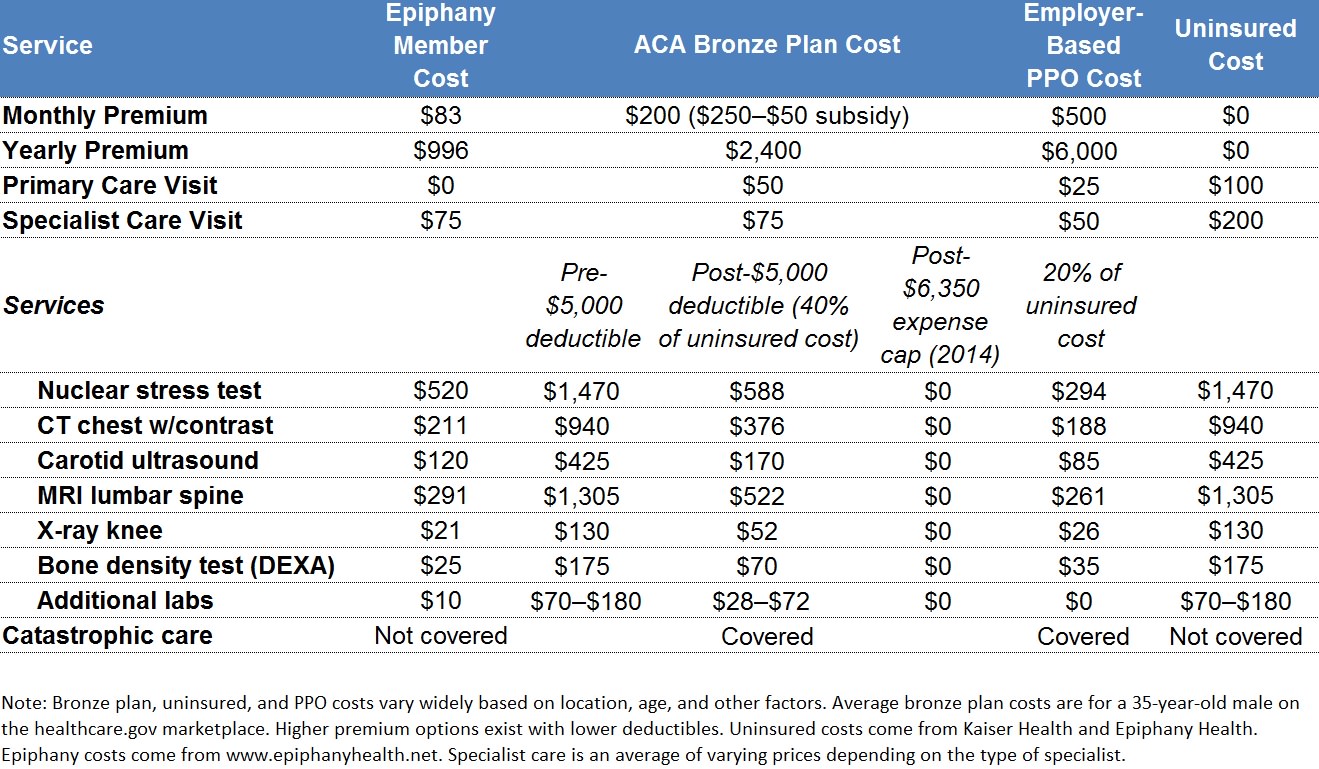 Gross is able to offer these prices by unbundling primary care, which he says is essentially just “brain time,” from expensive catastrophic, palliative, and chronic care. He also achieves savings by eliminating the administrative costs that come from handling insurance. “We were essentially working for the insurance companies,” Gross said of his time prior to opening Epiphany. “We were no longer working directly with the patient.”

Savings for Businesses and Taxpayers

Epiphany’s model has also attracted small businesses that find it cheaper than their PPO models. The owner of a small HVAC company in the area told Gross, “I’m paying $1,000 a month for each of my employees through my Blue Cross policy; why don’t I just pay you to take care of my employees and then I could just get a catastrophic policy?" Even if the company hits the catastrophic policy deductible every year, it will still come out ahead with Gross's plan.

Beyond being an inexpensive option for the consumer, Epiphany’s model also has the potential to save the healthcare system—and ultimately the taxpayer—a great deal of money because of its focus on preventive primary care. This focus allows potentially serious conditions to be detected and treated before they progress to a stage where they threaten patients’ livelihoods. According to oncologist Ezekiel Emanuel, a former White House health advisor, “Tertiary prevention is the key to saving money” because it prevents the next generation of medical complications.

According to Dr. Robert Pearl, CEO of Permanente, the largest medical group in the country, adequate prior intervention provided by cheap primary care could reduce the pool of high-cost healthcare recipients by a third. By preventing high blood pressure from becoming a heart attack, high blood sugar from becoming diabetes, and early stage cancer from becoming later-stage cancer, the system could save billions.

A new CBO report projects that the ACA will cost $2 trillion, and 2.5 million jobs, over its first decade. For a fraction of that cost, the uninsured could be covered by Epiphany’s concierge model. If Americans were so inclined, the savings could be used to create a safety net for catastrophic, chronic, and palliative care, a less-controversial and less-distortionary healthcare reform than the ACA. Those unable to afford the $83 a month would have recourse in Medicaid . . . assuming they wouldn’t give up their iPhones.