Here I am in the hospital. The odor of antiseptic cleaner stings my nostrils. The sound of my pulse pounds in my ears. My wife is in labor.

The joy, of course, is in the event. But we also find joy in the wonders of modern medicine at our disposal. Thanks to antibiotics, incubators, heart monitors (one for mom and one for baby), and a host of other incredible devices, my wife and child are both very likely to come out of this alive and well.
But to listen to some people, it would seem that all this medical technology and material progress has some kind of dark side. It's corrupting, or immoral, or maybe alienating. It is, in a word, “unnatural.”
Throughout our pregnancy, various experts encouraged us repeatedly to have a “natural” birth. This means, among other things, no pain medication for my wife.
In the last century, innovators developed powerful techniques to reduce the pain of childbirth. The most ingenious of these, perhaps, is the epidural—a cocktail of painkillers injected directly into the tissue coating the mother’s spinal cord. It leaves enough pain so that the mother can feel contractions, while insulating her from the worst of the suffering.
But apparently, you shouldn't use an epidural, or any chemical painkiller. It’s unnatural.

In “Why Natural Childbirth?” Judith A. Lothian, a professor at Seton Hall and a prominent advocate of birth without anesthetics, believes “natural childbirth is not about suffering. It is about having the freedom to find comfort in many different ways . . . for example, moving freely, listening to music, taking a shower or bath, and having [the mother’s] feet and hands massaged.”
That is, to be sure, a kind of freedom. But natural childbirth also means avoiding certain methods of relieving pain, and using other less potent ones, such as “taking a shower or bath.” Lothian and her colleagues claim the title of “natural” for their methods because they believe theirs are in tune with women’s “deep, intuitive instinct about birth.” And maybe they are.
The shower in our hospital room had propane-heated water pumped through copper pipes into a plastic tub specially outfitted with a chrome guardrail for safety and ease of entry. It was very nice. But was it natural? Instinctive? Does Lothian think human females have an instinct to deliver their babies in naturally occurring hot springs?
For the advocates of natural birth, a heated shower in a plastic tub fits with their idea of “natural” simply because it’s something we now take for granted in the industrialized West. Surrounded by the wealth and innovation of 200 years of relatively open markets, we’ve had hot baths at home for long enough that perhaps they now seem like a natural part of life.
By contrast, the epidural, even though it’s been used since 1940, is only administered in hospitals. Because it requires skilled technicians who use highfalutin medical terminology, natural birth advocates have concluded such painkillers are just not what nature intended.
To be morally good, they think, one must be natural. To be natural, one must attempt to be pre-technological. On those grounds, during one of the most dangerous and emotionally volatile moments of a woman's life, she should also endure horrendous pain. That pain has becomes fetishized somehow. To endure such pain is a sacred rite of motherhood. To dull the pain is to make childbirth profane.

The truth is, humans are by nature technological animals.
Even 200,000 years ago—when our species first appeared (by the earliest estimates)—the more primitive species from which we evolved already had clothing, fire, temporary shelters, and stone tools. Our own species evolved only after our predecessors had developed a cluster of technologies. With it they were able to survive, develop, and expand.
Today we can survive without fur because our ancestors invented clothing and campfires. We can make do with our small, dull teeth because our ancestors invented cooking and utensils. Innovation is human.

Now, I would never suggest forcing the latest technology on anyone. Each new technique has costs that can only be weighed by the people who pay them. That epidural, for instance, sometimes leaves the mother’s legs too weak to stand on until the next day, so for her there is a trade-off between reducing pain and retaining mobility. No one can decide for a woman which is most important to her experience of birth.
And not every invention is necessarily wonderful. One wonders, for example, whether that 5,000-year-old invention called the State will ever fall into obscurity. Indeed, the State’s intrusion into the hospital through varying degrees of socialized medicine makes it difficult for anyone to calculate the true costs and tradeoffs required for any procedure.
Would the soft, transparent plastic used to transport the epidural painkiller be better used to make iPod cases or children’s toys? Because prices aren’t allowed to send the right signals between producers, providers, and patients, we just don’t know.
Whatever the case, healthcare systems in most advanced nations (quasi-socialized as in the U.S., or fully socialized as in Canada) can afford to be profligate and parasitic thanks to the bounty of markets beyond healthcare.

Until the invention of safe Caesarean sections in the late 1800s, many women and children were doomed to death because a human infant’s head is often too big to pass safely through the mother’s birth canal.
For those children who survived delivery, fully one third died in their first year throughout the precapitalist European Middle Ages. Even by 1900, with the sweeping progress of industrialism and markets, more than 10 percent of all children died in their first year in every country in the world except Sweden (that is, according to this source.)
Since 1900, infant mortality everywhere has fallen dramatically. In advanced capitalist economies, it’s now usually below 1 percent. Here’s a chart from the Centers for Disease Control showing the steady decline of infant mortality in the United States over the 20th century: 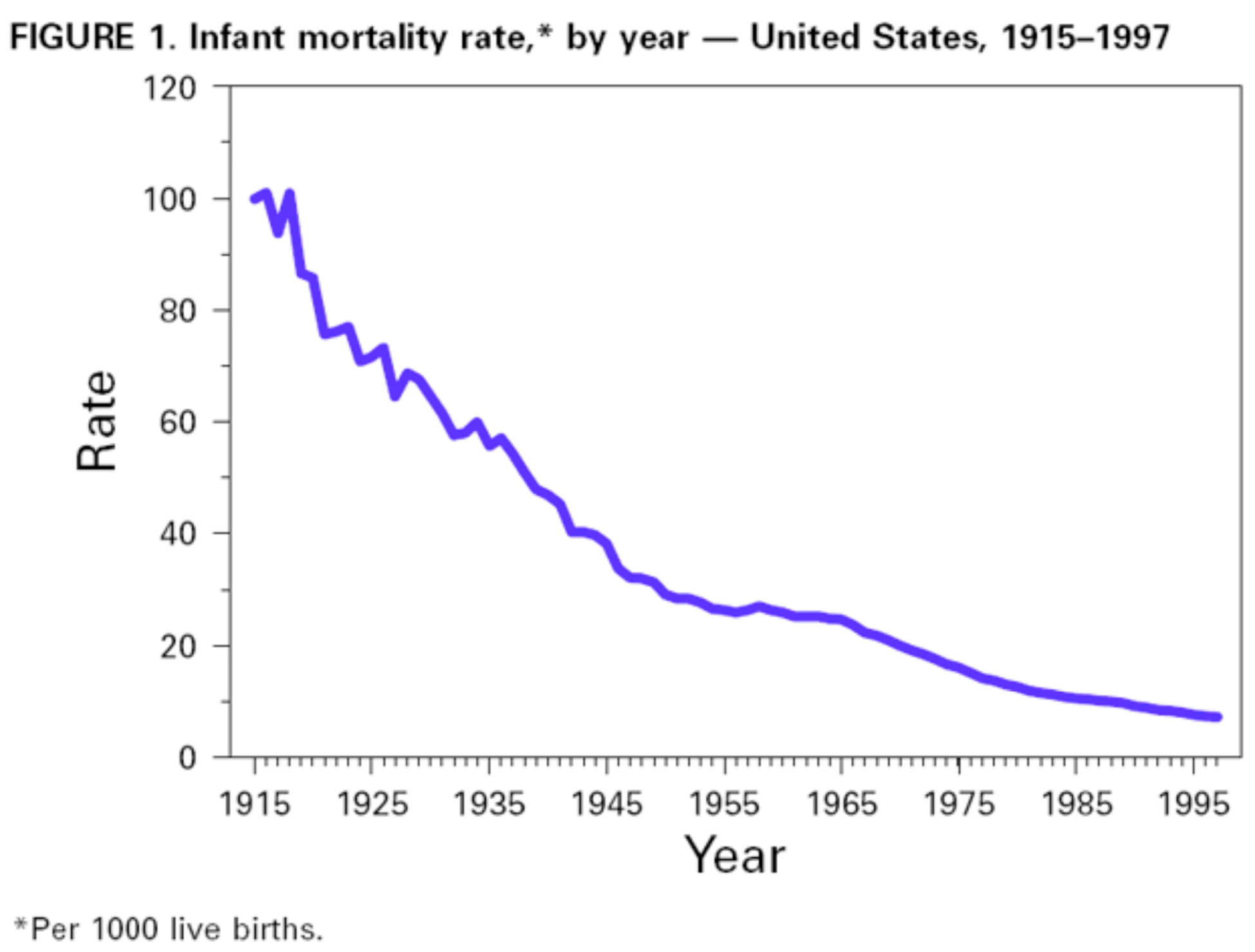 And this graphic from Indur Golkany’s The Improving State of the World shows the glorious drop in the number of infant deaths per 1,000 live births in four data periods from 1950 onward. 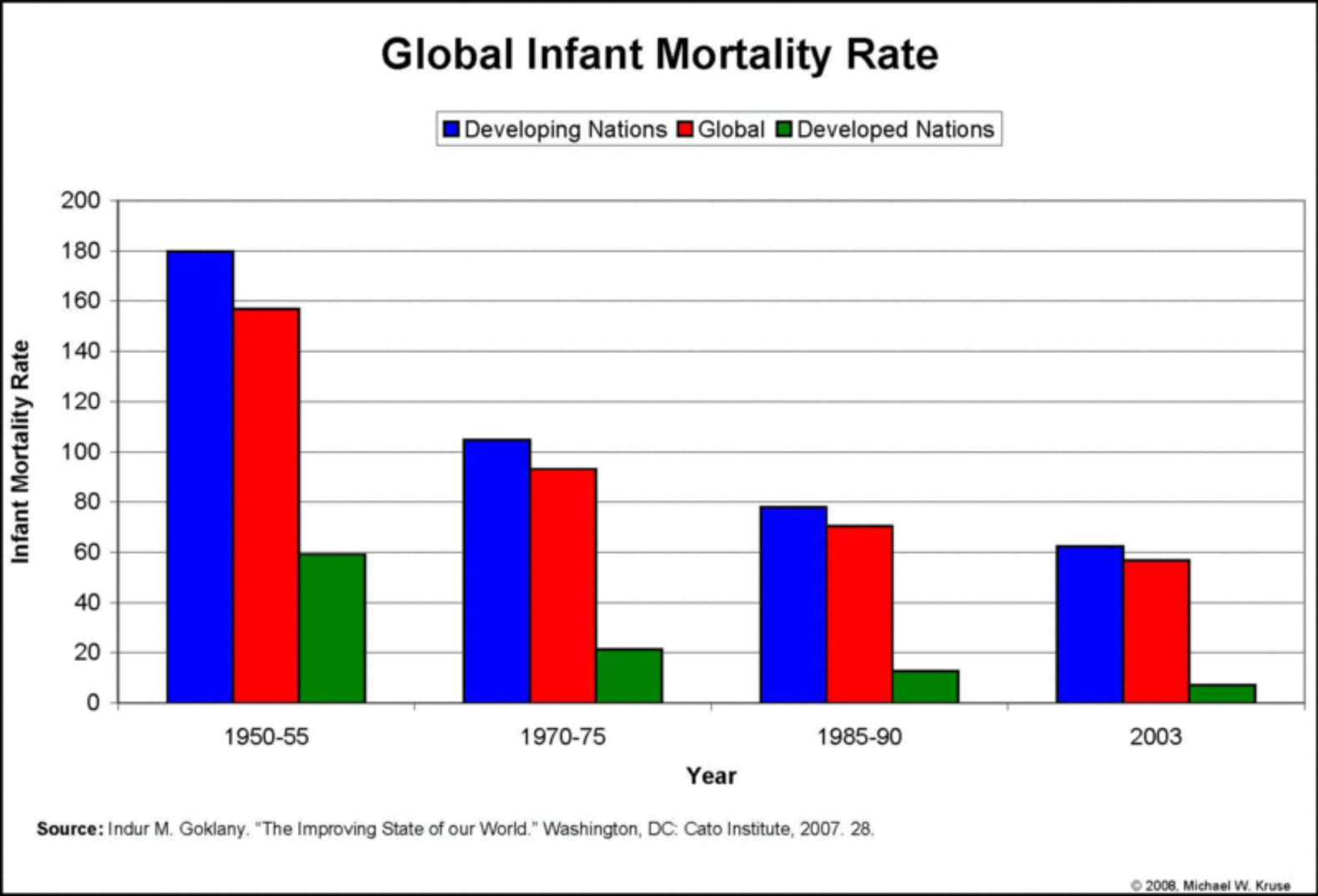 Today, even most “third-world” countries have infant mortality below Sweden’s 10 percent achievement in 1900. This is largely due to the spread of dirt-cheap technologies uses first by the rich but now used by almost everyone—like sterilized water and generic antibiotics.
In the quest for a natural childbirth, should we abandon these advances too?

Often, people make a connection between the false ideal of natural living and the traditions of the feathered and painted peoples now lumped together in the Eurocentric category of "primitive." The idea is that somehow their technologies don't really count.
Would you say the Ju/'hoan hunters of the Kalahari desert, often considered one of the oldest cultures in the world, are “unnatural”? Why not? The bows and arrows they used to hunt for game before colonization were invented probably fewer than 30,000 years ago. And what about the paralytic poisons they use for taking down big giraffes with small arrows? These occur naturally. But their application for hunting is a technological advance.
Would you call the tribal Yanomamo of the deep Amazon “unnatural”? Why not? Their entire traditional economy was based on growing plantains, a kind of banana imported from Asia by Europeans only 500 years ago.
What would a completely “natural,” truly non-technological human look like? Natural clothing would have to mean pure nudity, of course. Natural foods might mean raw rabbits caught with one’s bare hands. And all-natural medicine would mean no potions or powders, no sewing needles, no mind-altering drugs—and that includes pain medications.
Such cultures do not exist, and they never have.
In this sense, there are no “natural” humans.
We humans haven’t got any fur, or claws, or armor, or camouflage. We're not poisonous. We can't fly. Our two legs are much slower than other animals’ four, and we’re not even born with the proper instincts for walking on them.
“Naturally,” we're pitiful, misshapen creatures. “Naturally,” we should be extinct.
Put another way, what's truly natural for humans is invention. We’ve invented campfires and clothing, arrows and agriculture, iPods and epidurals. Invention is who we are.
So when my daughter finally came into this world, after my wife and I had spent 43 hours in the hospital, she did so surrounded by the buzzing and beeping of a dozen life-saving and pain-reducing devices.
My little girl was born in the natural, human way—with the best technology available to ensure her survival and her mother’s.

Mike Reid is a freelance marketing and publishing consultant. Mike lives in Manitoba with his wife and two children.