The OECD Thinks China's Communist Government Is Too Small

China won’t become a rich nation if it follows the OECD's bad advice.

The Organization for Economic Cooperation and Development has published a 136-page “Economic Survey” of China.

My first reaction is to wonder why the Paris-based bureaucracy needs any publication, much less such a long document, when Economic Freedom of the World (EFW) already publishes an annual ranking that precisely and concisely identifies the economic strengths and weaknesses of various nations. 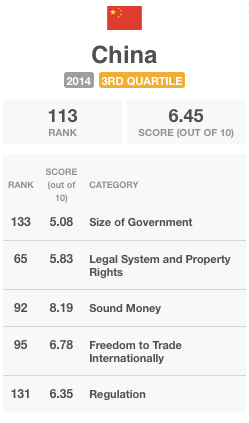 A review of the EFW data would quickly show that China doesn’t do a good job in any area, but that the nation’s biggest problems are a bloated public sector and a suffocating regulatory burden.

This is bad advice for any nation at any point, but it’s especially misguided for China because of looming demographic change.

Though it’s worth noting that China’s mediocre scores today are actually a big improvement. Back in 1980, before China began to liberalize, it received a dismal score of 3.64 (on a 1-10 scale). Today’s 6.45 score isn’t great, but there’s been a big step in the right direction.

One of the most impressive changes is that the score for the trade category has jumped from 2.72 to 6.78 (i.e., moving from protectionism toward open trade is good for growth).

I cite this EFW data because part of me wonders why the OECD couldn’t be more efficient and simply put out a 5-page document that urges reforms–such as a spending cap and deregulation–that would address China’s biggest weaknesses?

To be fair, though, the number of pages isn’t what matters. It’s the quality of the analysis and advice. So let’s dig into the OECD’s China Survey and see whether it provides a road map for greater Chinese prosperity.

But before looking at recommendations, let’s start with some good news. This chart shows a dramatic reduction in poverty and it is one of the most encouraging displays of data I’ve ever seen.

Keep in mind, by the way, that China’s economic statistics may not be fully trustworthy. And it’s also worth noting that China’s rural poverty measure of CNY2300 is less than $350 per year.

Notwithstanding these caveats, it certainly appears that there’s been a radical reduction in genuine material deprivation in China. That’s a huge triumph for the partial economic liberalization we see in the EFW numbers.

Now let’s see whether the OECD is suggesting policies that will generate more positive charts in future years.

The good news is that the bureaucrats are mostly sensible on regulatory matters and state-owned enterprises (SOEs). Here are a few excerpts from the document’s executive summary.

Business creation has been made easier through the removal and unification of licenses. …Gradually remove guarantees to SOEs and other public entities to reduce contingent liabilities. …Reduce state ownership in commercially oriented…sectors. Let unviable SOEs go bankrupt, notably in sectors suffering from over-capacity.”

The bad news is that the OECD wants the government to increase China’s fiscal burden. I’m not joking.

This is bad advice for any nation at any point, but it’s especially misguided for China because of looming demographic change.

Here’s another chart from the report. It shows a staggering four-fold increase in the share of old people relative to working-age people in the country. 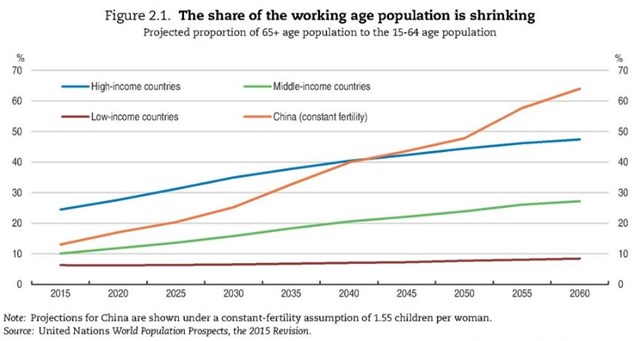 This chart should be setting off alarm bells. The Chinese government should be taking steps to lower the burden of government spending and implement personal retirement accounts so there will be real savings to finance this demographic shift.

…rebalancing of the economy towards consumption is key. …Social infrastructure needs to be further developed…and the tax and transfer system made more progressive. …tax exemptions on interest from government bonds and savings accounts at Chinese banks could be abolished…introduction of inheritance tax.”

What’s especially noteworthy is that the personal income tax in China (as is the case in almost all developing nations) only collects a trivial amount of revenue.

So why not do something bold and pro-growth, such as abolish that repugnant levy and make China a beacon for entrepreneurship and investment?

Needless to say, that’s not a recommendation you’ll find in a report from the pro-tax OECD.

And given the bureaucracy’s dismal track record, you won’t be surprised that there’s lots of rhetoric about the supposed problem of inequality, all of which is used to justify higher taxes and more redistribution.

The OECD instead should focus on growth and poverty mitigation, goals that naturally lend themselves to pro-market reforms.

Which brings me to the thing that’s always been baffling. Why doesn’t China simply copy the ultra-successful policies of Hong Kong, which has been a “special administrative region” of China for two decades? 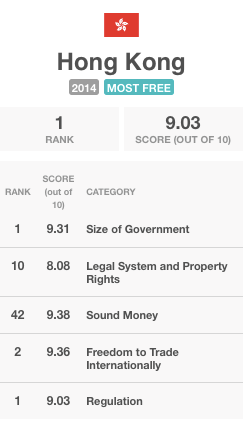 If the leadership in Beijing has been wise enough to leave Hong Kong’s policies in place, why haven’t they been astute enough to apply them to the entire country?

Every so often, I think China is moving in that direction, only to then come across reasons to be pessimistic.

P.S. The OECD’s China report was predictably disappointing, but it wasn’t nearly as bad as the IMF’s report on China, which I characterized half-jokingly as a declaration of economic war.