The Best and Most Complete Review Backs Up Freedom

There are a great many reasons to support educational choice: maximizing freedom, respecting pluralism, reducing social conflict, empowering the poor, and so on. One reason is simply this: it works.

This week, researchers Patrick J. Wolf, M. Danish Shakeel, and Kaitlin P. Anderson of the University of Arkansas released the results of their painstaking meta-analysis of the international, gold-standard research on school choice programs, which concluded that, on average, such programs have a statistically significant positive impact on student performance on reading and math tests. Moreover, the magnitude of the positive impact increased the longer students participated in the program.

As Wolf observed in a blog post explaining the findings, the “clarity of the results… contrasts with the fog of dispute that often surrounds discussions of the effectiveness of private school choice.”

One of the main advantages of a meta-analysis is that it can overcome the limitations of individual studies (e.g., small samples sizes) by pooling the results of numerous studies. This meta-analysis is especially important because it includes all random-assignment studies on school choice programs (the gold standard for social science research), while excluding studies that employed less rigorous methods.

The analysis included 19 studies on 11 school choice programs (including government-funded voucher programs, as well as privately funded scholarship programs) in Colombia, India, and the United States. Each study compared the performance of students who had applied for and randomly won a voucher to a “control group” of students who had applied for a voucher but randomly did not receive one. As Wolf explained, previous meta-analyses and research reviews omitted some gold-standard studies and/or included less rigorous research:

The most commonly cited school choice review, by economists Cecilia Rouse and Lisa Barrow, declares that it will focus on the evidence from existing experimental studies but then leaves out four such studies (three of which reported positive choice effects) and includes one study that was non-experimental (and found no significant effect of choice). A more recent summary, by Epple, Romano, and Urquiola, selectively included only 48% of the empirical private school choice studies available in the research literature. Greg Forster’s Win-Win report from 2013 is a welcome exception and gets the award for the school choice review closest to covering all of the studies that fit his inclusion criteria – 93.3%.

Interestingly, the positive results appeared to be larger for the programs in developing countries rather than the United States, especially in reading. That might stem from a larger gap in quality between government-run and private schools in the developing world. In addition, American students who lost the voucher lotteries “often found other ways to access school choices.” For example, in Washington, D.C., 12% of students who lost the voucher lottery still managed to enroll in a private school, and 35% enrolled in a charter school, meaning barely more than half of the “control group” attended their assigned district school.

The meta-analysis also found larger positive results from publicly funded rather than privately funded programs. The authors note that public finding “could be a proxy for the voucher amount” because the publicly funded vouchers were worth significantly more, on average, than the privately funded scholarships. The authors suggest that parents who are “relieved of an additional financial burden… might therefore be more likely to keep their chid enrolled in a private school long enough to realize the larger academic benefits that emerge after three or more years of private schooling.” Moreover, the higher-value vouchers are more likely to “motivate a higher-quality population of private schools to participate in the voucher program.” The authors also note that differences in accountability regulations may play a role.

The Benefits of Choice and Competition

The benefits of school choice are not limited to participating students. Last month, Wolf and Anna J. Egalite of North Carolina State University released a review of the research on the impact of competition on district schools.

Although it is impossible to conduct a random-assignment study on the effects of competition (as much as some researchers would love to force different states to randomly adopt different policies in order to measure the difference in effects, neither the voters nor their elected representatives are so keen on the idea), there have been dozens of high-quality studies addressing this question, and a significant majority find that increased competition has a positive impact on district school performance:

In other words, the evidence suggests that when district schools know that their students have other options, they take steps to improve. This is exactly what economic theory would predict. Monopolists are slow to change while organizations operating in a competitive environment must learn to adapt or they will perish.

Of course, not all school choice programs are created equal. Wolf and Egalite offer several wise suggestions to policymakers based on their research. Policymakers should “encourage innovative and thematically diverse schools” by crafting legislation that is “flexible and thoughtful enough to facilitate new models of schooling that have not been widely implemented yet.” We don’t know what education will look like in the future, so our laws should be platforms for innovations rather than constraints molded to the current system.

That means policymakers should resist the urge to over-regulate. The authors argue that private schools “should be allowed to maintain a reasonable degree of autonomy over instructional practices, pedagogy, and general day-to-day operations” and that, beyond a background check, “school leaders should be the ones determining teacher qualifications in line with their mission. We don’t know the “one best way” to teach students, and it’s likely that no “one best way” even exists. For that matter, we have not yet figured out a way todetermine in advance whether a would-be teacher will be effective or not. Indeed, as this Brookings Institute chart shows (see page 8), there is practically no difference in effectiveness between traditionally certified teachers and their alternatively certified or even uncertified peers: 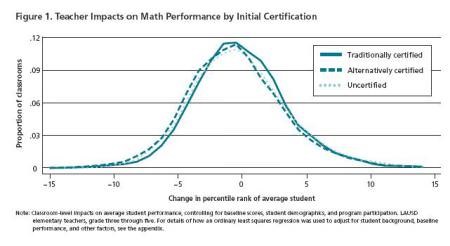 In other words, if in the name of “quality control,” the government mandated that voucher-accepting schools only hire traditionally certified teachers, not only would such a regulation fail to prevent the hiring of less-effective teachers, it would also prevent private schools from hiring lots of effective teachers. Sadly, too many policymakers never tire of crafting new ways to “ensure quality” that fall flat or even have the opposite impact.

School choice policies benefit both participating and nonparticipating students. Students who use vouchers or tax-credit scholarships to attend the school of their choice benefit by gaining access to schools that better fit their needs. Students who do not avail themselves of those options still benefit because the very access to alternatives spurs district schools to improve. These are great reasons to expand educational choice, but policymakers should be careful not to undermine the market mechanisms that foster competition and innovation.

You can find a Portuguese translation of this article here.