Millennials Are in a Love Triangle with Capitalism and Socialism

There's a disconnect between Millennial economic attitudes and behavior. 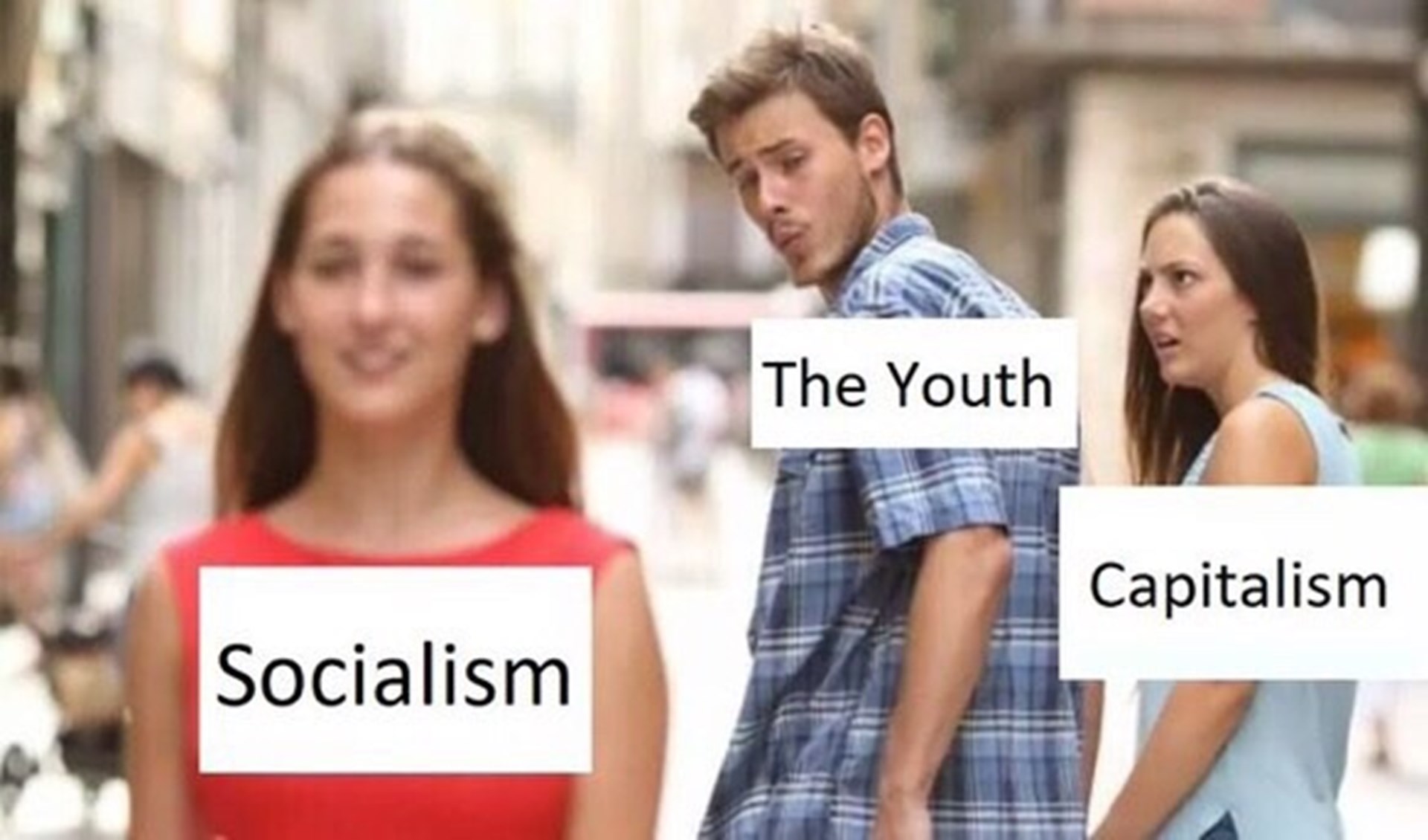 There’s been a lot of talk recently about how Millennials — the generation born between roughly 1980 and 2000 — think about economics. Much of it was sparked by the fanatical support for self-described “Democratic Socialist” Bernie Sanders from young people in the Democratic primary for president last year.

Millennials have economic attitudes that are different from older Americans.

Gallup found in April 2016 that, whereas Hillary Clinton had a net favorability rating of -23 among 18-24 year-olds, Sanders’s score was +39.

A Harvard University poll administered at about the same time revealed how this has been translated into policy views. The survey reported that only 42 percent of Millennials supported capitalism. According to a contemporaneous Gallup poll, that was about 10 percentage points lower than the general population. The Harvard survey showed 33 percent of Millennials wanted socialism.

So Millennials have economic attitudes that are different from older Americans. But is their economic behavior different? Do they walk the socialist walk?

Here, the evidence is decidedly mixed.

Socialists tend to embrace public goods because all citizens can consume them. Millennials certainly like them. A Pew Research Center poll from June revealed 45 percent of 18–29-year-olds favored a single-payer health care system. This was 14 percentage points higher than any other single age group.

Census data show Millennials adopted health insurance more rapidly than any other age cohort when Obamacare began in 2014-15. I’m not entirely sure what kind of political philosophy this behavior illustrates, but it does seem to suggest Millennials embraced the Affordable Care Act, legislation most people believe moved health care in this country solidly to the left.

Socialism, unlike capitalism, makes a virtue of constrained personal consumption. A major reason for this, of course, is that it is less suited to production. But the connection has helped fuse ecology to socialism in the platforms of left-wing parties across the globe.

Millennials talk about saving the planet but they don't seem to be doing more than anyone else to secure our world’s survival.

You may have heard the argument that Millennials are more environmentally conscious than the rest of us — they don’t use plastic shopping bags or flush the toilet, etc. A survey commissioned by Rubbermaid reported earlier this year that two-thirds of Millennials would give up social media for a week if everyone at their company recycled.

Interestingly, however, the data on behavior do not bear this out. A 2014 Harris poll conducted for the Institute of Scrap Recycling Industries (ISRI) revealed that whereas roughly a half of respondents over thirty said they “always” recycled, only a third of the younger group did.

Millennials talk about saving the planet for humanity, behavior a socialist mindset deems heroic, but they do not seem to be doing more than anyone else to secure our world’s survival.

Millennials also use public transportation much more than other groups. Over one-fifth ride a bus or train on a daily or almost-daily basis according to a Pew survey from late 2015. This was nearly double the proportion of any other age group.

Indeed, younger people seem to have much less love than their elders for that ultimate of American private goods, one’s own car. The number of licensed drivers in both the 24-29-year-old and 30-34-year-old cohorts decreased by about 10 percent between 1983 and 2014 according to the University of Michigan’s Transportation Research Institute. The drop for 18-year-olds was a fifth. At the same time, everyone over 45 continues their love affair with the automobile.

This seems consistent with the socialist rejection of material goods, but whether this is correlation or causation is unclear.

Moreover, Millennials have almost single-handedly nurtured the “sharing” economy — a marketplace in which peer-to-peer transactions are facilitated by a software platform that permits participants to divide consumption, as exemplified by Uber and Airbnb. According to Vugo, 57 percent of all ridesharing customers are aged 25 to 34.

The sharing economy may sound quite socialist because it seems to eschew private ownership. But as Duke professor Mike Munger has pointed out, people, in general, wish to consume the services that tangible goods provide, not the goods themselves. The sharing economy, in fact, provides access to the services of more material goods than the user would otherwise have — whether that’s a five-minute ride in a car or a two-day stay in a house. Its fundamental principles, therefore, are capitalist.

A 2014 Bentley University survey of Millennials reported that two-thirds of respondents expressed a desire to start their own business. But Millennial behavior is different. An analysis by the Wall Street Journal last year found that the proportion of Americans under 30 who own a business has dropped by 65 percent since the 1980s. Millennials might say they want to be Mark Zuckerberg, but they’re not particularly entrepreneurial.

The Great Recession has left them playing financial catch-up.

There does exist therefore a disconnect between Millennial economic attitudes and behavior. What explains it? The generation is intrigued by the idea of socialism. It embraces many of its values and the public policies that would bring it about. But Millennials’ behavior is ambiguous. Entrepreneurship in private enterprise is not a particularly appealing career path to them in practice.

Additionally, Millennials’ reduced consumption is probably as much a function of economic necessity as it is a sacrifice of their personal wants to some grand social plan. The Great Recession has left them playing financial catch-up. A Pew analysis of census data reveals 15 percent of 25-to-35-year-olds still live with their parents. Traditionally that fraction has been around one-tenth. A 2016 study by the left-leaning Center for American Progress found that Millennials make less than Gen Xers did in their early 30s. They only earn about the same as Boomers, who are 30 years older and 50 percent less likely to have graduated from college.

So perhaps there’s another explanation: When they appear to be rejecting capitalism, it’s often because Millennials are simply adjusting America’s core economic principles to new technologies and economic realities.

Andrew J. Taylor is professor of Political Science in the School of Public and International Affairs at NC State University. He received his Ph.D. from the University of Connecticut and teaches courses in American politics, including Introduction to American Government, the Presidency and Congress, the Legislative Process, Public Choice and Political Institutions, and the Classical Liberal Tradition.