How Really To Stop Cultural Appropriation

If we are going to draw bright lines around cultures, and bar borrowings, let's get really serious about it and see what happens. 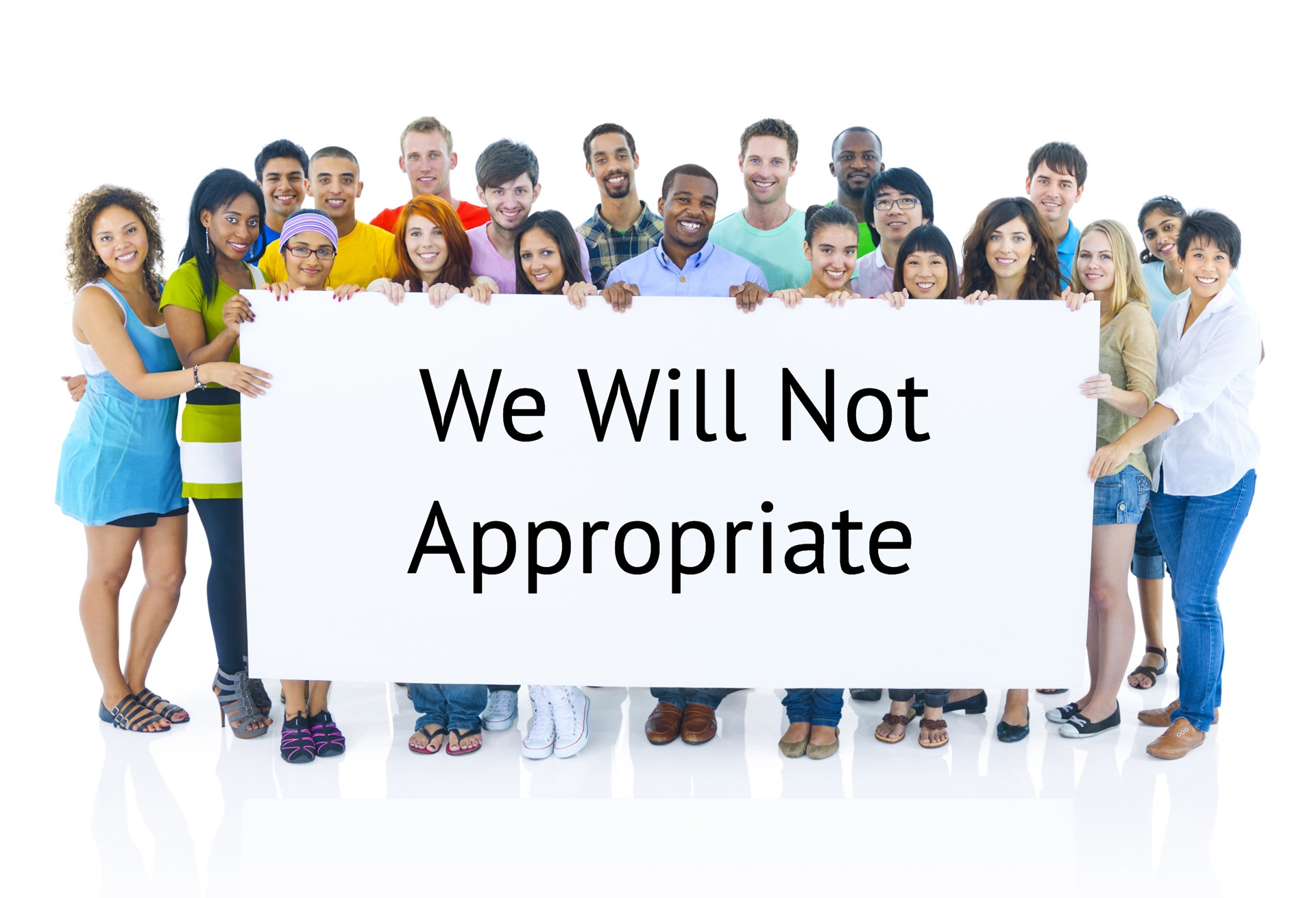 Imagine the following discussion between two white Millennials in Portland: “Kim” (a fervent progressive) and “Josh” (whose politics are murky for the moment).

KIM: (rushing up to him and shoving a leaflet in his face): Excuse me! Er, Hi! Could I ask you please not to do that?

KIM: Not participate in the cultural appropriation of Latina cuisine. You see those people running the truck?

KIM: Notice anything about them?

JOSH: They look kind of sweaty.

KIM: What gives them the right to colonize the food traditions of a marginalized and oppressed people, and profit from it?

JOSH: (peering at the truck) It looks like they have a vendor’s license from the city.

KIM: Does that make it right? Who runs this city? Who dominates its government?

KIM: Well this is an issue they’re missing. We’re trying to pass an ordinance.

JOSH: What would it do?

KIM: Well, you do know that dozens of restaurants in Portland serve cuisines from other cultures.

JOSH: One of the better things about it.

KIM: Did you realize that many of those businesses are owned by white people? Not people from the respective countries, cultures, or marginalized groups?

JOSH: Oh, so you’re saying they’re not authentic? I always do prefer places that stick to the original recipes, even when they’re kind of exotic. Did you ever have Mexican-style crickets? Crunchy! But then you have to floss out the legs. …

KIM: (seems to throw up a little in her mouth, continues) Well that is wrong. Those business owners are using their own unequal access to business capital, then appropriating the cultural capital of less-privileged groups. That’s stealing.

JOSH: So are the white businesses conspiring to prevent the non-white businesses from opening? Are they poisoning their food? Spreading false rumors about them having rats on Yelp?

KIM: No, they are stealing their culture. Isn’t that worse?

JOSH: Not sure I’m getting this. So you’re saying that they’re just competing with the restaurants owned by actual Mexicans or Laotians or Lilliputians?

KIM: (quickly, defensively) No, that’s not the same. Art was meant to be free. This is the fruit of a people’s corporate struggle for survival against colonial oppression and white dominance. It’s totally different.

JOSH: Right, of course. I see what you mean. You know, this problem goes a lot deeper than you might thnk.

JOSH: Well, if white business owners have more access to money than immigrant cooks, and it’s wrong for them to cook the same food. … Don’t you and I have a lot more money than kids who are illegal aliens?

KIM: What? That is so offensive. No one is illegal. And they aren’t aliens. What are they, from outer space?

JOSH: You’re right. So sorry. You and I have a lot more disposable income than undocumented immigrants. Don’t we?

JOSH: So then you and I are competing unfairly with them by eating at ethnic restaurants. We’re filling seats, running up the prices, appropriating their hard-won cultures, while stuffing our faces with the food their countrymen and women slaved to make. It’s wrong.

KIM: Really? You think so?

KIM: I know. I can’t believe I used to do yoga. I’m so embarrassed now.

JOSH: The structures of oppression are really, really deep-seated… what’s your name? I didn’t catch it.

JOSH: Josh. Josh Merkel. So do you and I really have any business crowding out Latinos and Latinas at their own restaurants, bidding up the food prices?

JOSH: But then how do we explain what’s wrong with you doing yoga?

KIM: Well, what I read at Jezebel is that it’s an unearned consumerist claim that I’m making as a silly white girl to an ancient religious tradition that doesn’t belong to me. So it’s offensive.

If we really want to show respect for other cultures, we’re going to have to start drawing some bright lines between them.

KIM: I guess? Is yoga Hindu? Then yeah.

JOSH: You mean, if they happened to see you doing it at home? Through your window?

KIM: Yeah, if some were passing by.

JOSH: And looking inside…. What if you drew your curtains? Would it still be wrong?

KIM: Ooh, you’re getting philosophical now. (She tilts her head flirtatiously.) But yeah, I think so. I mean, is it okay to say the “n-word” alone at home? No. It’s just intrinsically wrong.

JOSH: Okay, that makes sense. Again, the tendrils of oppression reach much further than we like to admit.

JOSH: Yeah. Do you realize that the very numbers we use are stolen? We call them Arabic, but in fact they’re also of Indian, Hindu origin.

KIM: Wow. Maybe I somehow sensed that—which is a good excuse for why I suck at math. Ha ha….

JOSH: Worth thinking about. We have our own Western number system, Roman numerals. But you don’t see us using it in labs. Do you?

JOSH: This whole issue is really worth pursuing as far as it goes. You do know that much of Western Christian culture is simply stolen, outright, from Judaism.

KIM: Yeah, that is wrong, too.

JOSH: I mean, what was Jesus thinking? Why couldn’t he simply respect other cultures, like we’re learning to do?

KIM: Well, don’t get me started on those Christian fundamentalists….

JOSH: You don’t happen to be Jewish…?

JOSH: (momentarily looks relieved, then knits his forehead) So you wouldn’t have a right to appropriate the Ten Commandments, would you? I’m not Jewish either. So nor could I.

JOSH: It seems to me that if we really want to show respect for other cultures, and the people whose distant ancestors created them, we’re going to have to start drawing some bright lines between them. And then we’ll need to stay within those lines. We shouldn’t be hijacking the recipes, costumes, books, music, ideas, or other precious cultural artifacts of other races.

KIM: No, definitely not.

JOSH: Let them read their works of literature, and we’ll read ours. Want to see what I’m working on? (He pulls out a copy of the Niebelunglied.) These are the epics of the European peoples. Set to music by Wagner. Ever listen to Wagner?

JOSH: Now is that really appropriate? For a blue-eyed blonde like you?

KIM: (looking embarrassed) I can totally try Wagner. Have you ever seen him sing live?

JOSH: (smiles very differently) Well, no. Can’t say that I have. (pauses, points covertly to an interracial couple walking down the street—black guy, white girl)

JOSH: See those two? They’re appropriating each other. And she is really disrespecting the struggle of black women.

KIM: You think so?

JOSH: You know how many black women resent the preference some black men have for white girls?

KIM: Yes, I did hear about that. During a cultural studies class.

JOSH: Well you white girls need to cut it out. How is that any better than Thomas Jefferson and Sally Heming? If we respect the integrity and the heritage of other races, we probably shouldn’t be trying to sleep with them—seducing them away from their own people, one by one, and diluting their ethnicity with our pasty-faced white chromosomes.

KIM: Wow, I never really thought these ideas through to…

KIM: You are just so… interesting. I’ve never met somebody like… you.

JOSH: Oh, I’m not alone. In fact, play your cards right, and I’ll bring you to a meeting. It’s a whole new movement of white people who have learned to keep to themselves. We don’t appropriate anybody’s culture. We stick to our own, leave everybody else in peace. Our group has too much respect for black and brown people, for Jews and Latinos, to mix up our culture with theirs. Or our seed, if you know what I mean. (he winks, gives her arm a little squeeze)

KIM: (rolls her eyes) Yeah, you dirty boy. I know what you mean….

JOSH: Now how would like to come with me to this really cool German restaurant? My family’s German/Swedish. You’re German, right?

JOSH: But not Jewish at all?

KIM: I wish, I’d get better grades. Wait, is that offensive?

JOSH: Pretty offensive. But I’ll let you off the hook. Let’s go get some schnitzel. I’ll ask the restaurant to play us some Wagner….

This piece is adapted from The Stream

John Zmirak is Senior Editor of The Stream, and author of The Politically Incorrect Guide to Catholicism. Follow John on Twitter here.