U.S. goods exports to China (excluding services) fell by 26.3 percent from March through October, while U.S. imports from China rose by 36.5 percent.

The Trump administration’s trade warfare with China began in earnest last March 22 (following steel and aluminum tariffs that primarily hit other countries). U.S. and Chinese tariffs on each other’s goods then escalated repeatedly through September 18 with threats of much more of the same by March 1 of this year.

The effect so far has been quite different from what President Trump first promised and still keeps pretending. In fact, U.S. goods exports to China (excluding services) fell by 26.3 percent from March through October, while U.S. imports from China rose by 36.5 percent. 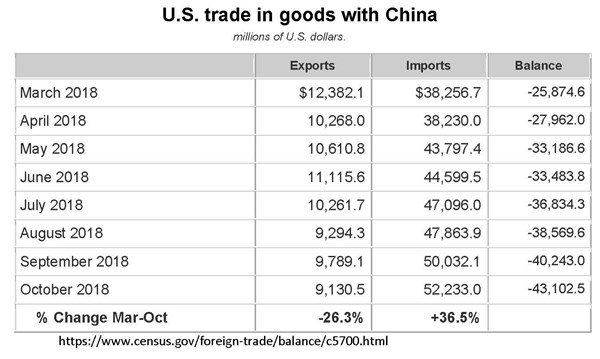 Meanwhile, the Trump shutdown is rationalized by his fanciful untruths about people and drugs “flooding across the border” on foot between checkpoints, rather than in planes, trains, ships, trucks, and cars (not to mention overstaying visas).

Oddly enough, Mr. Trump waited until after Republicans had lost the House to demand more billions for “The Wall” (as though the executive branch wrote the laws).

If the end result of political feuding over a border wall turns out to be half as big a fiasco as President Trump’s trade war, how could he hope to run for reelection on the blatant failure of his two noisiest campaign issues? But it might not be too late for Trump to quietly discard his losing cards and pivot toward more promising games and issues.