Could the Market Really End Meat?

Animal rights will be the big social revolution of the 21st century. Most people have a vague feeling that factory farms aren’t quite ethical. But few people are willing to give up meat, so such feelings are suppressed because acknowledging them would only make one feel guilty. Once the costs of giving up meat fall, however, vegetarianism will spread like a prairie wildfire, changing eating habits, the use of farmland, and the science and economics of climate change.

Lab-grown or cultured meat is improving, but so is the science of veggie burgers. Beyond Meat has sold a very successful frozen “chicken” strip since 2013, and their non-frozen burger patties are just now seeing widespread distribution in the meat aisle at Whole Foods. Beyond Meat extracts protein from peas and then combines it with other vegetable elements under heating, cooling, and pressure to realign the proteins in a way that simulates the architecture of beef.

I picked up a two-pack on the weekend. Beyond Meat burgers look and cook like meat. But what about the taste? 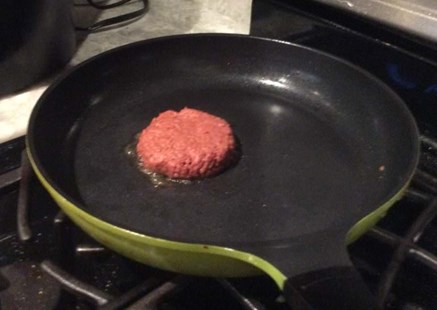 The taste is excellent. The burger has a slightly smokey taste, not exactly like beef, but like meat. If you had never tasted a buffalo burger before, and I told you that this was a buffalo burger, you would have no reason to doubt me. A little sauce and salt and pepper, and this is a very good-tasting burger, not a sacrifice for morality.

The price is currently more than beef, $6 for two patties, but that’s Whole-Foods expensive, not out-of-reach expensive. I will buy more.

The revolution has begun. 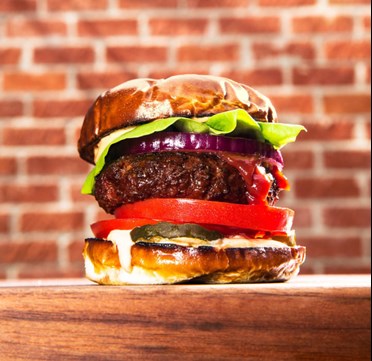 The second picture is the BuzzFeed version. My burger wasn’t quite so artfully arranged but was still delicious, and I attest to the overall accuracy.