The Problem with Education Isn’t Spending 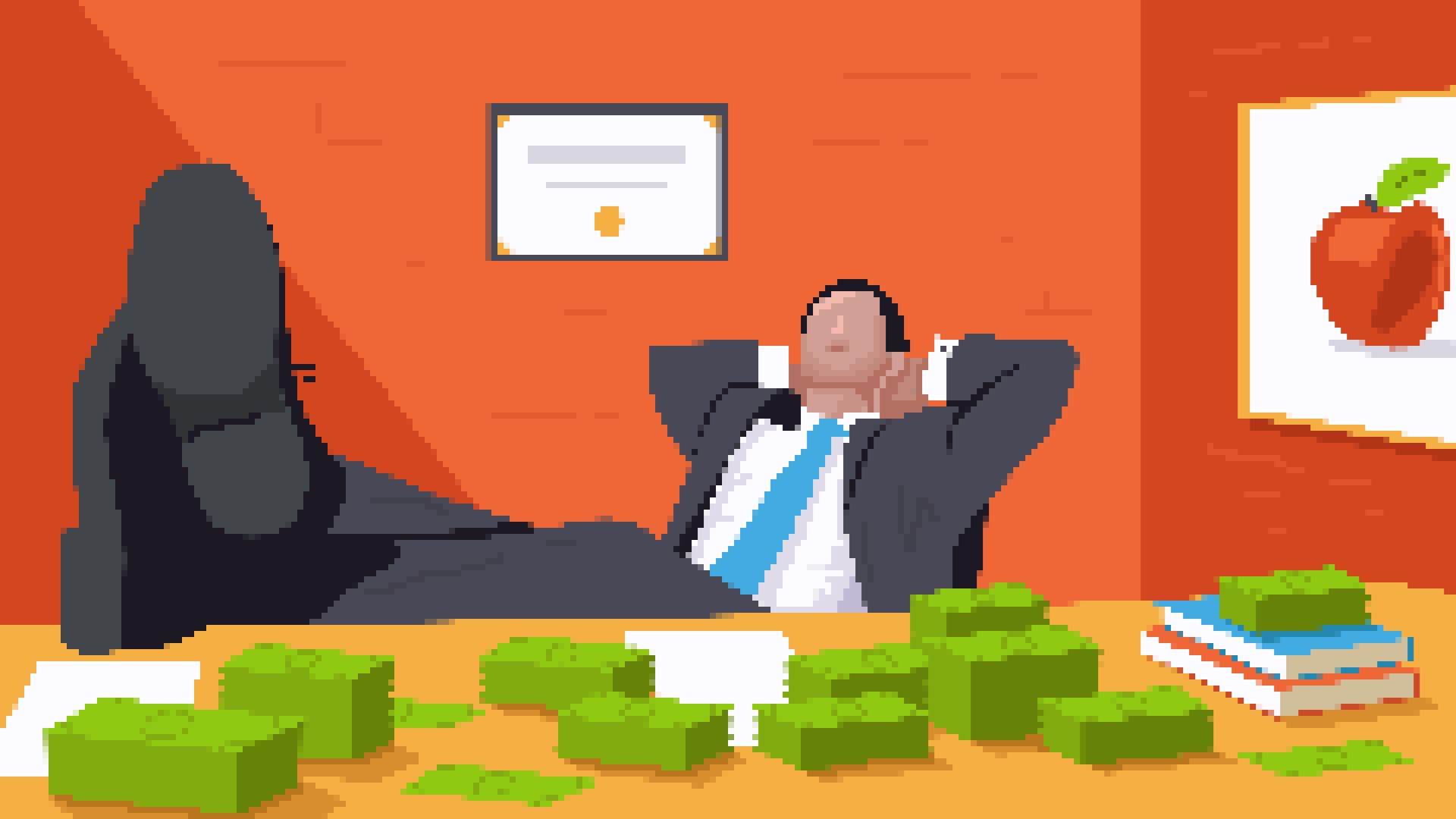 Q: If American schools were better-funded, would student achievement and academic outcomes soar? Are we just not investing enough money into our public schools? Is that why students are suffering?

A: It might seem plausible that lack of adequate funding is what plagues America’s public schools. After all, we see headlines of multi-day teacher strikes demanding salary raises and lamenting pension problems. And The New York Times describes vividly the poor quality of public schooling infrastructure and supplies.

Digging more deeply into the numbers, though, reveals that lack of money may not be the culprit. American taxpayers spend $634 billion every year for K-12 public schooling. That works out to over $12,000 per student spent annually. In fact, the U.S. spends more on education than most other developed nations, and our public school spending has increased dramatically over the past half-century.

According to data from the National Center for Education Statistics, since the Second World War, U.S. education spending, adjusted for inflation, rose 663 percent! Much of this increased spending went to hire teachers and staff. Between 1950 and 2009, staff hiring increased four times as much as student enrollment.

Q: Maybe hiring more teachers and support staff was a good thing. Are students learning more because of it?

A: As the chart below from the Cato Institute shows, despite massive funding increases for public schooling and more staff hirings, student academic performance remains flat:

For all this investment, public schooling academic outcomes are mediocre at best. The results of the 2017 National Assessment of Education Progress (NAEP), also known as the “Nation’s Report Card,” show stagnant scores in reading and math, and a widening gap between poorer-performing students and higher-performing ones. Only 35 percent of the nation’s eighth graders are scoring at or above the ‘Proficient’ level in reading, and only 34 percent of eighth graders are proficient in math.

On international comparison tests, such as the highly-respected Program for International Student Assessment, U.S. students are falling behind their peers in other nations, with U.S. 15-year-olds ranking 38th out of 71 countries in math and 24th in science.

Q: Although more teachers and staff have been hired for public schools, they may not be adequately compensated. Teachers work so hard and their role in society is so important, their work is as valuable as a doctors. If we paid teachers more, would we get better teachers? Could this help improve student performance?

A: The vocal uprisings by teachers unions, and the sincere goodwill we have toward the teaching profession, cause us to sympathize when teachers claim they are underpaid. But again, the numbers simply don’t add up. The American Enterprise Institute (AEI) compared teacher salaries to other professions and found that teachers are being paid “market-level wages.” When adding in teachers’ generous retirement benefits, their overall compensation package is dramatically higher than private-sector employees. Most public school teachers receive pensions with generous retirement healthcare coverage, something unavailable for most private-sector jobs. This pension and healthcare burden is sapping school districts dry.

The AEI researchers analyzed Bureau of Labor Statistics data and found that “public school teachers on average receive salaries about 8 percent above similar private-sector jobs.” Salaries in any industry are determined by the supply and demand of the workers’ skills and talents. According to the AEI article, when teachers switched to non-teaching jobs, their wages actually declined.

Q: Should we be allocating more money to our inner-city schools, which educate large populations of underprivileged youth? Students there are struggling the most and could benefit greatly from more resources and support.

A: We are right to focus on ways to provide educational opportunity to all children, and we should be particularly concerned about helping young people from disadvantaged backgrounds have equal educational opportunity. More money may not be the answer, however. Recent government efforts to channel more funding and resources to inner-city public schools showed disappointing results.

As reported by The Washington Post, U.S. Department of Education data released in early 2017 by the outgoing Obama administration revealed that despite funneling billions of federal dollars into failing inner-city schools through direct School Improvement Grants, there was no difference in test scores, graduation rates, or college enrollment between the schools that received the grants and those that did not. This education policy initiative, according to the Post article, was "the largest federal investment ever targeted to failing schools," sending $7 billion of taxpayer money into the program between 2010 and 2015.

Q: If not more money, what might help to improve education outcomes?

A: Instead of more money, provide more choice. Parents should be able to choose from a variety of education options for their children, rather than be forced into mandatory compulsory schooling.

Compulsory public schooling is a relatively recent societal idea. The first American compulsory schooling statute was passed in Massachusetts in 1852, mandating school attendance for children ages 8-14 as well as mandating taxpayer funding for these “common schools.” Prior to this law, there was a wide assortment of education options for parents to choose from, including public schools, private schools, charity schools, church schools, homeschooling, and apprenticeship programs. Compulsory schooling laws limited parental choice, particularly for more disadvantaged families, who often had no other option than to send their child to the new common schools. More privileged families, like Horace Mann, the proclaimed “father of American public education” who was instrumental in passing the 1852 law, continued to homeschool his own children with no intention of sending them to the common schools he mandated for others.

Prior to the 1852 compulsory schooling law, Massachusetts and other states had broad “compulsory education” laws. These laws acknowledged a societal interest in an educated citizenry, but did not specify—or mandate to parents—any particular mode of education. Families were free to choose from an assortment of education options, and the state had limited power over a parent’s education choices. Disentangling schooling from education, while loosening compulsory schooling statutes, could expand educational opportunities for children and empower parents to find the best educational setting for their child.

Q: But can't parents already opt-out of compulsory schooling by homeschooling their kids?

A: Limiting the state’s role in education would free up more parents to homeschool their children as they choose. While homeschooling has been legally recognized in all 50 U.S. states since 1993, many states highly regulate homeschoolers, often subjecting homeschooled children to statewide homeschooling approval regulations, standardized testing, curriculum requirements, and government oversight. These regulations can be challenging for homeschooling parents. Increasingly, parents are choosing the homeschooling path out of frustration over the heightened focus on national curriculum frameworks and regular standardized testing. Homeschooling parents often opt-out of conventional schooling for the freedom and flexibility to tailor education to the unique needs of their child. Limiting state control over homeschooling can encourage more parents to choose this option, as well as free them to be more innovative in customizing their education approach to fit their child’s needs and interests.

Unschooling, or Self-Directed Education, is a form of homeschooling that is gaining in popularity and influence. No exact numbers exist, but estimates suggest that between 10 percent and 50 percent of homeschooling families embrace the unschooling philosophy. Most simply, unschooling rejects the idea that schooling (including school-at-home homeschooling) is the most effective way to be educated. Instead, unschoolers learn throughout their everyday living, by following their interests, pursuing their passions, and being surrounded by ample community resources and supportive adults. Most unschoolers learn at home and throughout their community, but an increasing number of entrepreneurs are creating self-directed learning centers and unschooling schools with flexible attendance options that make this education choice more accessible to more families. Limiting government control over unschooling parents, as well as preventing heightened regulation of unschooling schools and centers, can ensure that education innovation is supported and nurtured.

Q: What about for families who can’t homeschool or unschool? What education options do they have?

A: Unless parents can afford to pay for a private or parochial school, or choose homeschooling/unschooling, their education choices are limited. Most often, their only option is to send their child to an assigned district school, or maybe attend a public charter school if one is available to them and if they are lucky enough to win a spot in the often-competitive charter school lottery system. While allowing for slightly more education innovation than traditional district schools, charter schools still operate as public schools and often replicate traditional school curriculum and assessment procedures.

For parents who want real education choice, they need a personal piece of the education spending pie. That is, they need access to some (or all) of their tax money that currently pays for the public school that they choose not to use. Vouchers are one education choice mechanism that allows families to allocate a share of public funds toward private education options. Education Savings Accounts (ESAs) and tax credits are other choice options that, if scaled, could re-empower parents and encourage education entrepreneurship. ESAs, in particular, have advantages over vouchers in allowing parents to allocate some of their school tax contribution to a government-approved savings account. This account can then be used for education expenses, including private school tuition, but also toward other education options such as tutoring and materials, online courses, and college tuition. As Corey DeAngelis explains: “Education and schooling are not the same thing. While vouchers allow for private school choice, ESAs allow for educational choice.”

Q: Is there any hope for parents stuck with sending their child to an assigned district school? Are there any good efforts to improve conventional schooling?

A: While providing parents with a variety of educational choices for their children is the preferred goal, some promising efforts are underway to make schooling less restrictive. Increasingly, parents are opting-out of high-stakes standardized testing for their children. They are pushing back on national curriculum frameworks and advocating for greater local control over their schools. And they are striving to bring back childhood play—particularly for younger children who are increasingly forced, through curriculum and testing, to achieve academic benchmarks at disturbingly early ages. For instance, research by assistant professor of education, Daphna Bassok, and her colleagues at the University of Virginia found that in 1998, 31% of teachers believed that children should learn to read while in kindergarten. In 2010, that number was 80%.

Various initiatives aim to reinject play into children’s increasingly regimented young lives. The Let Grow Project, for example, works with public schools to offer increased opportunities for free, unstructured, child-directed play before and after school. These efforts grant children more freedom and autonomy within an otherwise programmed school day. Parents can work together to launch a Let Grow initiative at their child’s local school.

More money for public schools may not be the answer. More choice and more freedom could lead to improved education outcomes for all children.