The Power of Making Friends with Ideological Enemies

Daryl Davis can be a model for how to change people’s minds.

"How can people hate me, when they don't even know me?"

This is the question that drives the subject of a fantastic new documentary on Netflix called "Accidental Courtesy: Daryl Davis, Race, and America," directed by Matt Ornstein.

For the past 30 years, soul musician Daryl Davis has been traveling the country in search of an answer in the most dangerous way possible for a black man in America: by directly engaging with members the Ku Klux Klan.

He's invited KKK members into his home, he's had countless conversations, and as unlikely as it seems, now considers a number of them to be his friends.

Daryl might say that he's not really even doing anything special besides treating his enemies with respect and kindness in the hopes of actually dissuading them from their hateful views.

Some people now take this approach for even trivial and academic disagreements.

Yet, that's something almost no one else has the courage to do, even when the risks are considerably lower.

Disagreements are stressful and difficult, and the more horrifying someone else’s viewpoint is, the easier it is to dismiss the people who hold those beliefs as inhuman garbage who simply can’t be reasoned with. Social media has also made dehumanizing people considerably easier, as we all get to interact with people from around the world without ever seeing their faces or considering their feelings.

As a result, we live in an increasingly polarized time when a lot of people are saying that the only answer to hate and awful ideas is to meet them with even more hate, more anger, outrage, and even violence.

And it’s not just a problem when dealing with the worst ideas in human history like racial supremacy and fascism. Some people now take this approach for even trivial and academic disagreements.

Don’t like a speaker coming to campus? Silence them and prevent them from getting into the auditorium.

And of course, if you think someone you meet is a white supremacist or a neo-Nazi, the only thing left to do is punch them in the face.

But consider that most of human history is filled with people allowing their disagreements to turn into bloody, horrific warfare; it's only our commitment to dealing with our adversaries peacefully through speech and conversation that has allowed us to become more civilized. So escalating conflicts into violence should be seen as the worst kind of social failure.

And besides, punching people who disagree with you doesn't actually change their minds or anyone else’s, so we're still left with the same deceptively difficult question before and after:

When people believe in wrongheaded or terrible things, how do we actually persuade them to stop believing the bad ideas, and get them to start believing in good ones instead?

Judging by social media, most people seem to believe that it's possible to yell at people or insult and ridicule them until they change their minds. Unfortunately, as cathartic as it feels to let out your anger against awful people, this just isn't an effective strategy to reduce the amount of people who hold awful ideas.

People's amygdalas can actually bypass their rational minds and create a fight-or-flight response when they feel attacked.

In fact, if you do this, your opponents (and even more people who are somewhat sympathetic to their views, or just see themselves as part of the same social group) might actually walk away even more strongly committed to their bad ideas than they were before.

The evidence from psychology is pretty clear on this.

We know from studies conducted by neuroscientists like Joseph LeDoux that people's amygdalas -- the part of the brain that processes raw emotions -- can actually bypass their rational minds and create a fight-or-flight response when they feel threatened or attacked. Psychologist Daniel Goleman called this an "Amygdala Hijack," and it doesn't just apply to physical threats.

People’s entire personal identity is often wrapped up in their political or philosophical beliefs, and a strong verbal attack against those beliefs actually creates a response in the brain of the target similar to a menacing lunge.

Even presenting facts or arguments that directly conflict with people's core beliefs or identities can actually cause people to cling to those beliefs more tightly after they've been presented with contrary evidence. Political scientists like Brendan Nyhan and Jason Reifler have been studying this phenomenon for over 10 years and call it the "Backfire Effect".

And when the people whose minds we desperately need to change are racists and fascists (or socialists and communists, for that matter), a strategy that actually backfires and pushes more people towards those beliefs is the last thing we need.

The good news is that in addition to knowing what doesn't work, we also know a lot about how to talk to people in ways that are actually persuasive -- and the existing research strongly supports Daryl Davis' approach.

In the psychologist Robert Cialdini's book, Influence, he describes what he calls the “Principles of Persuasion.”

Another principle Cialdini describes is the idea of "liking".

It's almost too obvious, but it turns out that if someone likes you personally and believes that you like them, it's easier to convince them that your way of thinking is worth considering.  One easy step towards being liked is to listen to others and find common ground through shared interests. This can be a bridge -- or a shortcut -- to getting other people to see you as a friend or part of their tribe.

Many of those robes now hang in Daryl's closet.

In the film, he connects with several people about music, and you can see these connections paying off -- breaking down barriers and providing many Klan members with a rare (and in some cases only) opportunity to interact with a black man as a human being worth respecting instead of an enemy.

Even better, over time, forming these relationships has had an interesting side-effect.

In the last couple decades alone, over 200 of America's most ardent white supremacists have left the Ku Klux Klan and hung up their robes and hoods for good.

Many of those robes now hang in Daryl's closet.

And in a lot of cases, these individual conversions have much bigger consequences and end multi-generational cycles of bigotry. When a mother or a father leaves the darkness of the Klan, they're also bringing their kids into the light with them. A few of these cases are profiled in “Accidental Courtesy”, and they’re indescribably moving.

Daryl Davis can be a model for how to change people’s minds and with everything that’s going on in the world today, we need successful models now more than ever.

There’s another point to all of this that I think often goes unsaid.

The way to deal with wrong or evil ideas isn't shouting them down or starting a fight.

Unlike Daryl, most of us aren’t actually interacting with KKK members or trying to change people’s minds away from truly evil ideologies, and yet we all fall to the temptation of yelling and name-calling, and using all those techniques of influence that have the opposite of our intended or desired effect.

It’s easy to allow outrage and emotion carry us off into treating other people as inhuman enemies to be crushed rather than human beings to be persuaded.

But if Daryl’s techniques can work to convince die-hard white supremacists that a black man -- and perhaps eventually all black people -- are worthy of respect, imagine how effective they can be when disagreements crop up with your friends, neighbors, and co-workers who don't actually hate you or the things you stand for.

Who knows, if you have more genuine conversations with people outside your bubble, you might even find yourself changing a little bit for the better as well.

“Accidental Courtesy” teaches us that the way to deal with wrong or evil ideas isn't shouting them down or starting a fight; it's having the courage to do what Daryl did and making a friend out of an enemy. 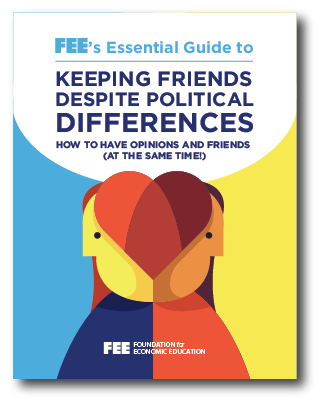 Want to learn how to keep your friends despite your differences? Click here to download our free ebook: FEE's Essential Guide to Keeping Friends Despite Political Differences.