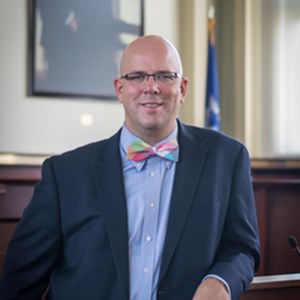 Shawn Bushway is a Professor of Public Administration and Policy at the Rockefeller College of Public Affairs and Policy with a courtesy appointment in the School of Criminal Justice. He is a member of New York State's Permanent Commission on Sentencing Reform, and his primary research interests involve criminal justice policy, the desistance process, and the effect of background check policies on employment for individuals with criminal history records. He is a graduate of the Heinz College of Information Systems and Public Policy at Carnegie Mellon University, which recognized him with its Distinguished Alumni Award in 2017. He received the University at Albany (SUNY) Award for Excellence in Research in 2013, and the State University of New York Chancellor's Award for Excellence in Scholarship in 2014. He was also recognized as a Distinguished Scholar for the American Society of Criminology’s Division on Corrections and Sentencing in 2014, and honored as a Fellow of the American Society of Criminology in 2017.