Why One Economist Abhors Earth Hour

"I refuse to accept the idea that civilization with all its tradeoffs is something to be ashamed of."

We are quickly approaching the annual one-hour event in energy self-flagellation and green nitwittery known as Earth Hour, which takes place tomorrow on Saturday, March 24, at 8:30 p.m (local time). Our friends at Earth Hour are asking people around the world to “set aside an hour to host events, switch off their lights, and make noise for the Earth Hour movement.”

In 2009, Canadian economist Ross McKitrick was asked by a journalist for his thoughts on the importance of Earth Hour. Here is his excellent response on why he “abhors” Earth Hour, reprinted below in its entirety (my emphasis):

Giving women the freedom to work outside the home depended on the availability of electrical appliances that free up time from domestic chores. Getting children out of menial labor and into schools depended on the same thing, as well as the ability to provide safe indoor lighting for reading.

Development and provision of modern health care without electricity is absolutely impossible. The expansion of our food supply, and the promotion of hygiene and nutrition, depended on being able to irrigate fields, cook and refrigerate foods, and have a steady indoor supply of hot water.

Many of the world’s poor suffer brutal environmental conditions in their own homes because of the necessity of cooking over indoor fires that burn twigs and dung. This causes local deforestation and the proliferation of smoke- and parasite-related lung diseases. Anyone who wants to see local conditions improve in the third world should realize the importance of access to cheap electricity from fossil-fuel based power generating stations. After all, that’s how the west developed.

The whole mentality around Earth Hour demonizes electricity. I cannot do that, instead I celebrate it and all that it has provided for humanity. Earth Hour celebrates ignorance, poverty and backwardness. By repudiating the greatest engine of liberation it becomes an hour devoted to anti-humanism. It encourages the sanctimonious gesture of turning off trivial appliances for a trivial amount of time, in deference to some ill-defined abstraction called “the Earth,” all the while hypocritically retaining the real benefits of continuous, reliable electricity.

People who see virtue in doing without electricity should shut off their refrigerator, stove, microwave, computer, water heater, lights, TV and all other appliances for a month, not an hour. And pop down to the cardiac unit at the hospital and shut the power off there too.

I don’t want to go back to nature. Travel to a zone hit by earthquakes, floods and hurricanes to see what it’s like to go back to nature. For humans, living in “nature” meant a short life span marked by violence, disease and ignorance. People who work for the end of poverty and relief from disease are fighting against nature. I hope they leave their lights on.

Here in Ontario, through the use of pollution control technology and advanced engineering, our air quality has dramatically improved since the 1960s, despite the expansion of industry and the power supply.

If, after all this, we are going to take the view that the remaining air emissions outweigh all the benefits of electricity, and that we ought to be shamed into sitting in darkness for an hour, like naughty children who have been caught doing something bad, then we are setting up unspoiled nature as an absolute, transcendent ideal that obliterates all other ethical and humane obligations.

No thanks. I like visiting nature but I don’t want to live there, and I refuse to accept the idea that civilization with all its tradeoffs is something to be ashamed of.

As an alternative to Earth Hour, the Competitive Enterprise Institute (CEI) asks you to instead consider celebrating human progress tonight (Saturday) during its Human Achievement Hour from 8:30–9:30 p.m. According to CEI’s website:

So now you’ve got a choice this Saturday at 8:30 p.m.: Earth Hour or Human Achievement Hour. 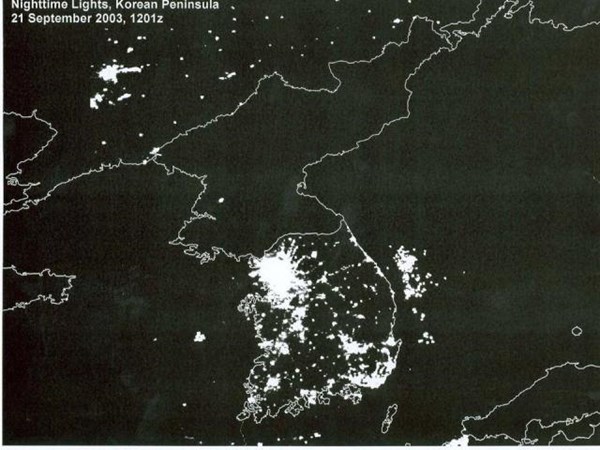 The winner for Earth Hour every year since it started in 2007 has been North Korea (see photo above of the Korean peninsula at night). Odds favor them to be the winner again this year.