Marriage Is Not What It Once Was

Marriage is not what it once was.

Marriage and the family have always been evolving institutions.

FEE contributor Steve Horwitz’s new book, Hayek’s Modern Family, reminds us all that “the use of ‘traditional’ as an adjective for either marriage or the family more generally is … ahistorical.” Marriage and the family, he argues, have always been changing and evolving institutions, and we are mistaken when we take the practices of one period and valorize them, and them alone, as “traditional.”

What is true for the institutions of marriage and the family is also true for the institutions of betrothal and weddings. By now, we all surely know that traditions like the white wedding dress and the diamond engagement ring are late innovations. The white dress came about after Queen Victoria set the fashion when she married Prince Albert. And while rings had been a popular wedding token for a long time, the diamond engagement ring became all the rage only after a successful campaign by DeBeers in the 1930s. But it is not merely the decorative furbelows that are modern innovations. Nearly everything we think of as defining a betrothal and a wedding used to be up for debate. 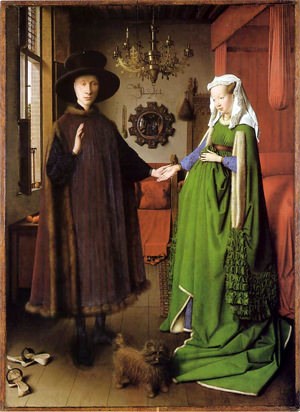 I spent some time recently looking at and discussing Jan van Eyck’s famous painting The Arnolfini Portrait. The painting is probably most often called The Arnolfini Marriage Portrait, though scholars have debated for decades over whether it depicts a wedding, a betrothal, or some other legal ceremony. Others have felt it might simply be a portrait of a married couple, or even a memorial for a wife who died young. We’re not entirely sure.

But in the discussion I was involved in, we thought of the painting as a wedding portrait. Because of that, several of the folks involved were a little startled to see the woman looking decidedly pregnant. (In much the same way that we don’t really know the occasion for the portrait, we don’t really know that the woman is pregnant. The style of her dress may just make her appear to be. But to a modern eye, she looks at least seven months along.) Was van Eyck making a moral judgment on the sexual morality of this couple — depicting them as newly married, but with a pregnancy that far advanced? Or is her pregnancy an argument against the notion that this is a wedding portrait, since 15th century morality would not have allowed for premarital sex and pregnancy? What kind of wedding portrait was this, exactly?

As the historian Lawrence Stone points out in his book The Family, Sex, and Marriage,

Before 1754 there were still numerous ways of entering into [marriage]. For persons of property it involved a series of distinct steps. The first was a written legal contract between the parents concerning the financial arrangements. The second was the spousals (also called a contract), the formal exchange, usually before witnesses, of oral promises. The third step was the public proclamation of banns in church, three times, the purpose of which was to allow claims of pre-contract to be heard.… The fourth step was the wedding in church, in which mutual consent was publicly verified, and the union received the formal blessing of the Church. The fifth and final step was the sexual consummation.

While parts of the process Stone describes are a little antiquated, they don’t seem completely unfamiliar. And the whole thing sounds remarkably orderly — though it is worth noting that wealthier couples found ways to evade the more tedious parts of the process, such as the triple proclamation of banns, by buying a special license. But the apparent orderliness and familiarity of the process falls apart rapidly when we look just a little more closely.

Stone continues, “But it cannot be emphasized too strongly that according to ecclesiastical law the spousals was as legally binding a contract as the church wedding.… Any sort of exchange of promises before witnesses which was followed by cohabitation was regarded in law as a valid marriage.”

Nearly everything we think of as defining a betrothal and a wedding used to be up for debate.

Marriage required no certification by the church or the state. Two individuals merely promised to marry one another in front of witnesses, and then lived together. That was sufficient. And sex and pregnancy in the months between the spousals and a church wedding, if one ever got around to having a church wedding, were routine and accepted.

This sounds like an ideal situation from a libertarian perspective. It’s certainly how I’d prefer that marriages take place. But things soon got even more complicated.

After the Reformation, the Catholic Church required the presence of a priest for a wedding to be valid. The Anglicans did not, though a church wedding came to be expected. However, lawyers still recognized the spousals as valid. And they distinguished between two kinds of spousals — one was not followed by consummation and could be broken. The other was followed by consummation and was binding for life.

Stone reminds us of a few other complexities.

The canons of 1604 stipulated that a church wedding must take place between the hours of 8 am and noon in the church at the place of residence of one of the pair, after the banns had been read for three weeks running. Marriages performed at night, in secular places like inns or private houses, or in towns or villages remote from the place of residence … were now declared illegal [but] they were nonetheless valid and binding for life. This was a paradox the laity found hard to understand.

This problem is a key part of Shakespeare’s play Measure for Measure, which begins with the arrest of Claudio for fornication with Juliette. Claudio is shocked to be accused of the crime, because, as he says:

… she is fast my wife
Save that we do the denunciation lack
Of outward order.

But with the exacting Angelo now in charge of the city, the more rigorous definition of a legal marriage is being enforced, and Claudio is in trouble.

The attempt to codify and enforce a well-understood and long-standing traditional practice made that practice so complicated that it was incomprehensible and often made criminals out of well-intentioned and honest individuals. (Those who are thinking about the mess that is the discussion of bathroom laws in North Carolina may find that problem familiar.)

There’s little doubt now about who is married and who is not married. The United States has spent years in a painful debate over that question, but we finally do have legal clarity. But as two dear friends of mine head down the aisle this month and I listen to the complications and fees they are facing over the licensing of their marriage and their officiant, I do wonder if we’ve solved anything since the days of spousals contracted in front of witnesses or if we’ve just piled on unnecessary layers of legal complications, forms, and fees.