Why is LASIK so cheap?

Fallon claims to have conspired with T-Swift’s mother to capture video of America’s favorite pop princess while she was on some “pretty hardcore” pain pills—as she calls them—following her corrective surgery. The late-night talk show host then surprised an unexpecting Tay-Tay and viewers by showing the footage during her latest appearance on his show.

The video, now making its rounds on the interwebs, shows Swift trying to eat a banana while lamenting that she didn’t pick the “right” one from the bunch. And in case you were wondering, it’s just as hilarious as it sounds.

While the singer acted shocked and understandably embarrassed by the video being shown to millions of viewers, some are wondering if this was genuine or if it was, perhaps, a staged publicity stunt. Though, to be sure, Swift does look pretty mortified when she figures out what Fallon has planned.

But whether this was truly a candid moment caught on camera or simply a genius PR move by Tay and Fallon’s teams, fans everywhere can’t seem to get enough of “loopy Taylor.”

Hilarity aside, however, Taylor’s recent procedure can actually teach us a lot about medical care costs and—spoiler alert—LASIK eye surgery isn’t just for the mega-wealthy like Taylor Swift, and the reasons might surprise you.

LASIK Is Getting Less Expensive

If I were to ask you which procedure cost less: LASIK or an appendectomy—the removal of one’s appendix—you might be shocked by the answer.

For most patients, LASIK corrective eye surgery is a cost that comes completely out of their own pockets, which may lead some into thinking you have to have Taylor’s kind of money in order to afford it. But the truth is, even though other procedures, like an appendectomy, are covered by your insurance provider, LASIK is actually far less expensive.

While a burst appendix can be deadly, in most cases, LASIK eye surgery is not medically necessary. In fact, most patients opting to correct their vision via laser choose to do so simply because they want to ditch their contacts and glasses. For this reason, LASIK is considered a cosmetic procedure, like plastic surgery, which is why insurance plans generally won’t cover the costs.

This seems to make sense, but it still doesn’t answer the question of why LASIK costs so much less than a surgery that could potentially save a person’s life, especially when the latter is covered by health insurance providers.

Contrary to what you may have heard, LASIK is so affordable precisely because it is not covered by insurance.

If this sounds a little off, don’t worry, I’ll explain. But first, here’s a little insight into how these costs compare with each other.

According to CBS news, the average cost of an appendectomy in 2014 ranged anywhere from $1,500 all the way up to $180,000. That same year, a Reddit user made headlines after he posted his $55,000 bill for his emergency appendectomy, shocking readers by just how burdensome health care costs have become.

Unfortunately, this tale is all too common and it has been getting worse over the years.

Between the late 1990s and 2016, the cost of hospital and related services in the US rose by more than 177 percent. This has sparked concern, and rightfully so, that too many Americans are going without care due to skyrocketing costs.

The cost of LASIK surgery, on the other hand, has dropped by 44 percent over the years. In 1998, when LASIK was becoming more common in the US, it cost a patient about $2,500 per eye. Adjusted for inflation, that would be about $4,000 per eye in today’s economy.

In 2019, the cost of LASIK surgery performed in the US is about $2,246 per eye. In 2018, that cost was lower, at around $2,199 per eye, but when we compare this slight increase to the 177 percent increase across the board on health care costs, it’s clear to see that whatever model LASIK has adopted is working.

But LASIK isn’t the only procedure defying the rest of the country’s medical care trends. Cosmetic surgery, in general, has become more affordable, while other medical procedures have gone up. Even with procedures that have increased in price, the increases are far more modest than the staggering increases in more standard medical and hospital services. If there is any doubt about this, just look at the chart. 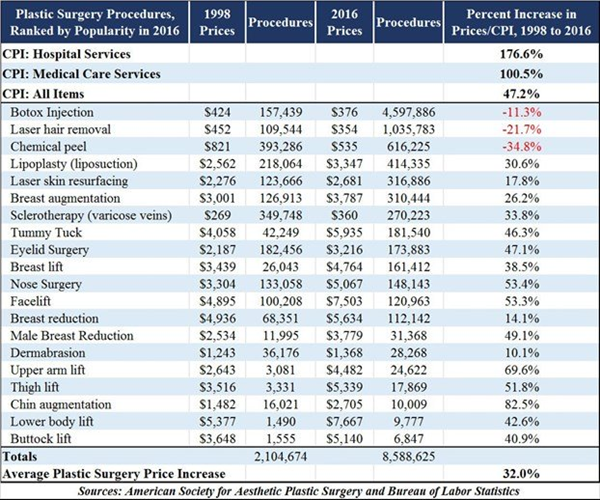 While regular health care costs continue to rise, politicians, policymakers, and health care providers have tried to figure out what can be done to correct this problem in order to make this vital industry more affordable for Americans. But most have not been looking for solutions in the right places.

What in the World Is Going On?

When we think of lowering the costs of medical care, the conversation always seems to turn to expanding health insurance coverage. Watch any debate from this election cycle and you will see candidates, each with their heart in the right place, passionately arguing for better insurance plans.

But unfortunately, no matter how well-intentioned policy like Obamacare has been, it still didn’t help lower costs. In fact, many policy premiums increased and many previously-insured people lost coverage.

But what if health insurance has actually been contributing to the problem of skyrocketing costs?

A primary reason that costs of medical care have risen so steeply since 1998 is because third parties, like Medicaid, Medicare, private health insurance, Veterans Affairs, etc., now pay a large share of these costs. Since the actual patients are not footing the bill, many have no idea how much a procedure actually costs.

If I were to ask you how much it costs to set a broken bone, many would have to call their insurance providers in order to get this information. Even then, most would be given their cost after their plan pays the doctor, and not the total cost. And since patients are not paying out-of-pocket, most don’t even shop around before deciding where to go.

When you buy a car, you wouldn’t just buy from the first lot you visit. Instead, you would shop around to get the best possible deal to ensure you’re not overpaying. The same is true of cosmetic surgeries, like LASIK, and even plastic surgery like liposuction.

Since many insurance companies and other third parties don’t cover cosmetic procedures, patients are responsible for calling different doctors to see who has the best prices. They also have to check reviews on sites like YELP or Google to ensure that they are also receiving quality care.

Yet, we don’t do this with most health care procedures. But it’s the way things used to be done.

In 1960, nearly 48 percent of health care costs were paid out of pocket, which explains why costs were lower—patients had a vested interest in making sure they got the best deal. In 1990, that number fell to 19 percent and in 2015, it fell to 10.5 percent. 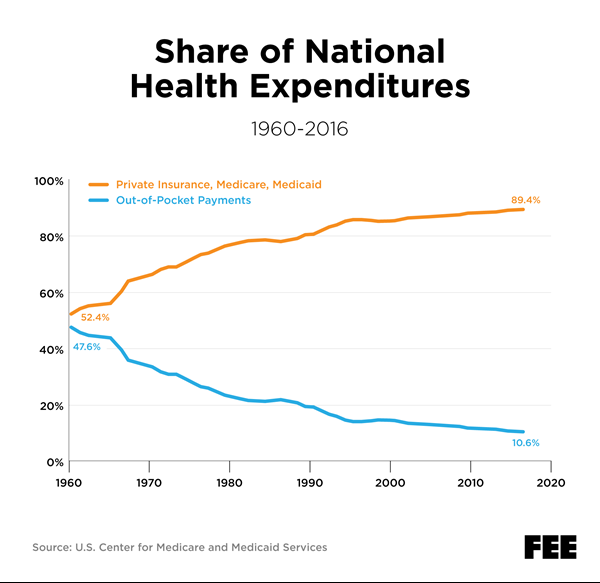 As more and more people rely on third parties to deal with the costs of care, and then bill them for their share, we no longer have a reason to shop around for the best quality and lowest prices.

Additionally, since health care providers know that insurance companies are going to pay for whatever services are considered “in-network,” they have less of a reason to keep costs down in order to compete with other providers.

As cosmetic surgery has shown us, when patients take a more active role in their medical care choices, costs of care go down.

You and I might not be worth $360 million like Tay-Tay, but that doesn’t mean we can’t afford the same quality of care. And if this can happen in cosmetic surgery, imagine what it could do for broader health care procedures. Just remember if you find yourself acting loopy after a procedure and are hungry for a banana, make sure it’s not being recorded.