Vancouver Popped Its Own Housing Bubble

Vancouver has a housing problem.

The problem is that its housing prices have been rising at preposterous rates in recent years. This chart from Zero Hedge tells you most of what you need to know. (Things took a sharp turn down this past month; we’ll get there shortly.) 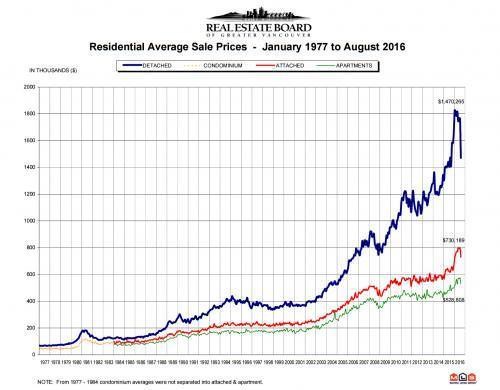 Part of the price increases is surely due to natural factors – Vancouver, BC is a major metropolitan area and is routinely ranked as one of the most desirable cities to live in. Thus, more people probably want to move to Vancouver than leave it, and that puts some upward pressure on prices. Additionally, loose monetary policies around the globe have created bubbles in many asset classes, and likely contribute to the Vancouver price hikes as well.

But while this explains some of the increases, many observers see foreign investors as the primary cause. Reportedly, many of these investors are from China. Given the troubling signs of weakness in the Chinese economy in recent years, it appears that many well-to-do Chinese investors have sought out Canadian real estate as a safe asset in a more financially stable country.

In fact, the concern about foreign investor demand jacking up home prices has already led the government in Vancouver to take action. In August, they implemented a 15% tax on any foreigner’s purchase of real estate. This policy appears to have been very effective at its stated goal, for better or worse. Demand for Vancouver real estate appears to have evaporated almost immediately – resulting in the steep drop seen in the chart above.

Why not just tax people for holding unoccupied properties to force them to rent them out? What could be easier?

All of that catches you up to the present. Housing prices are plummeting, but the rent is still too darn high, at least for the government’s liking. And here again, foreign investors are taking the blame.

The idea is that many people bought Vancouver properties as investments, but are not actually occupying them or renting them out. Rather, the properties function more as a vacation property at the moment. This reduces the supply of available rentals in the city and would help drive up rent prices, all things equal.

Thus, the government has proposed a new solution to punish the investors anew: a 2% tax on vacant properties.

Like most bad economic policies, this one appears to make sense at first glance. As the story goes, the problem is caused by a bunch of owned but unoccupied properties in the city. So why not just tax people for holding unoccupied properties to force them to rent them out? What could be easier?

The flaw in this line of thinking is that it only considers the short-term effects of the policy, without accounting for the unintended long-term consequences.

In the short-term, a vacancy tax may indeed encourage more property owners to rent out their properties. And it might also convince existing landlords to accept lower rent payments, now that having a vacant property is that much more expensive.

The short-term effect will probably increase rental unit supply and lead to lower rents, as intended.

Rent prices will soar and this time they will be even harder to solve since the government has discouraged new housing development with the vacancy tax.

But notice what else is happening here. A tax on vacant properties is going to make owning and renting out residential properties much less profitable.

Most of us probably won’t shed a tear if our own landlord happens to lose money next month. I certainly won’t.

However, if all landlords are beginning to make less money or even suffer losses, that is going to be a big problem in the longer term. Let’s trace through these effects.

Lower profits in the residential rental business means that fewer companies and investors will want to participate. In turn, this means there will be less construction of new rental houses and apartment complexes – fewer investors will choose to invest in the heavily taxed rental real estate market when they can pursue other business opportunities instead. This means that relatively little new housing will be built, and in the case of Vancouver, it probably won’t keep pace with the influx of people to the city.

And finally, we end up back where we started. There will be too little supply and too much demand. Rent prices will be soaring again, but this time they will be even harder to solve since the government has actively discouraged new housing development with the vacancy tax.

So we see that although the vacancy tax could possibly reduce rent prices in the short-run, it sows the seeds for even higher rent prices in the long run by distorting the market. It will end up exacerbating the very problem it intends to solve – which frankly, is a good description of most government policies.