U.S. Colleges Have the Second Highest Per Pupil Spending in the World

As college students head back to campus for the new academic year, high tuition levels will doubtless be on everyone’s minds. The rising price of college has led progressives to call for a more European-style higher education system where the government picks up a bigger share of the bill for college.

The US Spends a Lot of Money on College Students

But a new data release from the Organisation for Economic Co-operation and Development (OECD), a research organization, shows that the high price of college in America isn’t necessarily due to insufficient state support. Rather, the problem is more fundamental. Tuition is high in America because American colleges spend more per student than almost every other country in the developed world. 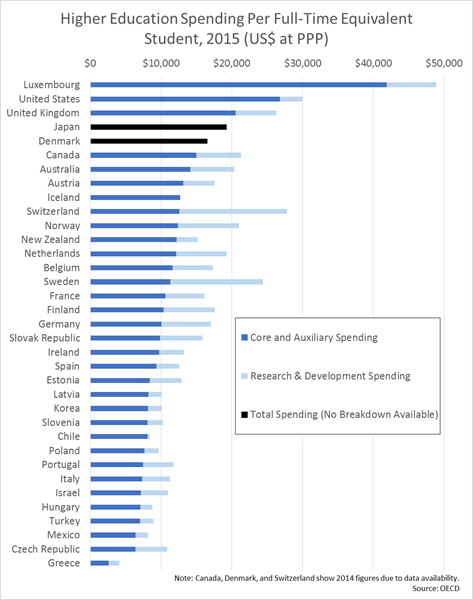 The American higher education system splashes out nearly $27,000 per student on core and auxiliary educational services. This figure includes spending on instruction, administration, and ancillary services such as dormitories and dining halls. Another $3,000 per student goes to research and development spending. Only tiny Luxembourg, an affluent grand duchy in Western Europe, spends more per college student than the United States.

America maintains its second-place ranking regardless of whether one looks only at core education spending or all college spending, including research. In third place is the United Kingdom, where universities spend $21,000 per student on core and auxiliary expenditures—and where high tuition is also a common complaint.

More Government Spending Is Not the Answer

The United States could take steps to promote competition and greater efficiency in the higher education sector.

It is true that in many European countries, governments shoulder a greater share of the cost of higher education. But colleges in high-subsidy nations such as Norway and Finland must generally accept a far lower level of expenditure per student even though those countries’ tax rates are much higher than America’s.

America might be able to lower college tuition through greater public subsidies, but other countries’ experiences suggest that the government would have to force colleges to reduce their underlying costs to make such a scheme work without bankrupting the national purse. Alternatively, the United States could take steps to promote competition and greater efficiency in the higher education sector, harnessing the power of market discipline to bring tuition prices back to earth. The common denominator in both of these approaches is lower spending.

This article has been reprinted with permission from the American Enterprise Institute.