Ridesharing Is Accomplishing What Decades of Policy Papers Failed to Achieve 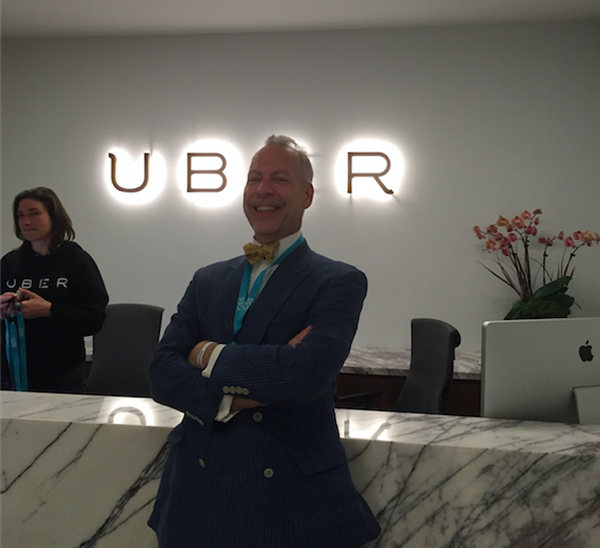 Standing in the back of the main programming room at Uber headquarters, one looks across hundreds of focused employees with open browsers. They are following requests and rides in hundreds of cities around the world. The people making deals are connecting peer to peer. But there’s still more work to do. Uber employees are observing traffic flows, tweaking pricing, troubleshooting, testing new features, fixing issues, monitoring bandwidth, approving new drivers, and taking other actions to keep this five-year-old company growing.

Every driver needs a rider. Every rider needs a driver. Uber is there to make the connections in the most efficient way possible — and in a way that ensures everyone wins.

It’s a quiet office with a variety of open work spaces. The desks are six feet wide and pushed together in groups of three. Most employees use large-screen iMacs, with backup laptops that can be moved around to other work areas such as small conference spaces and even small cubbies cut into walls.

As you move through the office, you come across floor-to-ceiling screens with beautiful images of Uber traffic in cities around the world.

There is a low hum in the room, and most people speak softly. The work doesn’t seem grueling, but neither do you see displays of that wild-and-crazy eccentricity sometimes associated with edgy startups. Rather, the work just seems focused and intense, almost mission driven.

Most remarkable to me has been the politics of this peaceful revolution.

If you didn’t understand the political dynamics of what is happening here, you would entirely miss the awesome human drama that all this code is making possible. What’s happening is this: these people, quietly typing on their keyboards, are systematically smashing 100-year-old monopolies all over the world, one ride at a time.

I wondered if the employees themselves understood the significance. After all, economists have been railing against municipal taxi monopolies for decades. These cartels lack any justification. They are such a clear case of cronyism: a tiny group of drivers lobbies for a government privilege, and the overages are pushed into the pockets of the politicians who grant the privilege.

It’s a feudalistic system. There was a time when most industries worked this way — until the liberal revolution of the 18th century dismantled monopolies in favor of competition. But most modern cities brought back the old way, with their taxi monopolies that drive up prices, provide subpar service, and shut out many providers and consumers that would otherwise be thrilled to jump in and do business.

Position papers against taxi monopolies have been pumped out of think tanks for decades. Thousands of op-eds have decried the corruption and the poor service. But no amount of rational argument worked. The interest groups that have benefited from the system have had a lock on the political structures. The whole thing is preposterous and yet persistent (a remark that could apply to so many government programs).

Then came Uber. First there was incredulity: this will never work. Then came the surprise that it was happening. Then came the panic. Then protests. More recently, we’ve seen signs of acquiescence, as governments around the world come to terms with the reality they had long dreaded: riders and drivers absolutely love the new way of finding each other.

In a reversal of traditional “public choice” dynamics, the benefits of competition are diffused throughout the city, while the costs of cracking down and stopping it are concentrated. That gives Uber an advantage over the status quo.

In the end, the Uber idea is simple. Drivers sign up. Riders let it be known they need a ride. Uber facilitates the deal and the monetary transaction. It’s something that could never happen but for the economy of mobile applications. These and the ubiquity of smartphones are what make it possible for riders to communicate with drivers without waving their arms on the street and hoping the right person comes by.

The mobile app also allows for careful monitoring of quality. Riders rate drivers. Drivers rate riders. Both have a strong incentive to make the experience as good as possible, in hopes of repeating it again.

Reduced drunk driving fatalities, reduced congestion on the streets, new uses for carpooling, new jobs — the spillover benefits should have been predictable, but no one predicted them.

Most remarkable to me has been the politics of this peaceful revolution. It has turned consumers into activists for transportation competition. Their voices in support of peer-to-peer ridesharing services have been so loud and intense that political establishments have had to back down. In other cases, where there are active markets for taxi medallions, the market has dealt the final blown by dramatically reducing the cartels’ prices.

Rarely in modern times has a company been so aggressive and daring in dealing with the presence of government regulations. Uber moves into cities by stealth. A driver wants to drive. Fine. A customer wants a ride, and the driver agrees. More drivers sign up. The only way you would really know this is going on is to download the app and observe the cars in your vicinity.

Last year in Wichita, Kansas, I asked the clerk in a large downtown hotel if they had Uber in town. She said no, but she could call a cab that would take no longer than 30 minutes to show up. Just to make sure, I pulled up my app, only to find four Uber drivers within a square mile of where I was standing. I clicked a button and got in the car. The hotel clerk never figured out what happened.

Everyone has their own Uber stories to tell, but my personal favorites involve the many times that I’ve used ridesharing to outwit the preposterous restrictions at airports around the world. There are signs everywhere: use only authorized drivers. Accept no rides from a person who approaches you. Only use official dispatchers.

But, in the end, not even the highest airport security can stop passenger pickup from good friends. And Uber drivers and passengers think of themselves this way. I click the app and call the driver to arrange a good spot, just as you would with a friend or family member. It works every time, and there’s a wonderful sense of delight that comes with doing something peaceful that gets around systems of monopoly that are ultimately imposed by force.

I asked an employee at Uber whether people there think of themselves as political revolutionaries. He said absolutely not. They are tech-minded civil rights activists. They are enabling people who have value to add to each other’s lives to find each other and cooperate.

In the end, that’s what free-market activism is all about. Even so, the way it is happening is something of a surprise. Ten years ago, I never would have imagined that a team of programmers in a small San Francisco office would be bringing down entrenched and powerful government monopolies in New York, Moscow, Beijing, and hundreds of other cities around the world.