Often, critics of tax cuts tell readers that the policy is not for “them,” the working class. A July Vox article depicts this stance very clearly:

...the Institute on Taxation and Economic and Policy, a liberal-leaning think tank, found that from 2001 through 2018, changes to the federal tax code have reduced revenue by $5.1 trillion. Sixty-five percent of the savings have gone to the richest fifth of Americans, with 22 percent of them going exclusively to the top 1 percent.

According to the institute’s estimates, by 2025 the tax cuts will grow to $10.6 trillion. Of that amount, almost $2 trillion will be received by the wealthiest 1 percent of Americans.

“If you look at the richest 1 percent, they’re getting more than the bottom 60 percent of Americans,” Steve Wamhoff, director of federal tax policy at the institute and co-author of the report, told Vox.

But crucial facts are often missing in these articles. As a recent Bloomberg piece explained, two key points tend to be overlooked in articles written by media outlets and progressive tax proponents:

These data show that the bottom 50 percent of US taxpayers paid just 3 percent of total income taxes in 2016, while the top 50 percent accounted for 97 percent.

Here is a wonderful visual representation of this dynamic, courtesy of Mark Perry of the American Enterprise Institute: 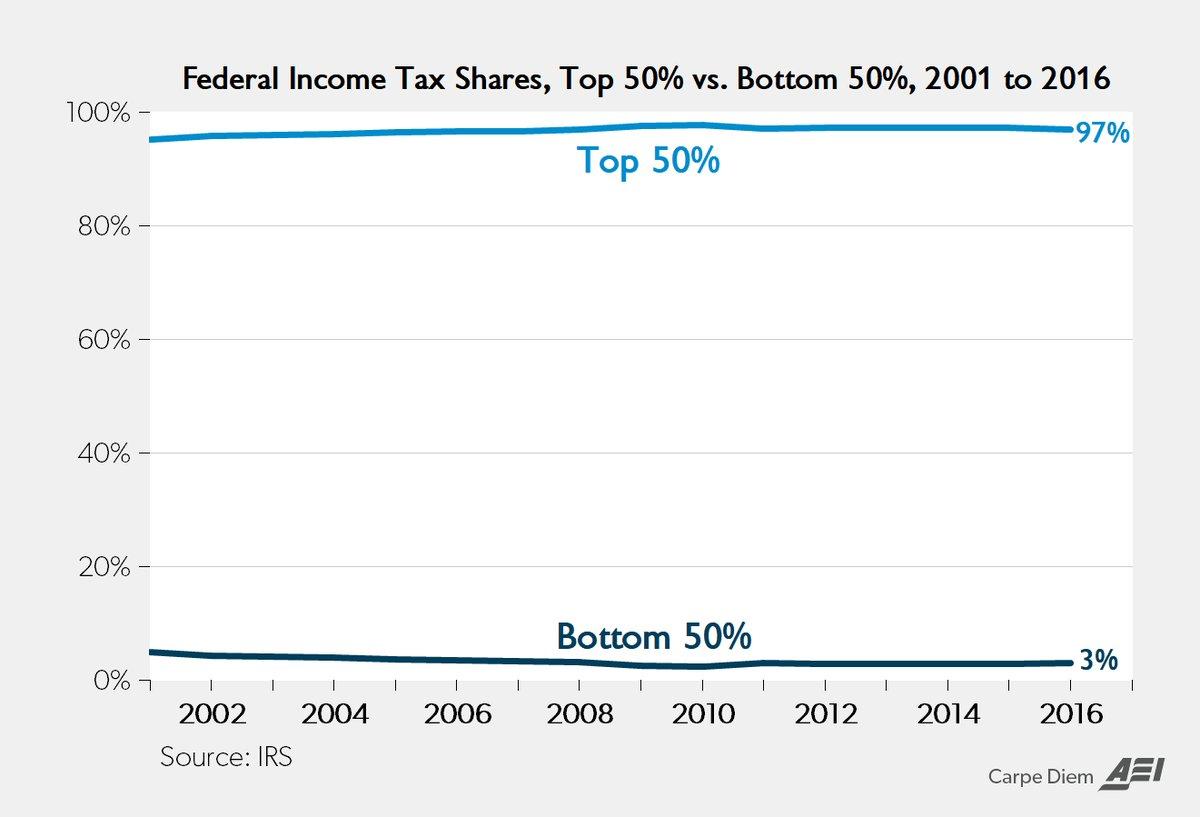 Economist Dan Mitchell explains it best: Heavy taxation destroys entrepreneurship. The more money is taxed out of the private sector, the less is available for investment, development, and worker compensation (recall that after Trump’s tax bill was enacted, many businesses raised workers’ wages and offered bonuses).

Efforts to improve America’s tax climate are consistently and predictably derided as tax cuts for “the rich.” But, as the above diagram shows, it’s quite impossible to offer people a comparatively huge tax cut when they’re paying a comparatively tiny percentage of income taxes.

Tax data show that the richest 1,409 American taxpayers paid more than the bottom 70 million. (So if you're looking for a utilitarian reason to not eat the rich, in addition to the moral one, there you go.)

Rebecca is a freelance editor and ghostwriter. After two years of traveling the world, she recently settled in Atlanta, Georgia, where she worked for FEE and for MoneyCrashers.com as an associate editor, and for Thanet publishing as a ghostwriter.