There's Only One Way to Drain the Swamp

The only way to “drain the swamp” is to shrink the size and scope of government.

If you ask what worries me about the incoming Trump Administration, I’ll immediately point to a bunch of policy issues.

Others, though, are more focused on whether Trump’s business empire will distort decisions in the White House.

…he’s already giving us an object lesson in what real conflicts of interest look like, as authoritarian governments around the world shower favors on his business empire. Of course, Donald Trump could be rejecting these favors and separating himself and his family from his hotels and so on. But he isn’t. In fact, he’s openly using his position to drum up business. …The question you need to ask is why this matters. …America is a very rich country, whose government spends more than $4 trillion a year, so even large-scale looting amounts to rounding error. What’s important is not the money that sticks to the fingers of the inner circle, but what they do to get that money, and the bad policy that results. …what’s truly scary is the potential impact of corruption on foreign policy. …someplace like Vladimir Putin’s Russia can easily funnel vast sums to the man at the top… So how bad will the effects of Trump-era corruption be? The best guess is, worse than you can possibly imagine.

I’m tempted to ask why Krugman wasn’t similarly worried about corruption over the past eight years. Was he fretting about Solyndra-type scams? About the pay-to-play antics at the Clinton Foundation? About Operation Choke Point and arbitrary denial of financial services to law-abiding citizens?

He seems to think that the problem of malfeasance only exists when his team isn’t in power. But that’s totally backwards. As I wrote back in 2010, people should be especially concerned and vigilant when their party holds power. It’s not just common sense. It should be a moral obligation.

But even if Krugman is a hypocrite, that doesn’t mean he’s wrong. At least not in this case. He is absolutely on the mark when he frets about the “incentives” for massive looting by Trump and his allies. 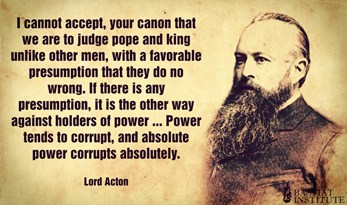 And as Lord Acton famously warned, power is very tempting and very corrupting.

Which is why I’m hoping that Krugman will read John Stossel’s new column for Reason. In the piece, John correctly points out that the only way to “drain the swamp” is to shrink the size and scope of government.

…today’s complex government allows the politically connected to corrupt… most everything. …In the swamp, no one but taxpayers pays for their mistakes. …it’s well worth it for companies to invest in lobbyists and fixers who dive into the swamp to extract subsidies.For taxpayers? Not so much. While the benefits to lobbyists are concentrated, taxpayer costs are diffuse. …Draining the swamp would mean not just taking freebies away from corporations—or needy citizens—but eliminating complex handouts like Obamacare. Candidate Trump said he would repeal Obamacare. Will he? He’s already backed off of that promise, saying he likes two parts of the law—the most expensive parts.

As you can see, Stossel understands “public choice” and recognizes that making government smaller is the only sure-fire way of reducing public corruption.

Which is music to my ears, for obvious reasons.

By the way, the same problem exists in many other countries and this connects to the controversies about Trump and his business dealings. Many of the stories about potential misbehavior during a Trump Administration focus on whether the President will adjust American policy in exchange for permits and other favors from foreign governments.

But that temptation wouldn’t exist if entrepreneurs didn’t need to get permission from bureaucrats before building things such as hotels and golf courses. In other words, if more nations copied Singapore and New Zealand, there wouldn’t be much reason to worry whether the new president was willing to swap policy for permits.