Another case of government distorting the market

The drug Daraprim was increased in price from $13.60 to $750, creating social outrage. I’ve been busy, but a few points are worth mentioning.

The drug is a generic and not under patent so this isn’t a case of IP protectionism. The story as I read it is that Martin Shkreli, the controversial CEO of Turing pharmaceuticals, noticed that there was only one producer of Daraprim in the United States and, knowing that it’s costly to obtain even an abbreviated FDA approval to sell a generic drug, saw that he could greatly increase the price. 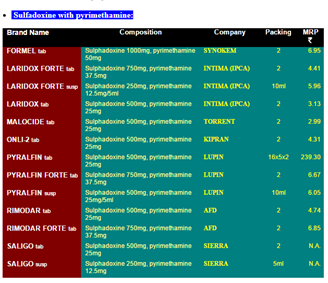 It’s easy to see that this issue is almost entirely about the difficulty of obtaining generic drug approval in the United States because there are many suppliers in India, and prices are incredibly cheap.

The prices in this list (right) are in India rupees. 7 rupees is about 10 cents so the list is telling us that a single pill costs about 5 cents in India compared to $750 in the United States!

It is true that there are real issues with the quality of Indian generics. But Pyrimethamine is also widely available in Europe. I’ve long argued for reciprocity: if a drug is approved in Europe it ought to be approved here. In this case, the logic is absurdly strong. The drug is already approved here!

All that we would be doing is allowing import of any generic approved as such in Europe to be sold in the United States.

Note that this in not a case of reimportation of a patented pharmaceutical for which there are real questions about the effect on innovation.

Allowing importation of any generic approved for sale in Europe would also solve the issue of so-called closed distribution.

There is no reason why the United States cannot have as vigorous a market in generic pharmaceuticals as does India.