In a new Reason video, John Stossel tackled the issue of income inequality.

I wish my leftist friends understood the Laffer Curve. I also wish they understood the downsides of artificially low interest rates. And the Rahn Curve. And comparative advantage.

The Economy is Not a Zero-Sum Game

But perhaps more than anything else, I wish they understood that poor people aren’t poor simply because rich people are rich.

John Stossel has a new video from Reason about the issue.

John is right about income growth. That’s why I think it’s so important to have policies that enable more growth. When the economy does well, that’s good for the poor, good for the rich, and good for the rest of us as well.

And this position is certainly supported by the historical data. 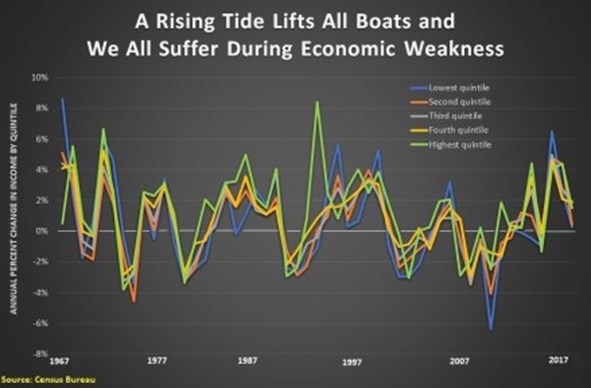 Heck, poor Americans are rich compared to people in many developing nations.

I also like what John said about income mobility. People can rise out of poverty. And they can fall out of prosperity.

By the way, I wish the discussion about unfairness also mentioned height and looks. There’s fairly solid academic evidence that taller people and better-looking people earn more money and have better lives.

I wish people understood that disapproval of things such as drug use, gambling, and prostitution doesn’t mean those activities should be illegal.

Yet not even Bernie Sanders or AOC has proposed taxes to equalize those sources of real unfairness (since I don’t want to give them any ideas, hopefully they don’t read my columns).

P.S. I started today’s column by giving examples of things I wish leftists understood. Well, there are also issues where I wish my friends on the right had more insight. For instance, I would like them to understand that tax cuts very rarely pay for themselves. I wish they realized that spending caps are far preferable to balanced budget rules. And I wish they understood that disapproval of things such as drug use, gambling, and prostitution doesn’t mean those activities should be illegal.

P.P.S. I also mentioned at the start of the column that higher incomes for some people doesn’t imply lower incomes for other people. I should have included the caveat that this isn’t true if government is tilting the playing field. Bailouts, protectionism, subsidies, and other forms of cronyism enable the politically well-connected to prosper at the expense of everyone else.