The situation is more complicated than reporters suggest.

"Exhibit A" is usually the fact that homicides have decreased in Australia since 1996 when the new legislation was adopted in Australia.

There are at least two problems with these claims. First, homicide rates have been in decline throughout western Europe, Canada, and the United States since the early 1990s. The fact that the same trend was followed in Australia is hardly evidence of a revolutionary achievement. Second, homicides were already so unusual in Australia, even before the 1996 legislation, that few lessons can be learned from slight movements either up or down in homicide rates.

A Trend in Falling Rates

There is now general agreement, at least for developed English-speaking countries and western Europe, that homicide patterns have moved in parallel since the 1950s. The precise timing of the declines has varied, but the common pattern is apparent. Homicide rates increased substantially from various dates in the 1960s, peaked in the early 1990s or slightly later, and have since fallen substantially.

This was certainly the case in the United States. US homicides hit a 51-year low in 2014, falling to a level not seen since 1963. This followed the general trend: peaking in the early 1990s and then going into steep decline. And yet, we can't point to any new national gun control measure that we can then claim caused the decline. In fact, the data suggests gun ownership increased significantly during this period. 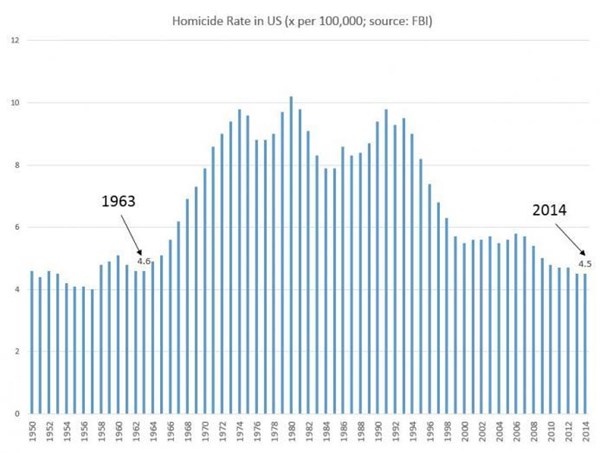 Australia followed the same pattern, although national homicide data collection was spotty before the early 1990s:

Part of the reason that the collection of homicide data in Australia is so recent a phenomenon is because it has tended to be so rare. Politically, it simply wasn't a national priority. Australia is a small country, with only a few more million people than Florida spread out over an entire continent. In the relatively high homicide days of the early 1990s, Australia's homicides totaled around 300. This means in a bad crime year, in which homicides increase by only 20 or 30 victims, it could swing overall rates noticeably.

This brings us to our other problem with using post-1996 homicide data as definitive proof of anything. The numbers are too small to allow us to extrapolate much. As data analyst Leah Libresco wrote in 2017 in The Washington Post:

I researched the strictly tightened gun laws in Britain and Australia and concluded that they didn’t prove much about what America’s policy should be. Neither nation experienced drops in mass shootings or other gun related-crime that could be attributed to their buybacks and bans. Mass shootings were too rare in Australia for their absence after the buyback program to be clear evidence of progress. And in both Australia and Britain, the gun restrictions had an ambiguous effect on other gun-related crimes or deaths...

This doesn't stop many reporters for mainstream outlets from claiming that any decline in homicides can with certainty be attributed to whatever the most recent gun control restrictions were.

But it rarely works in the opposite direction. For example, during the 1990s, many American states liberalized gun laws considerably, allowing more concealed carry provisions and lessening controls in general. Needless to say, The New York Times doesn't point to this and say "American homicide rates decreased in response to loosening of state gun laws."

Of course, I'm not saying that these changes in gun laws by themselves indisputably "prove" that more concealed carry laws reduce homicides. But if I subscribed to the same standards of rigor as most mainstream journalists, I'd likely have no scruples about doing this in spite of what other factors ought to be considered.

Faced with a lack of evidence that the 1996 law caused Australia to follow the same trend in homicides as both the US and Canada, advocates for laws like Australia's then fall back on the strategy of pointing out that Australia's homicide rates are lower than the US's. The problem with this strategy, of course, is that Australia's homicide rates were not comparable to those in the US either before or after 1996. The causes of the difference in rates between the two countries obviously pre-date modern gun regulation measures in both countries. (We might also point out that several US states—some of which have very lax gun laws—have very low homicide rates comparable to Australia's.)

Attempts to explain this away have been numerous, and in many ways, justifying gun control policy has come down to endless attempts at using regression analysis to find correlations between gun policy and homicide rates. These can often be interesting, but their value often rests on finding the right theoretical framework with which to identify the most important factors.

Those who work in public policy and who lack a good foundation in broader issues around criminality tend to just go directly to legal prohibitions as the key factor in homicide rates. But this isn't exactly the approach taken by those who engage in more serious study of long-term trends in homicides.

Famed crime researcher Eric Monkonnen, for example, in his essay "Homicide: Explaining America's Exceptionalism," identified four factors he thought most likely explained the higher rates in the United States: the mobility of the population, decentralized law enforcement, racial division caused by slavery, and a generally higher tolerance for homicide. Monkonnen concludes: "To assume that an absence of guns in the United States would bring about parity with Europe is wrong. For the past two centuries, even without guns, American rates would likely have still been higher."

Monkonnen's conclusions on this matter don't necessarily make him laissez-faire on gun control. But they do illustrate his recognition of the fact that factors driving differences in homicide rates between two very different societies go far beyond pointing to one or two pieces of legislation. And if gun control laws are to be posited as the cause of declines in homicide, there needs to be a clear "before and after difference" in the jurisdiction in which they are adopted. Comparisons with other countries miss the point.

Suicide Rates Are Back at Pre-1996 Levels

Perhaps recognizing that homicide rates haven't actually changed all that much in the wake of 1996, some defenders of Australia's gun legislation have tried to gild the lily by claiming that an additional benefit of legislation has been a decline in suicide rates. This is a common strategy among gun control advocates who often like to claim gun control is a suicide prevention measure.

For example, it's not difficult to find media headlines proclaiming "suicide figures plummeted" in Australia after the adoption of the 1996 law. But Australia runs into a similar problem here as with gun control: suicide rates fell substantially during the same period in Canada, the US, and much of Europe.

Moreover, in recent years, suicide rates in Australia and the US have climbed upward again. There's little doubt that suicide rates fell from 1995 to 2006, dropping from 12 per 100,000 to under nine per 100,000. But after that, suicide rates climbed to a ten-year high in 2015, rising again to 12 per 100,000, or a rate comparable to what existed before the 1996 gun measure. In other words, suicides are back to where they were. But as recently as 2017, we're still hearing about how gun control also makes suicides decline.

Overall, this is just the level of discourse we should expect from the media and policymakers on this matter. Even the flimsiest correlation to the passage of a gun control law is assumed to have been the primary factor behind a decline in homicides. Meanwhile, any easing of gun laws that coincides with declining homicides (as happened in the US) is to be ignored. In both cases, the situation is more complicated than reporters suggest.

But don't expect this to be a restraining factor on the drive for new gun laws in New Zealand. In Australia, the 1996 gun control measure was passed only 12 days after the massacre used to justify the new legislation. New Zealand politicians look like they're trying to take an even more cavalier attitude toward deliberation and debate. Meanwhile, in Norway, where Anders Brevik murdered 77 people in 2011—67 of them with semi-automatic firearms—the national legislature didn't pass significant changes to gun control regulations until 2018.