The Economic Cost of Cuban Socialism

Cuba has a sad history. It traded a regular dictatorship for a communist dictatorship six decades ago, and the results have been predictably awful.

Photo by James Garman on Unsplash

Cuba has a very sad history. It traded a regular dictatorship for a communist dictatorship six decades ago, and the results have been predictably awful.

For a while, it was subsidized by the Soviet Union, but that communist system eventually collapsed. More recently, it’s been subsidized by Venezuela, but now that socialist system also is collapsing.

And this means extra hardship for the people of Cuba. 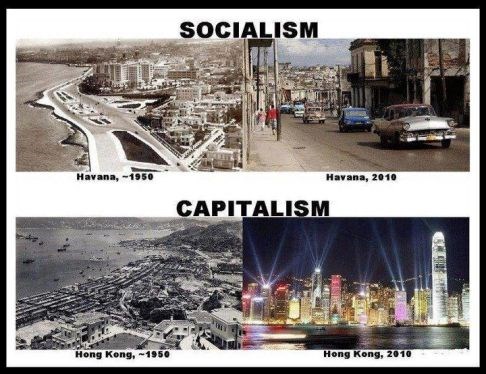 Jose Nino explains one of the grim consequences of Cuba’s central planning.

Cuba is now implementing a rationing program to combat its very own shortages of basic goods. A CBC report indicates this program would cover basic items such as chicken, eggs, rice, beans, and soap. …When Fidel Castro took control of Cuba in 1959, the Cuban state maintained an iron grip on the economy. For decades, the country has been a communist garrison state with very little respect for property rights…

Because of the economic dislocations caused by state control of many industries, the government has had to provide citizens with Libretas de Abastecimiento (supply booklets) to ration out basic goods like rice, sugar, and matches. …Cuba’s recent political behavior indicates that the country’s leadership still does not get basic economics. …After more than 50 years of embracing socialist governance, Cuba will have to learn that it needs to stick to the basic economic principles if it wants to break free from its long-standing cycle of poverty.

Bizarrely, there are still some proponents of the Cuban dictatorship.

Writing for CapX, Kristian Niemietz ponders this lingering semi-support for Cuba on the left.

…socialist experiments usually go through three stages, in terms of their reception by Western intellectuals. The first is a honeymoon period, during which they are widely held up as a glorious example of “real” socialism in action. The second is a period of angry defensiveness, during which some of the system’s failures are acknowledged, but blamed on external constraints. The third stage is the stage of retroactive disowning: intellectuals now claim that the country in question was never socialist, and that it is a cheap strawman to even mention it.

The Western reception of the Soviet Union, Maoist China, Vietnam and, more recently, Venezuela followed this pattern to a tee. Cuba, in contrast, is a bit of an outlier, in that the country seems to be permanently stuck somewhere between stages two and three. It may no longer attract widespread enthusiasm, but Cuban socialism has never completely gone the way of Soviet, Maoist, Vietnamese or North Korean socialism.

Robert Lawson and Benjamin Powell have a book about statism and socialism that’s very informative. But also very entertaining.

Here are some excerpts from their chapter about a visit to Cuba.

In government-directed economies, a disproportionate amount of money is spent on what political leaders desire—typically, great Olympic sports teams, and a few showcase hotels and restaurants to impress foreigners. In Cuba’s case, this included the opulent Hotel Nacional… But we were on a mission to see what life was like inside Cuba’s socialist system. We couldn’t experience that by drinking Cuba libres at a fancy resort… Before the revolution, Cuba had a thriving urban middle class, along with widespread rural poverty. Twentieth-century socialists claimed socialism would deliver greater equality and out-produce capitalism by ending wasteful competition, business cycles, and predatory monopolies.

Socialism hasn’t delivered the goods it promised in Cuba or anywhere else. Today, Cuba is a poor country made poorer by socialism. Socialism also gives tremendous power to government officials and bureaucrats who are the system’s planners—and with that power comes corruption, abuse, and tyranny. It is no accident that the worst democides of the twentieth century occurred in socialist countries like the Soviet Union, Communist China, and Nazi (National Socialist) Germany.

The book is basically a travelogue, mixed with economic insights that oscillate between amusing and horrifying.

Che Is No Good

The hotels are no good.

The Hotel Tritón’s decaying edifice was a crumbling tribute to Cuba’s central-planning problems. Cuba had the resources to make large capital investments in state-run enterprises when it received aid from the Soviet Union. But many of these hotels can’t generate enough revenue to sustain the initial investment. Cuban government planners then had to pick which hotels to subsidize to prevent decay. The Hotel Tritón didn’t make the cut.

It was rotting, inside and out. And nobody cared because nobody owned it. …In a capitalist economy, entrepreneurs create businesses to make profits, which they earn by pleasing their customers. But in a socialist system, a bureaucrat decides which businesses can open, where they can operate, and what they can sell, and he really doesn’t care what the customer thinks. Adopting a socialist system is like turning your whole economy into a giant Department of Motor Vehicles.

The shopping is no good.

In Central Havana, the lack of commerce unrelated to tobacco, alcohol, or sex was striking. Habaneros lived in these neighborhoods. So where did they shop? …We found one store that was a large open room with high ceilings and cement support columns. …behind a counter, there were shelves with bottles of rum, cases of the local cola, a few canned goods, cartons of eggs, and large sacks of rice next to a scale. A line of Cubans shopped their way down the counter. The place was an odd mix, somewhere between the worst imaginable version of a grade school cafeteria and a grocery in which 95 percent of the stock is depleted.

The dining is no good.

… we decided on our last evening on the island to try a state-owned “Italian” restaurant on the main boulevard between the s***ty Hotel Caribbean and the Capitol. We were disappointed to see that Italian meant nothing more than a few basic pizzas and a couple types of pasta, along with the same chicken, pork, seafood, and beef dishes we found everywhere else. We ordered two beers and “mozzarella from the oven” as an appetizer.

To say that it was the equivalent of Taco Bell queso with tomato chunks in it would be insulting to Taco Bell. In fact, it was a steaming pot of greasy white goo. … most Cubans can’t afford to eat at the places we ate, and Cuba’s socialist economic system can’t even deliver variety to rich tourists. We were tired of the food after a week. But we could leave; Cubans are stuck with lousy food (outside the private restaurants), limited ingredients, and little variety for as long as they’re stuck with socialism.

And Che is no good.

Unfortunately for Cubans, Che wasn’t nearly as good at planning production as capitalists have been at plastering his image on merchandise. During Che’s stints as head of the National Bank of Cuba, minister of finance, and minister of industry, Cuba not only failed to industrialize (as promised), but its sugar production collapsed and severe rationing was introduced.

But Cubans are very good, at least when they’re out from under the tyranny of socialism.

We were in Little Havana, in Miami. The economic contrast between Little Havana and the real thing began before we even stepped out of our Uber. The half-hour car ride cost us only $13.72 instead of the absurd taxi costs in Cuba. …Unlike stores in Cuba, this store had hundreds of different items for sale. …we headed off to a Cuban restaurant for dinner. The six-page menu contained more options than we had seen from all of the restaurants in Cuba combined.

By the way, I recommend the book.

There are also chapters about Sweden, Venezuela, North Korea, China, Georgia, and Russia/Ukraine.

My contribution today is this chart showing per-capita economic output in various Latin nations, derived from the Maddison database. At the time of the revolution, Cuba (orange line) was one of the richest nations. Now it has fallen far behind. 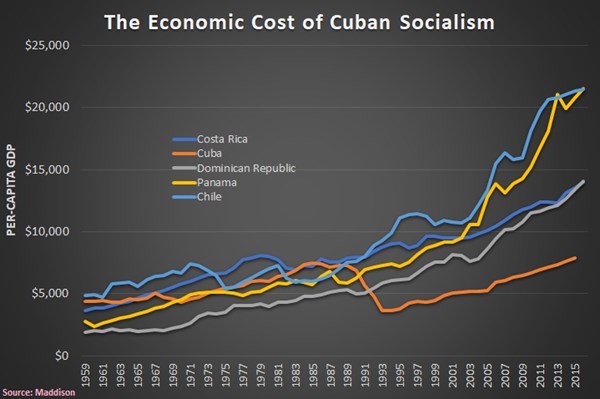 It’s always useful to look at decades of data because short-run blips aren’t a factor. Instead, you really learn a lot about which nations are enjoying good growth and which ones are stagnating.

What we’ve learned today is that the people of Cuba are poor because of awful economic policy. Other nations (most of which started in worse shape) have become much richer.

Perfect policy would be great, but even decent policy creates enough “breathing room” for more prosperity. Unfortunately, even that’s not allowed in Cuba.

P.S. For some unintentional Cuban-related humor, see here and here.