The Climate Complex Strikes Back

Was the New York Times piece against Willie Soon a hit job?

Climate-change skeptic Willie Soon may be an unethical, corporate-bought climate-change denier or the latest casualty of the Climate-Industrial Complex’s immune response.

He has accepted more than $1.2 million in money from the fossil-fuel industry over the last decade while failing to disclose that conflict of interest in most of his scientific papers. At least 11 papers he has published since 2008 omitted such a disclosure, and in at least eight of those cases, he appears to have violated ethical guidelines of the journals that published his work.

Something’s fishy here. Because all researchers get money from somewhere, it’s strange that none of the “eight” journals required Soon to disclose as a condition of publication. Given his reputation as a skeptic, didn’t they even think to ask? And, indeed, if there really is a universal ethical standard, aren’t the journals that published Soon also in violation of the ethics?

To find out whether Soon acted inappropriately and outside of research ethics, we really have to know whether that disclosure standard applies across the board. In other words, of the hundreds of journal articles published over the last few years, how many authors disclosed their funding sources — public, private, corporate, or nonprofit?

If there is indeed a known ethical standard of disclosure to which the vast majority of researchers adhere, then it might be appropriate for the Times to single out Soon for a failure to disclose. (The Times offers no such context, no such data.) However, if a majority does not disclose its funding sources, then there is clearly no well-defined ethic of disclosure and the Times is simply inventing an impropriety to ruin a man’s career as a scientist.

The idea that a government grant comes with no agenda should be preposterous on its face. After all, who has more to gain from “action on climate change” than the very people providing the research dollars and their solar-powered cronies? The members of the Climate-Industrial Complex have enormous incentives to hide the decline, cook the books, and keep the funds flowing into their department coffers and crony projects. And those with taxing authority — that is, those who hold the government purse strings — have an even bigger incentive.

To put this into perspective, consider the following, reported by Climate of Corruption author Larry Bell in Forbes:

According to the GAO, annual federal climate spending has increased from $4.6 billion in 2003 to $8.8 billion in 2010, amounting to $106.7 billion over that period. The money was spent in four general categories: technology to reduce greenhouse gas emissions, science to understand climate changes, international assistance for developing countries, and wildlife adaptation to respond to actual or expected changes. Technology spending, the largest category, grew from $2.56 billion to $5.5 billion over this period, increasingly advancing over others in total share. Data compiled by Joanne Nova at the Science and Policy Institute indicates that the U.S. Government spent more than $32.5 billion on climate studies between 1989 and 2009. This doesn’t count about $79 billion more spent for climate change technology research, foreign aid and tax breaks for “green energy.”

These sums are only what the US government is spending. Global spending is simply staggering. 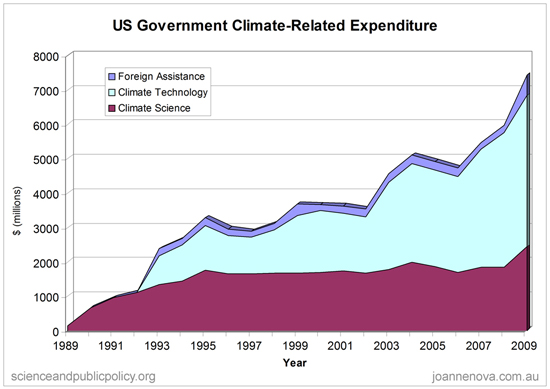 More generally, anyone who funds anything is almost always looking for a certain kind of result. Therefore, any standard of disclosure must apply to any and all scholars equally, no matter the funding source.

That government money shouldn’t corrupt is just another application of the Unicorn Fallacy so common among well-meaning greens. Unfortunately, because so many people are under the illusion that “public” money is not a corruptive influence in science, it may be that those who receive it are far more willing to disclose a government grant than a private one — whatever the quality of the research. Or, it might be that journal committees simply don’t require researchers on the government dole to disclose. (The Times offers us no such context in the case of the journals Soon contributed to.)

Here is some more eel-like journalism from the Times:

Charles R. Alcock, director of the Harvard-Smithsonian Center, acknowledged on Friday that Dr. Soon had violated the disclosure standards of some journals.

“I think that’s inappropriate behavior,” Dr. Alcock said. “This frankly becomes a personnel matter, which we have to handle with Dr. Soon internally.”

Notice the weasel phrase “disclosure standards of some journals.” Some? Isn’t this supposed to be a standard that applies to all? And how should Alcock handle the purported violations of some of the journals? We don’t know because we are only seeing the part of the conversation the Times wants us to see, to infer something, ur, uh, “inappropriate.”

Still, what if it is both true that Soon violated accepted norms of disclosure relative to peers, and that he did so because he was afraid that to disclose his sources would lead to accusations of bias? Then we have to separate questions about Soon’s integrity from questions about his research.

In the former case, there is an army of fanatical climate-change activists ready to pounce on anyone who presents any evidence that runs counter to their apocalyptic narrative. (Remember, professional climate-change activists have a huge stake in the outcome of this debate, too. Climate-change donations are quite the gravy train, and that Prius isn't going to pay for itself.) Indeed, if climate-change heretics like Soon can only get research funding outside the Climate-Industrial Complex, should we expect researchers with unpopular findings to erect billboards advertising their sources?

For us to ask such questions is not meant to absolve Soon or anyone else of abandoning generally accepted disclosure standards; it is merely to say that the very climate-change activists who wrote the Times piece know full well that this is the sort of incentive they create when they go on witch hunts for “deniers.” Climate-change science has become a hostile environment for skeptics. Science itself becomes the casualty of such hostility, which brings me to the latter point — that is, the quality of Soon’s research.

Even if we found evidence that Soon was the most avaricious villain and corporate toady the world had ever seen, would any purported wrongdoing invalidate his actual scholarship?

Anyone who has ever had a course in logic knows the unequivocal answer is no. Research is either accurate or inaccurate, whatever the source.

Notice that at no point in the Times article did the authors — or anyone quoted by the authors — actually attack Soon’s specific scholarship. Sure, the Times makes vague innuendo, as with this quote:

Many experts in the field say that Dr. Soon uses out-of-date data, publishes spurious correlations between solar output and climate indicators, and does not take account of the evidence implicating emissions from human behavior in climate change.

Many experts like whom? The only quote they provide is from Gavin Schmidt of the activist website RealClimate.org, who says, “The science that Willie Soon does is almost pointless.” In other words, this Gavin Schmidt:

We don’t want, like the Times, to import an ad hominem fallacy. But of all the innuendo, why are we being asked to believe only that of the world’s foremost climate activists? Innuendo is convenient, but it is not conclusive.

Maybe Soon’s research is bad or misleading or somehow just wrong. But in science, this is where the rubber hits the road. And the Times fails to deliver in demonstrating that Soon’s scientific work is incorrect, wherever he got his research money. And that makes this Times piece just the sort of agitprop we have come to expect from the Grey Lady.

Now, what if Soon is right, for example, about the relative effects of the sun (versus humans) on the climate system? There are thousands of jobs, thousands of reputations, billions in funding, and trillions of future carbon tax revenues at stake. You think they’re going to let this flea continue to irritate the hide of Leviathan?

But let us be clear: the point of the Times article was never to find out whether Soon’s research was correct. The point is to use innuendo to push a heretical researcher to the margins of science — or perhaps out altogether — so that the powers behind the Climate-Industrial Complex can get to that multitrillion-dollar pot at the end of the rainbow.

The Times goes on to say: “The documents show that Dr. Soon, in correspondence with his corporate funders, described many of his scientific papers as ‘deliverables’ that he completed in exchange for their money. He used the same term to describe testimony he prepared for Congress.”

As everyone knows, deliverables are work products. Sometimes deliverables are paid for by companies, sometimes by governments, sometimes by NGOs. But as someone who has worked in the nonprofit sector for a long time, I can tell you that any time someone gives you a grant, they are expecting you to do some work. And, indeed, they may specify just what sorts of work products you are responsible for producing as a condition of receiving the grant. In other words, they will want deliverables.

Now, does that mean that the “deliverable” in question was research that had packaged into it a specific, predetermined result? Of course not. We should be under no illusions, however: if Soon’s deliverables suddenly started containing messages that did not comport with what the grantors want to hear, the grants might very well dry up. But this is no less true for scientists who fail to produce results that jibe with the “consensus” message that government grantors and climate NGOs are fond of. So why should questions about financial influence only be applied to skeptics?

We should very well expect that the Climate-Industrial Complex and its handmaiden, the Grey Lady, will be looking for blood wherever they can find it. And if we want to talk about bias being bought and paid for by corporate masters, one need look no further than the authors of the Times article — whose omissions and double standards are so bald that Balance, that fair goddess of journalism, weeps.