Thanks to Economic Freedom, America Still Outperforms Other Nations in Standard of Living

The bottom line is that rich nations can consistently out-perform poor nations if they allow more economic freedom.

Image by frank mckenna on Unsplash

If my column is about the former, I generally complain about excessive spending, punitive taxation, senseless red tape, easy-money monetary policy, and trade protectionism.

But if I’m writing about relative levels of economic liberty, I often turn into a jingoistic, pro-American flag-waver.

That because—with a few exceptions such as Singapore, Hong Kong, New Zealand, and Switzerland—the United States enjoys more economic freedom than other nations. 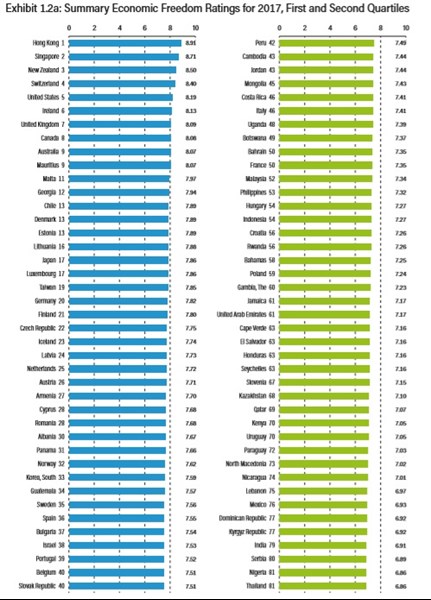 And because of the relationship between policy and prosperity, this means that Americans tend to have much higher living standards than their counterparts in other nations. Even when compared to people in other developed countries.

(Which is why it’s so disappointing that many American politicians want to make the US more like Europe.)

If you want to answer questions about how economic wellbeing for individuals in a country has evolved, the actual change in the value of real GDP per capita may tell you more than the rate of its change. Why? Individuals buy goods and services with dollars and cents — not the rates of change that economists, politicians, and pundits tend to focus on when it comes to growth. …By this metric, between 2016 and 2019, economic growth in the U.S. was the best in its class. …The U.S. surpasses…its peers…by no small margin. It bests the silver medalist in this category, Finland, by $1,100. That is almost as big as the $1,160 that separates the runner-up from the peer country that comes in dead last, Sweden.

Here’s the chart from his article.

The key takeaway is that Americans started the period with more per-capita GDP and the US lead expanded.

That’s one way of looking at the data.

A 2017 report from the Pew Research Center also has some fascinating numbers about the relative well-being of the middle class in different nations.

And if you peruse the chart from the Pew Report, you’ll notice that a lot of middle-class Europeans would be lower-income if they lived in the United States. 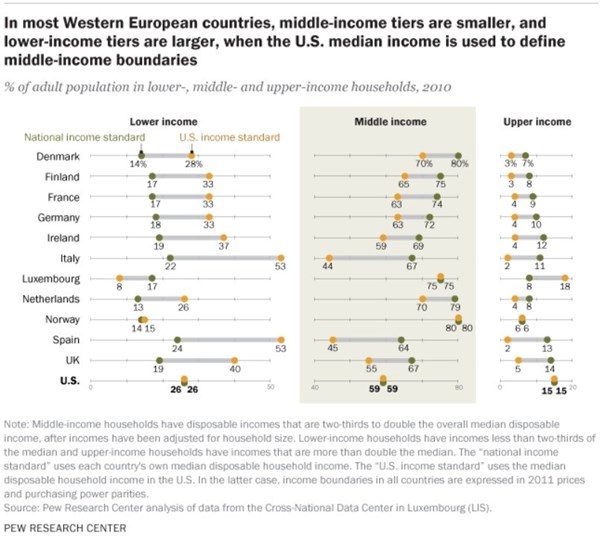 And if you looked at the issue from the other perspective, as I did last year, many poor Americans would be middle class if they lived in Europe.

Let’s augment that analysis by looking at a graphic The Economist put together several years ago. It’s based on the OECD’s Better-Life Index, which is a bit dodgy since it includes measures such as the Paris-based bureaucracy’s utterly dishonest definition of poverty.

That being said, notice that the bottom 10 percent of Americans would be middle class (or above!) if they lived in other nations. 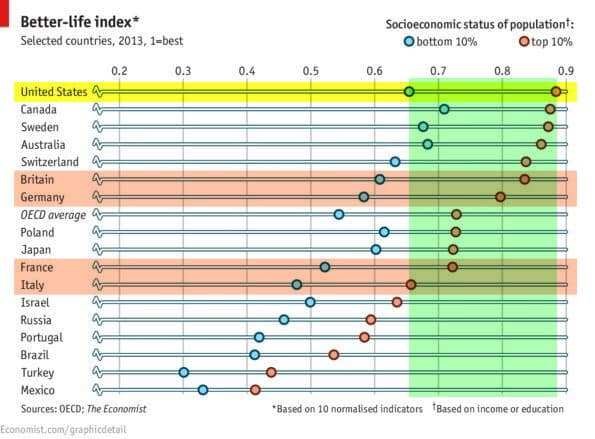 I’ll close with the data on Actual Individual Consumption from the OECD, which are the numbers that (I believe) most accurately measure relative living standards between nations (indeed, I shared data from this source in 2010, 2014, and 2017).

As you can see, the United States easily surpasses other industrialized nations, with a score of 145.9 in 2017 (compared to the average of 100). 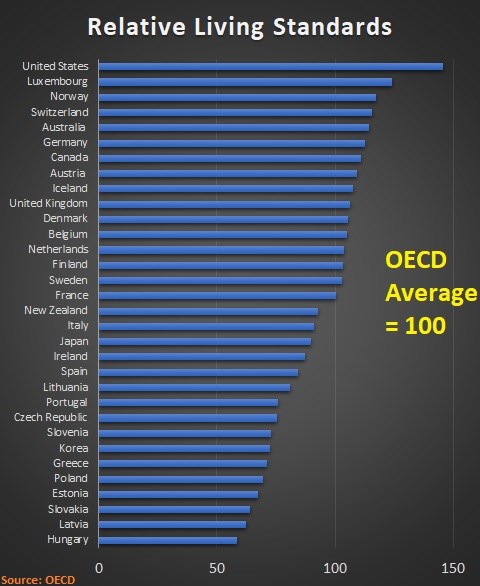 My final observation is that all this data is contrary to traditional convergence theory, which assumes that poor nations should grow faster than rich nations.

In other words, Europe should be catching up to the United States.

Indeed, that actually happened for a couple of decades after World War II, but then many European nations expanded welfare states in the 1960s and 1970s, while the US for more economic freedom under both Ronald Reagan and Bill Clinton in the 1980s and 1990s.

And since policies diverged, convergence stalled.

The bottom line is that rich nations can consistently out-perform poor nations if they have more economic freedom.

P.S. Not only do ordinary Americans have a big edge over their European counterparts, they also enjoy much lower taxes.