Tax Withholding Is Miracle-Grow for Government

The internal revenue code is a reprehensible mess that torments taxpayers and undermines American competitiveness. 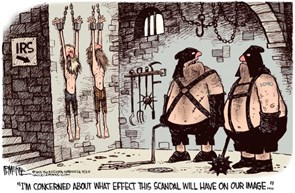 The good news is that Americans don’t like the tax system.

The bad news is that they don’t dislike it nearly as much as they should. At least in my humble opinion.

There are two reasons for the inadequate level of disdain.

For those of us who want to scrap the tax system, this is a challenge.

And I’m not shy about admitting the problem.

About three-quarters typically get money back, with refunds so far this year averaging almost $3,000. For many, it will be the single biggest payment they receive all year. …the fact that so many people are getting paid by the IRS, and not the other way around, takes some of the edge off a day when they’re trying to stoke public anger at the tax system. “The fact that people are looking forward to tax time rubs me the wrong way,” said Dan Mitchell, a tax expert at the libertarian Cato Institute. “I would like them to be upset.”

I also have a good idea of why the problem exists.

It’s withholding. And it started back during World War II. Here’s some background.

During the war, tax rates went up, and a broader number of people were expected to pay them. Professor Anuj Desai from the University of Wisconsin Law School said there was a saying that income tax went from “a class tax to a mass tax.” …“The thought was that if we withhold a little bit every bit every paycheck, people won’t have to worry about the problem of coming up with a huge chunk of money,” Desai said. But withholding is also a remarkably efficient way for the government to raise money, and policymakers knew that. …“You could never have the taxes that were levied during World War II without withholding. It was absolutely essential for that purpose,” economist Milton Friedman said in an interview… Friedman worked with the Treasury Department at the time withholding was introduced. Withholding stuck around after the war, much to Friedman’s chagrin. “Unfortunately, once you got it installed, it’s almost impossible to get rid of it,” Friedman said. “It’s too useful to the people in power.”

Jeffrey Tucker of the Foundation for Economic Education elaborates.

The problem is…the withholding tax. Instead of being collected directly from the payer, the government collects them “at the source,” which is to say that they are collected from the institution that pays wages and salaries — on behalf of the taxpayer. …one of the most amazingly brilliant innovations of the modern state. This tinkering with the system — the creation of the institution called withholding — has created an illusion that paying taxes is really about getting free money! When the check arrives from the government a month or so later, the taxpayer is actually tempted to think: wow, this is really great! A pillaging has been spun to look like a gift. …Withholding dramatically changed the psychology of paying taxes. It almost feels like you aren’t paying any at all. The worker gets used to how much after-tax income she makes and adapts to it quickly. Then when tax time arrives, there is no more to pay. Instead you file and find yourself on the receiving end of what seems like an unexpected gift of a check from government. Yet in reality your refund is nothing more than the belated return of a zero-interest loan you were forced to provide the government.

Every time I talk to somehow who is happy about a refund, I ask them whether they will give me an interest-free loan instead. After all, I’d be happy to collect money from them all year long and then return it the following April.

Jeffrey points out how the political dynamics of tax day would change in the absence of withholding.

If we really wanted to make a wonderful change in favor of transparency and decency, one that would mark a shift in people’s perceptions of the costs of government, the withholding tax could just be repealed completely. …every taxpayer would pay the full amount owed to the government every April 15 and otherwise receive full compensation the rest of the year. Such a seemingly small change would have a dramatic effect on public perceptions of taxation and government. Even from the age of 16, every citizen would have a more pungent reminder of the costs of government. We would no longer live the illusion that we can all get something for nothing and that government isn’t really expensive after all.

Ben Domenech of the Federalist agrees.

The overwhelming majority of Americans pay their taxes by having them extracted from their paychecks before they ever see the money. Operating under the fiction that the government is giving you money as opposed to returning what it has already taken is damaging to the psyche of the nation’s taxpayers. …Withholding was originally mandated as a wartime step, but its continuation since then disguises the property rights involved, essentially offers the government an interest free loan, and shields taxpayers from the ramifications of federal spending. The country would be better off if everyone experienced what entrepreneurs and business owners do: writing the most sizable checks every year to the government, and watching that hard-earned money walk out the door.

By the way, this isn’t merely impractical libertarian fantasy.

There’s a real-world example of a tax system where people actually write checks to the government and are much more aware of the cost of the public sector. It’s called Hong Kong, which is – not coincidentally – an economic success story in large part because of a good fiscal system.

And I would argue that good fiscal system exists because taxpayers are directly sensitive to the cost of government (it also helps that there’s a spending cap in Hong Kong).

Let’s close with some government propaganda. This Disney cartoon was produced before withholding. As you can see the government basically had to make the case that people should set aside money out of their paychecks so they would have enough money to make periodic tax payments.

This was a plausible case when seeking to finance a war against National Socialism and Japanese imperialism. It wouldn’t be nearly as persuasive today when the government seems to specialize in financing waste, fraud, and abuse.

P.S. At the bottom of this column, you can watch a much better cartoon from the 1940s.