There’s an easy way to judge whether countries have good economic policy or bad economic policy. Simply look at the Fraser Institute’s Economic Freedom of the World and check out a nation’s absolute score as well as how it ranks relative to other nations.

The EFW report even allows readers to see how nations score in the five major policy areas that are used to produce the overall grade. These categories are:

This last category sometimes doesn’t get enough attention. I sometimes refer to it as the rule-of-law measure. It’s basically a way of trying to estimate whether government is doing a good job with institutional public goods. The variables used include 1) Judicial independence, 2) Impartial courts, 3) Protection of property rights, 4) Military interference in rule of law and politics, 5) Integrity of the legal system, 6) Legal enforcement of contracts, 7) Regulatory costs of the sale of real property 8) Reliability of police, and 9) Business costs of crime.

Let’s look today at property rights. And I’m motivated to address this issue because of some horrifying news from South Africa. The Wall Street Journal opined on the issue on March 1.

No country ever became rich through its government’s seizure of private property (exhibit A: the Soviet Union), but politicians in South Africa want to give it another go. That’s the disheartening news from Cape Town this week, where the National Assembly voted 241–83 on Tuesday to start a process to amend the constitution and allow land expropriation without compensation.

When I saw the headline and read the opening paragraph, my initial instinct was, “so what?” After all, the whites probably stole the land from the blacks in the first place.

But then I found out that issue already has been handled.

Post-apartheid, the government bought land and offered compensation to South Africans whose property had been forcibly seized after 1913. Many of those claims are now settled… According to a 2016 Institute of Race Relations survey, less than 1% of South Africans think land is one of the country’s “serious unresolved problems.” Unemployment, public services, housing and crime rank far higher.

What’s actually happening is hard-core leftist populism. And it may turn South Africa into another Zimbabwe.

Julius Malema of the far-left Economic Freedom Fighters party…believes the state should be the “custodian” of the nation’s property… His party says the expropriation “should apply to all South Africans, black and white.”

Huh? Stealing property from everybody, regardless of race, while calling your party Economic Freedom Fighters?!

I guess their idea of freedom means freedom to loot, which is sometimes called—rather perversely—positive liberty. But I shouldn’t laugh too hard because the United States actually had a president with the same twisted mindset.

In any event, the WSJ reminds us that this won’t produce good results.

The idea is likely to duplicate the awful experience of Zimbabwe during the Robert Mugabe era, a case study in the reality that bureaucrats can’t distribute resources more efficiently or productively than private markets. Mugabe’s confiscations spooked investors, the agricultural industry collapsed, and a once prosperous country became known for hyperinflation and poverty. …the ruling African National Congress is supporting the measure to distract attention from its own failed statist economic policies, which have produced subpar growth and denied opportunity to poor South Africans. …South Africa needs more capital, more investment and a favorable business environment. Seizing private property has produced misery everywhere it has been tried.

This is very troubling, especially since South Africa, compared to other nations on the continent, maintained semi-decent policies after dismantling the racist apartheid regime.

I wrote back in 2014 about South African economic policy and shared data about the nation’s EFW score. I was worried about the trend, and I’m now even more pessimistic. 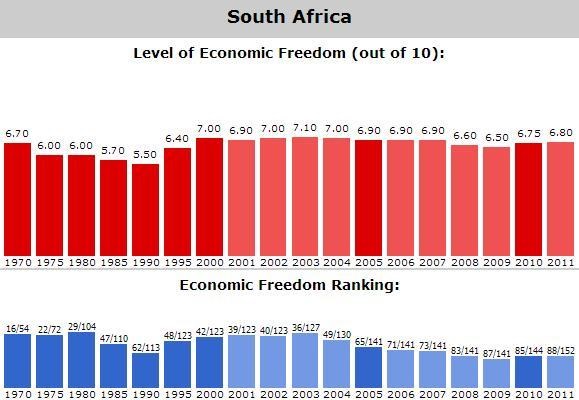 Since today’s topic is property rights, let’s look at the global scores from the International Property Rights Index, which is published each year by the Property Rights Alliance.

As you can see, South Africa currently is in the second quintile. Best score of any African country, and above some European nations as well. 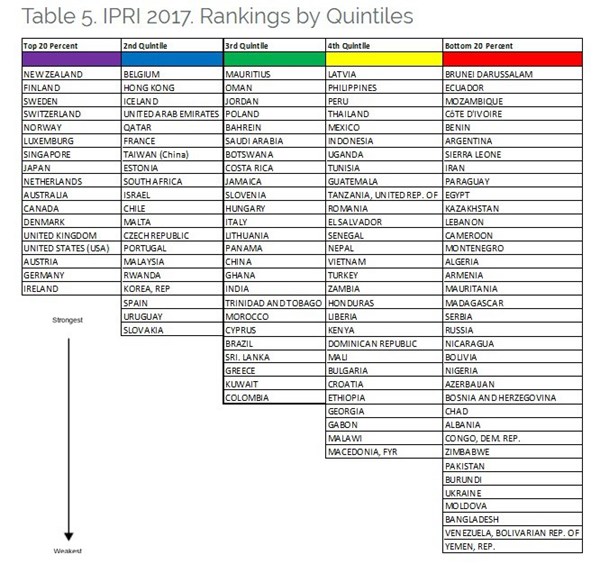 But if the South African constitution is changed and land expropriation is allowed, it’s a foregone conclusion that the country will suffer a precipitous fall in the rankings.

And here’s the map accompanying the study. The bottom line is that blue is good and purple/maroon (or whatever that color is…mauve?) is bad. 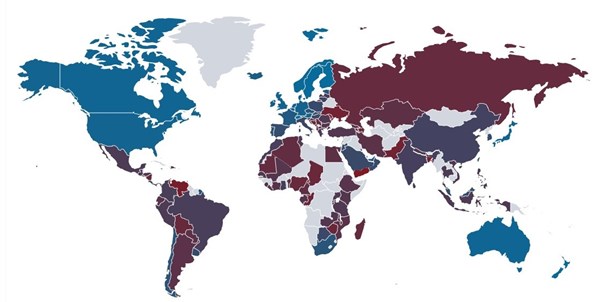 Switching to other nations, notice that all the Nordic nations are highly ranked. Indeed, they hold three of the top five slots. No wonder they score highly in that part of Economic Freedom of the World. Moreover, they also get very good scores for monetary policy, regulatory policy, and trade policy. Which explains why their economies get decent performance notwithstanding very bad fiscal policy.

And I’m certainly not surprised that New Zealand has the top spot.

The United States also does reasonably well. Not in the top 10, but at least in the top quintile.

P.S. In addition to moving in the wrong direction on property rights, South African politicians are making the tax code more destructive.

P.P.S. There is a country in sub-Saharan Africa to emulate.