Do you know what inspired the great Frederick Douglass finally to escape from slavery? He was working for a man in Baltimore, Maryland, and getting paid at the end of the day. He took his earnings to his master, who then decided how much Douglass could keep. This struck him as inherently unjust, a wicked symbol of servitude.

He fled to freedom because he wanted to realize and retain his full value in the marketplace. Effectively, he cut out the middle man, the coercive hand that presumed to control his life and property. It was then that he truly began to live a full life.

So it has been since slavery finally was finally abolished in the United States. Markets and commercial culture have been the respite from servitude, the enabler of social peace, the means by which justice is realized, and a source of empowerment for all peoples. Markets turn tension to harmony, injustice to personal fulfillment.

But when government intervenes, much like the role of Douglass’s master, it creates conflict, unfairness, and harms people’s capacity to work toward a more peaceful and prosperous world.

This is the message I gain from a poll released last week. It reveals that both blacks and whites think race relations are generally bad, and by wide margins. In general, two-thirds of survey respondents say that people are not getting along and that tension is high.

The striking fact: This is the reverse of what people believed in the days after the election of Barack Obama, the nation’s first black president.

American civic culture has always treated the presidency as some kind of mystical pinnacle, a beautiful bellwether of where we are as a people and where we are headed as a country. The idea is that we all look to the great man to set the tone and shape the character of us as a people.

Surely, then, because most everyone but a few trolls wants peace, understanding, and cooperation between blacks and whites, the best path forward is to elect a person of color. Surely that will fix something. Right?

Of course it did not. It’s one thing to observe little improvement in these poll numbers but it is quite something else to see them flip to reveal more despair than ever.

During Mr. Obama’s 2008 campaign, nearly 60 percent of blacks said race relations were generally bad, but that number was cut in half shortly after he won. It has now soared to 68 percent, the highest level of discontent among African Americans during the Obama years and close to the numbers recorded in the aftermath of the massive riots that followed the 1992 acquittal of Los Angeles police officers charged in the beating of Rodney King.

The presumption that a black presidency would repair the US race problem trivializes the on-the-ground reality. It presumes that people will respond to symbolism, to identity, to the perception of a new form of power-sharing in society, regardless of reality. Something similar is emerging in the case of Hillary Clinton: her womanness will surely bring new forms of gender justice and therefore harmony between the sexes. Based on the experience with Obama, we can look forward to a similar shot of optimism followed by a dramatic reversal of fortunes.

But let’s dig just a bit deeper into the polls, because it reveals something interesting. Though the news was buried in the story, the polls show a huge chasm between people’s macro and micro perceptions. It turns out that when people are asked about their own communities, which is to say their own lives, the picture is much brighter. Fully 77% said that race relations are good at this level — a number that has not changed in 20 years.

In other words, in terms of people’s experiences in daily life, we find evidence that both blacks and whites get along pretty well. And what does this mean? How do the races typically encounter each other in their own lives? Mostly it is through commercial settings. Shopping, trading, working, and engaging in all the normal activities of life, people find common interests despite their differences. Or it takes place in our social lives: at our houses of worship, the community pool, the neighborhood barbecue. On this very human level, it would appear that matters are better.

So in what respect do people perceive problems? It is when they reflect on the larger picture, which usually involves perceptions of politics and official institutions. Here is where differences manifest themselves. And in this respect, what has changed so dramatically over the past six years to signal new levels of racial tension? It is in the new every day: It is the treatment of blacks by civic institutions, meaning cops and criminal justice in particular. Here lies a major source of the problem.

You can see this in the data too. Here are the charts on how police treat people by race. 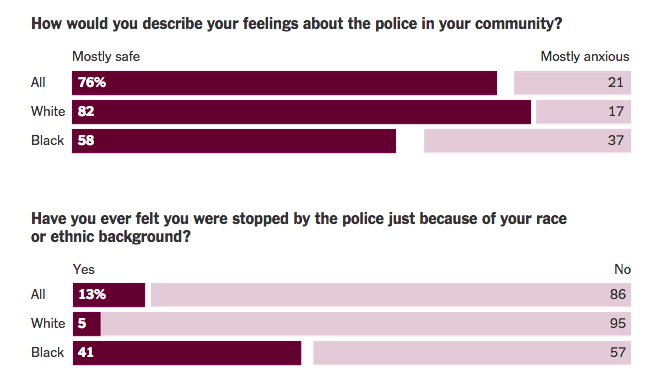 These are wide disparities. Among whites, 82% feel safe concerning the police, but only 58% of blacks say the same. Only 5% of whites believe that they have been singled out by police because of their race. Among blacks, 41% believe that — which is quite high (though not as high as I might have expected).

The polls are surely affected by the daily barrage of YouTube videos coming out that show horrendous treatment of black people by police. For white Americans, this has been a remarkable parade of injustice, causing a serious consciousness-raising on the part of every white person I know. Everyone has noticed has much more militarized policing has become over the last couple decades, but the problem is felt particularly intensely by blacks, who are disproportionately harmed by harassment and abuse.

My friend T.K. Coleman, who is black, posted a note a few days ago about his own experience. He and his wife were detained, handcuffed, and questioned for absolutely no reason. His account is harrowing.

There’s this naive idea floating around that people should never be afraid of cops as long as they’re innocent and compliant. For a lot of people in this country, that’s simply not true. …

But if we want to have intelligent discussions about authority in this country, we have to stop using a logic that tells us that people in authority always have a fair reason for doing what they do. We do a lot of talking about what people can do to avoid being abused by cops.

We don’t talk as much as we should about the abuse that happens to people who follow all those instructions. If we can’t question authority, we are doomed.

What we can tease out of these polls is the single most striking fact about human relationships. When they are politicized, and when we rely on government to rule our associations with others, the result is less harmony and more tension and injustice. But when we let go and let voluntary human associations take over, letting people trade and keep property and make decisions for themselves and cooperate as equals, we see progress toward what most everyone wants: peace, harmony, and mutually beneficial engagement.

The implications of this realization are epic. For hundreds of years, governments at all levels have been interfering in race relations, favoring or disfavoring one group or another, sometimes in petty ways and other times in egregious ways. In taking this path, governments have done no one any favors. And today, government remains the single biggest obstacle towards a more harmonious social life of inclusion and free association.

In these last days of his presidency, Obama has finally turned his attention to the problem of criminal justice and the horrible problem of prisons. Finally! I have no reason to doubt his sincerity, even if it turns out to be too little and too late. To the extent he manages to reform the system, removing the boot from the neck just a bit, he will have made his greatest contribution toward racial reconciliation.

In the long run, no one benefits from top-down control. If we are to forge good lives and good communities for ourselves, it is going to be by deferring to the emergent processes of social and economic engagement, one person at a time. Government divides people; markets bring us together.

Frederick Douglass made a courageous decision to seek his own freedom as a path to realizing his highest value in this world. He did this by saying no to the master who presumed to rule his life and property. So must we all.