Pit Bulls Are Neither Monsters Nor Teddy Bears

The demonization of pit bulls has been fading. But it does the dogs a disservice to misrepresent them as "nanny dogs." Pit bulls are athletes, and need exercise and sport.

Some years ago, I found myself sitting with three friends outside a bar near a mountain in Phoenix, Arizona. As we surveyed the foot traffic to the desert hills, we saw a surprising number of people with pit bulls. Perhaps motivated by the amount of beer consumed, one of my friends announced that he was going to purchase a pit bull. Another turned to him: “That’s terrible. Those dogs will kill you.” The third chimed in: “What? Those dogs just want to cuddle—they’re over-sized lap dogs.” Neither deterred him in his task, and he recently reported to me that both of our compatriots were wrong that day. Pit bulls are neither killers nor cuddlers.

Polarized opinions about pit bulls have created “the pit bull wars,” a public battle over the temperament, breeding history, and place in society of pit bulls. In Pit Bull: The Battle Over an American Icon, Bronwen Dickey says that the castigation of pit bulls began in the 1970s and reached fever pitch in the 1980s. Pit bulls gained a reputation as aggressive fighting dogs and guard dogs during the “crack epidemic” of the 1980s. This reputation was largely baseless, but it was very public. Throughout the 1990s, many local governments enforced breed-specific bans on pit bulls because of the story that the dogs had been bred for one purpose only: to fight “in the pit.” 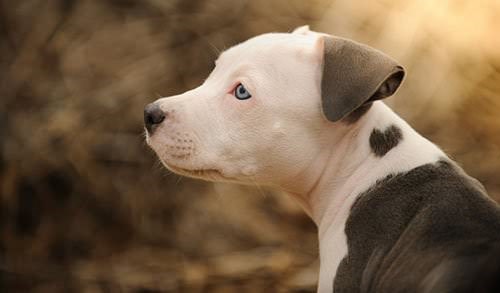 But in 2005, Hurricane Katrina struck New Orleans, and rescue workers took in hundreds of pit bulls. Not long after, Michael Vick, at the time quarterback for the Atlanta Falcons, was busted for running a dog-fighting ring, out of his home in rural Virginia. Fifty pit bulls were seized from his property during the investigation. Most were rehabilitated and eventually placed in homes with families. After years of talking about their bad reputation, American society began reconsidering pit bulls.

Revisionist wives’ tales that paint pitbulls as teddy bears can be as misleading as the demonizing portrait of pit bulls as drug dealer dogs.

As a result, the pit bull has regained some of the reputation it enjoyed before its vilification in the 1970s. The dogs were once used as some of the most successful acting dogs of all time. Pete the Pup of Our Gang and Little Rascals fame was a pit, and the dogs were used as mascots at a handful of universities, including Harvard and Columbia, in the early twentieth century. Two pit bulls participated in World War I battles alongside American troops, including a dog named “Sergeant” Helen Kaiser, who survived mustard gas attacks and shrapnel wounds and was awarded the French Croix de Guerre two times for bravery. Pit bulls were subsequently deployed as American military police dogs in World War II.

In fact, pit bulls were the symbol of American fortitude through the Second World War. Recruiting posters for the military used the pit bull to represent America, as against the English bulldog, German dachshund, and Russian wolfhound. Although not the biggest dog, the pit bull was thought to be affable but not obsequious, friendly but, if necessary, fierce—qualities that distinguished America from the rest of the world.

While the pit bull has regained its good reputation, one potential ill effect of the country’s reappraisal of the dog is the proliferation of revisionist wives’ tales—for example, the claim that pit bulls were once used as “nanny dogs.” Tales like this paint a picture of the pit bull as a larger version of a teddy bear—an animal that loves cuddles and sugar and spice and everything nice. This can be as misleading as the demonizing portrait of pit bulls as drug dealer dogs.

Dickey describes the time she spends with Diane Jessup, a pit bull advocate and trainer whose website is dedicated to upholding the tradition of pit bull as working dog. For Jessup, pits aren’t cuddly dogs at all, and those who treat them as such are doing the dogs a great disservice. Pit bulls want to work; they’re athletes who need exercise and sport.

That pit bulls find advocates and critics who tell such divergent stories on their behalf indicates two things. First, pit bulls possess a wide range of capabilities, ranging from couch-potato friendliness to the fierce disposition of the working, athletic dog. Second, they evoke uniquely strong reactions from human beings, for good and ill. Both facts mean that these dogs are worthy of consideration and deep investigation no matter the reader’s initial opinion of them.

I do wish, however, that Dickey’s conclusion told us a bit more about the dogs themselves—or, rather, gave us an account of what is so unique about these dogs. “Pit bulls are just … dogs,” she says near the end of the book. Well, yes they are. But that bland statement can’t suffice to explain the amazing love and loyalty that human beings show toward the dogs. It also can’t explain why the dog has so many enemies.

Nevertheless, Bronwen Dickey’s Pit Bull is an impressive feat of investigative reporting for one volume. The writer maintains a remarkable balance of generosity of spirit toward her subject and critical analysis. While this reviewer may want a more robust account of what pit bulls are, it is certainly the case that Dickey has prepared readers to ask the question by clearing away myths that have dominated our understanding of these dogs for half a century. This is a job well done and a book worth picking up.